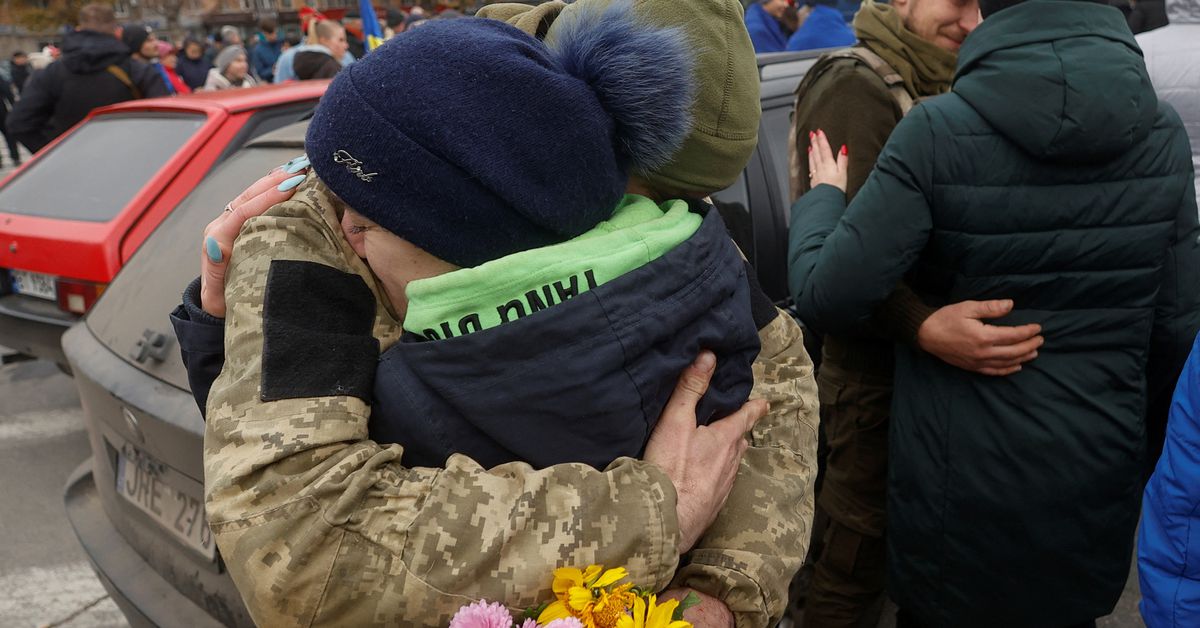 “Investigators have already documented more than 400 Russian war crimes. The bodies of dead civilians and soldiers have been found,” Zelensky said in a video address Sunday night.

“The Russian army left behind the same barbaric acts that it committed in other parts of the country,” he said.

Reuters could not verify his allegations. Russia has denied that its forces deliberately targeted civilians.

Mass graves have been found in Ukraine since the offensive began on February 24, including civilian bodies showing evidence of torture found in the Kharkiv region and Bucha, near Kyiv. Ukraine has accused the Russian military of committing these crimes.

In October, a United Nations commission said war crimes had been committed in Ukraine and that Russian forces were responsible for the “vast majority” of human rights abuses in the early weeks of the war. Read on

Ukrainian troops moved into the heart of the southern Kherson region on Friday after abandoning the only regional capital Russia has captured since Moscow launched its offensive.

Villagers with flowers lined the streets of Kherson to welcome Ukrainian soldiers on Saturday to take control of the right bank of the Dnipro River. Read on

It is Moscow’s third major retreat of the war and the first to defeat an occupied city large enough to face a major Ukrainian counteroffensive using US-supplied High Mobility Artillery Rocket Systems (HIMARS).

The United States will announce new sanctions on Monday against an international network of individuals and companies working to obtain military technology for Russia’s war in Ukraine, US Treasury Secretary Janet Yellen said.

Yellen told reporters on the sidelines of the G20 summit in Bali that the sanctions would target 14 individuals and 28 entities, including financial intermediaries, but she declined to give details on where they were. Read on

Russia has managed to purchase drones from Iran that are used to attack cities and energy infrastructure in Ukraine.

On Sunday, the artillery exchange that echoed over Kherson failed to dissuade crowds of jubilant, flag-waving residents braving the cold from gathering in the city’s main square.

“We’re happy now, but we’re all afraid of the bombardment from the left bank,” said Yana Smirnova, 35, a singer, referring to Russian guns on the east side of the Dnipro River, which runs through the city.

[1/17] A local resident hugs a Ukrainian soldier after Russia’s retreat from Kherson in central Kherson, Ukraine, on November 13, 2022. REUTERS/Valentyn Ogirenko

The Southern Command of the Armed Forces of Ukraine said on Monday that Russian forces continued “to inflict fire damage on our forces and damage occupied settlements on the right bank of the Dnipro.”

The governor of Kherson region, Yaroslav Yanushevich, said authorities had decided to maintain a curfew from 5pm to 8am and ban people from leaving or entering the city as a security measure.

“The enemy dug up all the critical infrastructure,” Yanushevich told Ukrainian TV. “We are trying to meet in a few days and (then) open the city,” he said.

In an online post, Yanushevich warned people about reports of humanitarian aid arriving in Kherson’s Freedom Square and urged people to move to the city center as demining operations were about to begin there.

Zelensky warned the residents of Kherson about the presence of Russian mines. “I request you please do not forget that the situation in Kherson region is extremely dangerous,” he said.

Residents said the Russians had been pulling out gradually over the past two weeks, but their final departure only became apparent when the first Ukrainian troops entered Kherson on Thursday.

“It was a gradual thing,” said Alexey Sandakov, 44, a videographer. “First their special police went. Then the general police and their administration. Then you started seeing less soldiers in supermarkets and then their military vehicles running.”

Several residents interviewed by Reuters said they tried to minimize their contact with Russians and knew of people who were arrested and mistreated for showing any expression of Ukrainian patriotism.

Sandkov said Russian forces had looted the homes of Ukrainian soldiers who left the city before being captured and examined the bodies of youths passing through checkpoints for tattoos of Ukrainian nationalist groups.

Russia has denied abuses against civilians or attacks on civilians since the start of the war.

Ukraine’s Defense Ministry said it had recaptured 179 settlements and 4,500 square kilometers (1,700 square miles) along the Dnipro River since the start of the week.

The general staff of the Ukrainian Armed Forces said intense fighting was continuing on the eastern front in the Donetsk and Luhansk regions. In the past 24 hours, there have been missile and artillery attacks in Sumy, Kharkiv, Zaporizhia, Luhansk and Donetsk, Zelensky said.

“The battles in the Donetsk region are as intense as in previous days,” Zelensky said.