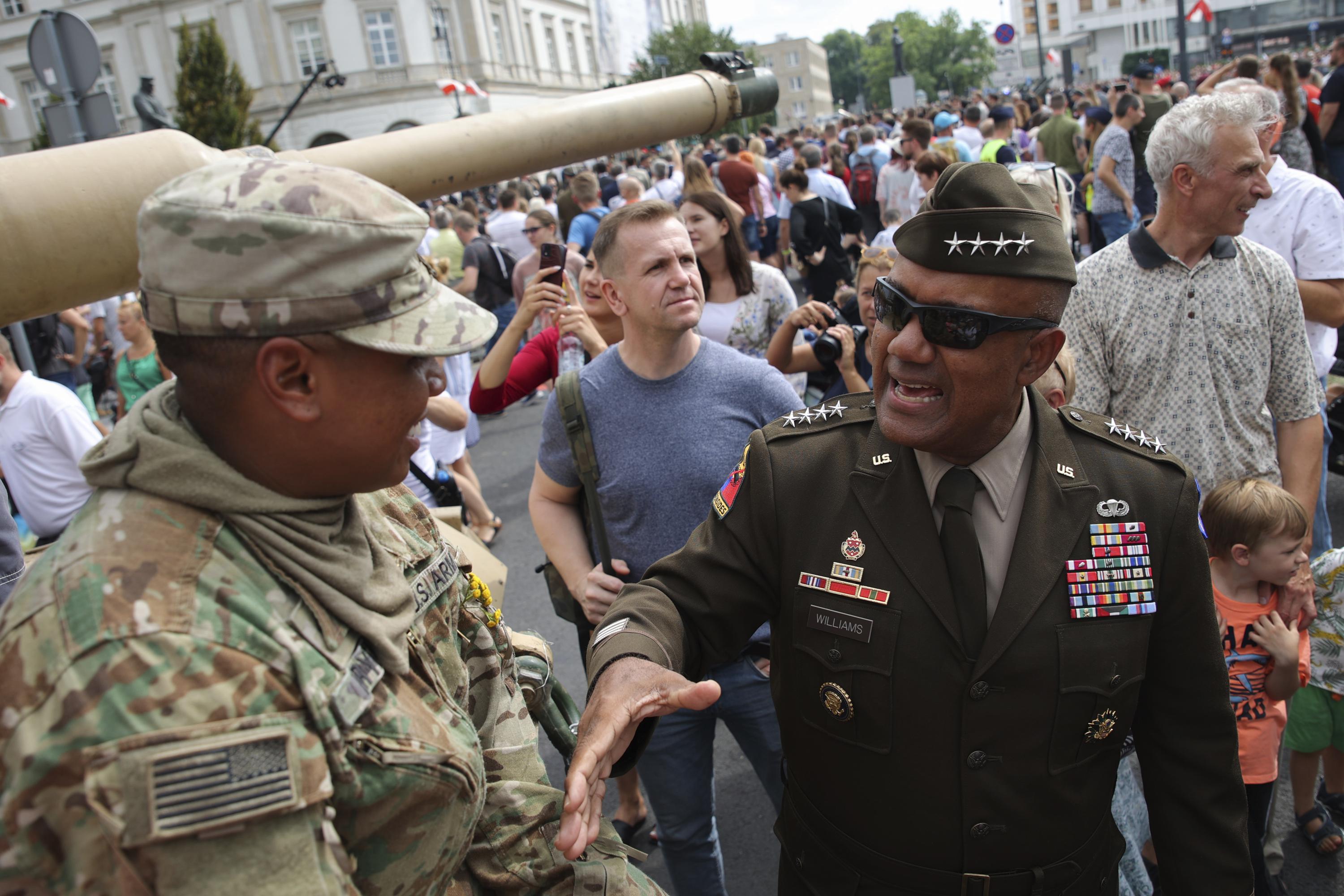 WARSAW, Poland (AP) — The Polish president and other officials marked their country’s Armed Forces Day holiday Monday with U.S. Army commanders and regular U.S. troops in Europe, a symbolic show of support for NATO members on the Eastern Front as Russia nears war. in Ukraine.

Gen. Daryl Williams, the new commanding general of United States Army Europe and Africa, attends a ceremony in front of the Tomb of the Unknown Soldier in downtown Warsaw.

Nearby Polish children boarded US and other NATO tanks, smilingly helping American, British and Romanian soldiers.

Despite the celebratory atmosphere, Williams told The Associated Press that the US presence was meant to convey a message of “strength and resilience”.

“It’s about deterrence, being strong, NATO is strong, the Polish people are strong and we stand shoulder to shoulder with them,” he said.

The holiday commemorates Poland’s victory over Soviet Russia at the Battle of Warsaw in 1920, which halted the westward advance of Bolshevik forces.

President Andrzej Duda recalled in a speech how Soviet commanders at the time were certain of victory, drawing clear parallels to Russian assumptions when they launched full-scale war on Ukraine on February 24.

“For 74 years of her existence, Soviet Russia lost only one official war, and that was 102 years ago,” he said.

Duda accused Russia of violating a prohibition in place since World War II that states nations do not attack sovereign nations in an attempt to seize their territory or independence.

Among those attending the ceremonies was 94-year-old Zbigniew Kruszewski, a veteran of the 1944 Warsaw Uprising against Nazi German occupation. At that time, Soviet troops stood by as the Germans slaughtered the Poles.

“We didn’t get help, we were abandoned,” Kruszewski, who now lives in Texas, told the AP, adding that he hoped the US military presence meant Poland would not be abandoned again.

Polish Defense Minister Mariusz Blaszczak told reporters before the ceremony: “Years have passed, but one thing remains constant – when Russia tries to rebuild its empire, it is always an evil empire. They always commit war crimes.

Polish troops from different branches of the armed forces took to the streets flying the white-and-red national Polish flag, and Duda encouraged the new generals.

With a new sense of danger posed by Russia’s invasion of Ukraine, the military organized the trip to recruit volunteers for the armed forces.

The US military has previously participated in the August 15 celebrations but this is the first since President Joe Biden made the announcement. Poland had long since discovered — at a NATO summit in late June — that Washington was establishing its first permanent US military presence in Poland.

Poznan, newly renamed Camp Kosciusko in western Poland, is a shared Polish-US base in Poland that becomes the permanent headquarters in Poland for the US Army’s V Corps and the easternmost US Army base in Europe. Many US troops there, however, are serving on a rotational basis.

The base is named after General Tadeusz Kosciuszko, a hero of the American Revolution, who fortified West Point and who later returned to Poland to fight the Imperial Russian Army.

Maj. Kevin Anderson, a US Army public affairs officer, said the military is having trouble pronouncing the name Kosciuszko (pronounced roughly koh-shush’-koh) and many people are referring to it as “Camp K.”

He said the military created a video to help soldiers learn to say it to respect Poland as it welcomes Americans.

“Right now it’s pretty much Camp K, but we’re really trying to convince the Soldiers to pronounce the whole Camp Kosciusko,” he said.