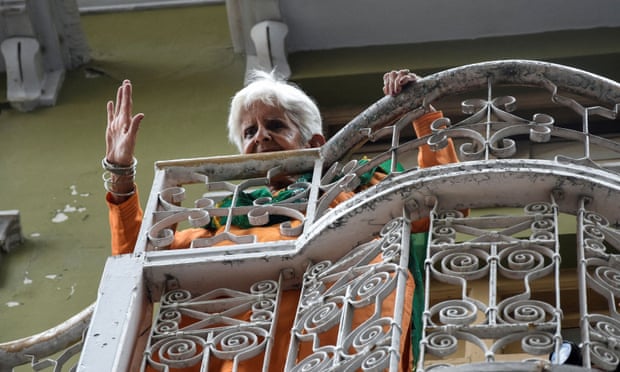 FOr decades later, Reena Verma would return to her home in Rawalpindi in her dreams. She would enter the three-story house through narrow lanes and walk through the rooms where she lived with her five siblings, parents and aunt for the first 15 years of her life.

But for 75 years, it was home to a seemingly impenetrable national border, one Verma can only visit as a painful memory. It was till July this year. Now 90 but still spry, a chance encounter on a Facebook group helped her find and visit the home the family was forced to abandon 75 years ago, where it is now. Pakistan.

“I thought, ‘This is the reason I’m still alive, so I can finally come back home’,” Verma said of her emotional and joyous return. After all these years, there is no one left in the alley that Verma knew from her childhood, but the locals enthusiastically welcome her as their own.

In 1947, Verma’s family’s peaceful life came to an abrupt end with Partition, which divided the subcontinent along communal lines. Rawalpindi, the bustling city in Punjab where they lived as a Hindu family, was one of the cities that ended up in the newly formed Islamic Republic of Pakistan after August 1947. The state of Punjab became the epicenter of horrific violence and Rawalpindi, which had a majority Muslim population, suffered brutal sectarian killings as Hindus and Sikhs were driven from their homes and fled to the border. India.

Growing up, Verma remembers a peaceful existence between her Hindu family and their Muslim and Sikh neighbors, who would often visit their home for cups of tea and to celebrate festivals.

But by March 1947, Varna remembered the fear in the minds of the Hindus living in the area. Neighbors patrolled their streets and raised alarms in case of Muslim raiders at night. Finally, in May 1947, Verma’s parents decided to send their children to Shimla, a city in the foothills of the Himalayas, where they would go on holiday. Just 15 at the time, Verma packed only a few things, assuming she would be back in a few weeks. Soon her parents followed. Little did they know that they would never see their home again.

After 1947, it became clear that a return to Rawalpindi was unthinkable. “My parents had left everything behind and were suffering a lot,” she said. “My parents had been thinking for years that we would go back.”

Stranded without a home, leaving behind all their possessions and money, Verma’s family eventually moved to Pune in Maharashtra. As the years passed, she longed for her home and often thought of finding her way back. But with no contact in Rawalpindi, and no way of knowing if her house was still standing, she set out on the journey of her life. She married and had two children, but still “felt like something was missing”.

But Verma’s life was about to change after he joined a Facebook group called the India-Pakistan Heritage Club. She wrote a speculative post about her old house in Rawalpindi, detailing its location and nearby landmarks, asking if anyone could help track it down. Another member from Rawalpindi took up the task and sent her a message: He had found her old house, which was miraculously still standing.

Two applications were rejected before Verma’s case reached the ears of Pakistan’s foreign minister and she was granted a visa. In July, she crossed the border for the first time in 75 years.

Varma was unprepared for the fanfare that greeted her arrival. Drums and singing accompanied her as she passed through her old alley, and dozens of residents flocked to welcome her and hugged her tightly. “I have no words to express how it felt,” she said. “Everything went very smoothly and when I got there I got a very warm welcome. And I couldn’t believe the house was in such perfect condition.”

She added: “People talk about India and Pakistan as divided, but when you go there, you get a lot of respect and hospitality. You will never forget their hospitality.

Now the family living in the house spent the night with her. However, there is a sadness as she walks through the rooms and stands on the balcony. “I was missing my family a lot. I think it’s there too.

It was an emotional trip for Imran Williams, who set up the India-Pakistan Heritage Club Facebook page and welcomed Verma on his arrival in Rawalpindi.

Verma said she hoped her trip would serve as an example for the governments of India and Pakistan to set aside their political differences and allow others to travel across the border.