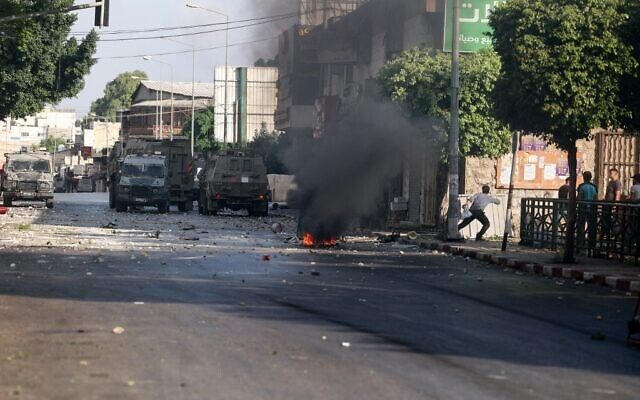 A wanted member of a terror cell that had managed to evade previous attempts to capture him was among three people killed in a fierce gun battle with Israeli forces in Nablus on Tuesday morning. It is reported that 40 more people were injured.

According to the Israel Defense Forces, the soldiers surrounded the house of Al-Aqsa Martyrs Brigades commander Ibrahim Nablusi, which led to the shooting.

The IDF, Border Police and the Shin Bet Security Agency issued statements saying Nablusi was killed there along with another terrorist.

Israeli forces fired shoulder-fired missiles at the building where Nablusi was hiding, the IDF said. After scanning the house and confirming that Nablusi had been killed, the army found a large amount of explosive devices and other weapons, the Shin Bet said.

According to the Palestinian Authority’s Ministry of Health, three Palestinians were killed and 40 wounded, with at least four others in critical condition. The ministry identified the deceased as Nablusi, Islam Subuh and Hasin Jamal Taha.

In a statement, Palestinian Islamic Jihad called Nablusi a “commander” and Subuh and Taha “mujahideen”. The terrorist group has not claimed him as a member.

Israeli officials said no troops were injured during the operation, but a The border police dog, Jilly, Killed in firing by the fugitives.

Palestinians exchanged fire with Israeli forces in the Old City of Nablus, where the army tried to capture Nablusi.

Pictures | There are signs of destruction in the old city of Nablus where resistance fighters clashed with special forces this morning. pic.twitter.com/qsjZdZeYTE

Clashes also erupted in other parts of Nablus as Palestinians threw explosive devices and stones at troops, according to the IDF. The IDF said the soldiers responded with “riot dispersal devices” and live fire, killing several Palestinians.

Heavy gunfire could be heard from the ongoing clashes, as dozens of Israeli military vehicles brought traffic to a standstill in one of the West Bank’s largest cities.

Palestinians clash with Israeli forces in the West Bank city of Nablus on August 9, 2022. (Jafar Ashtiyah/AFP)

According to Shin Bet, Nablussi was part of a squad that carried out several shooting attacks on soldiers and civilians in the West Bank earlier this year. The IDF said the attack included gunfire at Joseph’s Tomb complex on the outskirts of Nablus.

Prime Minister Yair Lapid said he “appreciates the security forces in the region who dedicate their lives to the safety of Israel’s citizens.”

“The elimination of terrorist Ibrahim Nablusi is another step in our relentless fight against terrorism. I welcome the concerted action of the security organizations,” Lapid said in a statement released by his office.

“The Shin Bet once again proved its intelligence superiority against terrorist organizations. I would like to thank the men and women of Shin Bet who took part in the operation, for their courage, creativity and determination to reach and attack the terrorists who mistakenly thought they were harboring them,” said Lapid. 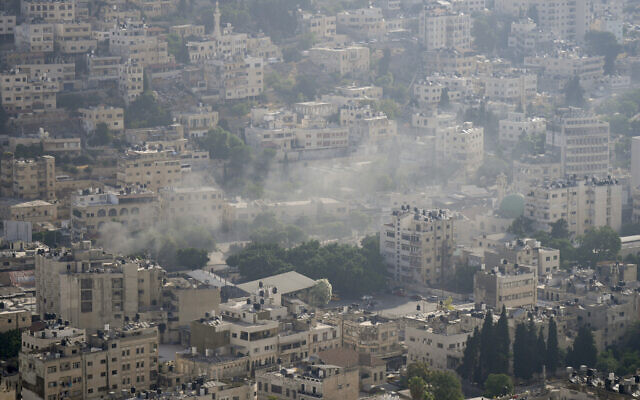 Smoke rises from buildings during an Israeli military operation in the West Bank city of Nablus on August 9, 2022. (AP Photo/Majdi Mohammed)

“Zili was part of the unit, beloved and professional,” Lapid said of the dog of the elite police Yamam counter-terrorism unit. The unit will miss him, the dog handlers and the combatants he frequently accompanied on operational activities.” 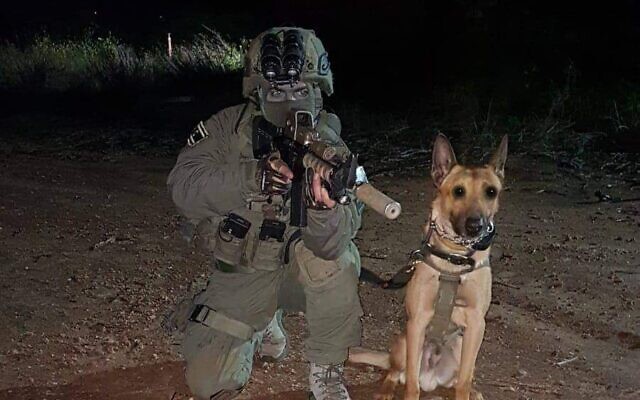 9-year-old Jilly, a dog belonging to the Yamam counter-terrorism police unit, in an unidentified photo. Jili was killed in a raid in Nablus on 9 August 2022. (Israel Police)

Defense Minister Benny Gantz also welcomed Tuesday’s move, saying Israel “will continue to act in a focused and powerful manner against terrorism in all areas and against anyone who threatens Israeli citizens.”

“Anyone who threatens – will not live,” Gantz said on Twitter.

In February, Israeli forces killed three members of the Al-Aqsa Martyrs Brigade cell in Nablus. While Nablusi was initially believed to have been killed during that operation, he attended the funeral of his fellow cell members.

Palestinian media have hailed Nablusi as a hero for repeatedly managing to escape Israeli arrest, although Israeli officials have said he was not always the target of arrest operations in Nablus.

The Al-Aqsa Martyrs Brigades is an alliance of armed groups affiliated with the ruling Fatah party of the Palestinian Authority. The terrorist group has carried out joint attacks with Palestinian Islamic Jihad in the West Bank.

The operation came less than 48 hours after Israel and the PIJ reached a ceasefire after three days of armed conflict in and around the Gaza Strip.

On Monday, the terror group warned it could resume fighting unless Israel agreed to release two of its members.

The Egyptian-brokered deal, which took effect at 11:30 p.m. Sunday, ended a three-day standoff that began Friday with Israeli strikes that killed a PIJ commander. Palestinian militants then fired about 1,100 rockets into Israeli territory, while Israel Defense Forces attacked Islamic Jihad targets and killed one of the Iran-backed group’s top leaders in Gaza.

The three-day standoff began after the IDF arrested Islamic Jihad’s West Bank chief Bassam Saadi in a raid on Jenin last week and the militant group threatened to carry out terrorist attacks in retaliation.

Tensions remain high in the West Bank, as Israeli security forces step up arrest raids and operations following a deadly wave of terror attacks on Israelis that killed 19 people earlier this year.

Times of Israel staff and agencies contributed to this report.