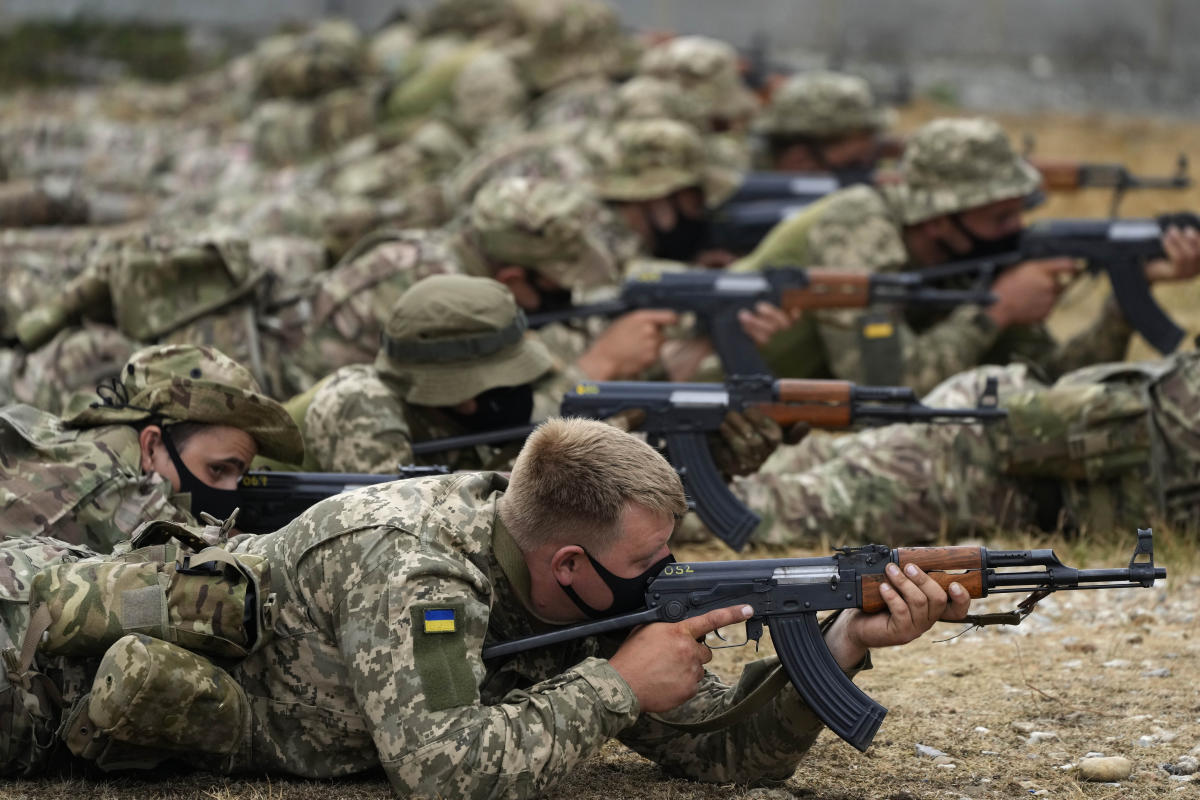 BRITISH ARMY BASE, England (AP) – A few weeks ago, Serhi was a business analyst at an IT company. Jakhar was a civil engineer. Now they are soldiers, training to liberate Ukraine from a Russian invasion — but doing so more than 1,000 miles (1,600 kilometers) away in Britain.

They are among hundreds of Ukrainian recruits put through an intense form of infantry training at an army base in southeast England. A contingent of 10,000 Ukrainian soldiers promised to be trained by the British military within 120 days, they are spending weeks learning skills including marksmanship, battlefield first aid and – crucial to their country’s future – urban warfare.

As British soldiers train for operations in Northern Ireland on a mock-townscape practicing clearing Ukrainian houses amid gunfire and smoke grenades, they plan to drive Russian troops off the streets of their cities.

“The most important part is urban training, because it’s the most dangerous battle in cities,” said Serhiy, who like other Ukrainians did not want to use his full name for security reasons. “British trainers have a lot of experience in Iraq, Afghanistan. We can adapt all this knowledge to the Ukrainian situation and use it to free our country from Russian aggression.”

British trainers are training Ukrainian troops through a condensed version of British Army infantry training, covering weapons handling, first aid, patrol tactics and the law of conflict. The aim is to turn raw recruits into combat-ready soldiers in a matter of weeks. The first batch arrived last month and has already been sent back to replace depleted Ukrainian units.

“We’re running a basic infantry course, where Ukrainian recruits are recruited and taught to shoot well, to move and communicate well in any tactical environment, and to medicate well,” said Major Craig Hutton, a Scots Guards officer who helps supervise. . Training

Hutton says many Ukrainian soldiers have little military experience but “are very motivated. They have an incredible will to learn and all they want to do is practice, practice and more practice.”

More than 1,000 UK personnel are involved in the training mission, which takes place at four bases around the UK, with other countries also sending trainers, including Canada, the Netherlands, New Zealand and the Nordic nations.

Britain is sending Ukrainians home with new uniforms, body armor, helmets and other gear, part of a 2.3 billion pound ($2.8 billion) worth of UK military aid to the country that also includes anti-tank missiles and sophisticated rocket-launch systems.

Zakhar, a former engineer, said it was difficult to stay away from Ukraine because of the ongoing conflict in the Donbass region in the east and in the south.

“I left my parents. I left my brothers and sisters, my relatives, to gain knowledge and experience that will help me … free our territory from traders and invaders,” he said through an interpreter.

Serhi, a one-time IT employee, has been in uniform for less than a month and is just as determined.

“I know that Ukrainian soldiers are dying to protect our homes right now. So it’s hard to know that I’m not with them,” he said. “But the Ukrainian army needs only professional soldiers, so I am ready to train as hard as possible to be ready for the next battle.”

Brigadier Justin Stenhouse, who is in charge of the training as commander of the 11th Security Support Brigade, said it was “humbling” to see the motivation of the Ukrainians.

But he admitted that preparing for the chaos of urban combat is “almost impossible to do in training.” The goal of the mission, he said, “is to train them so they can adapt to survive those early weeks of combat.”

“They will learn more in the first week of fighting than we can give them here,” he said.