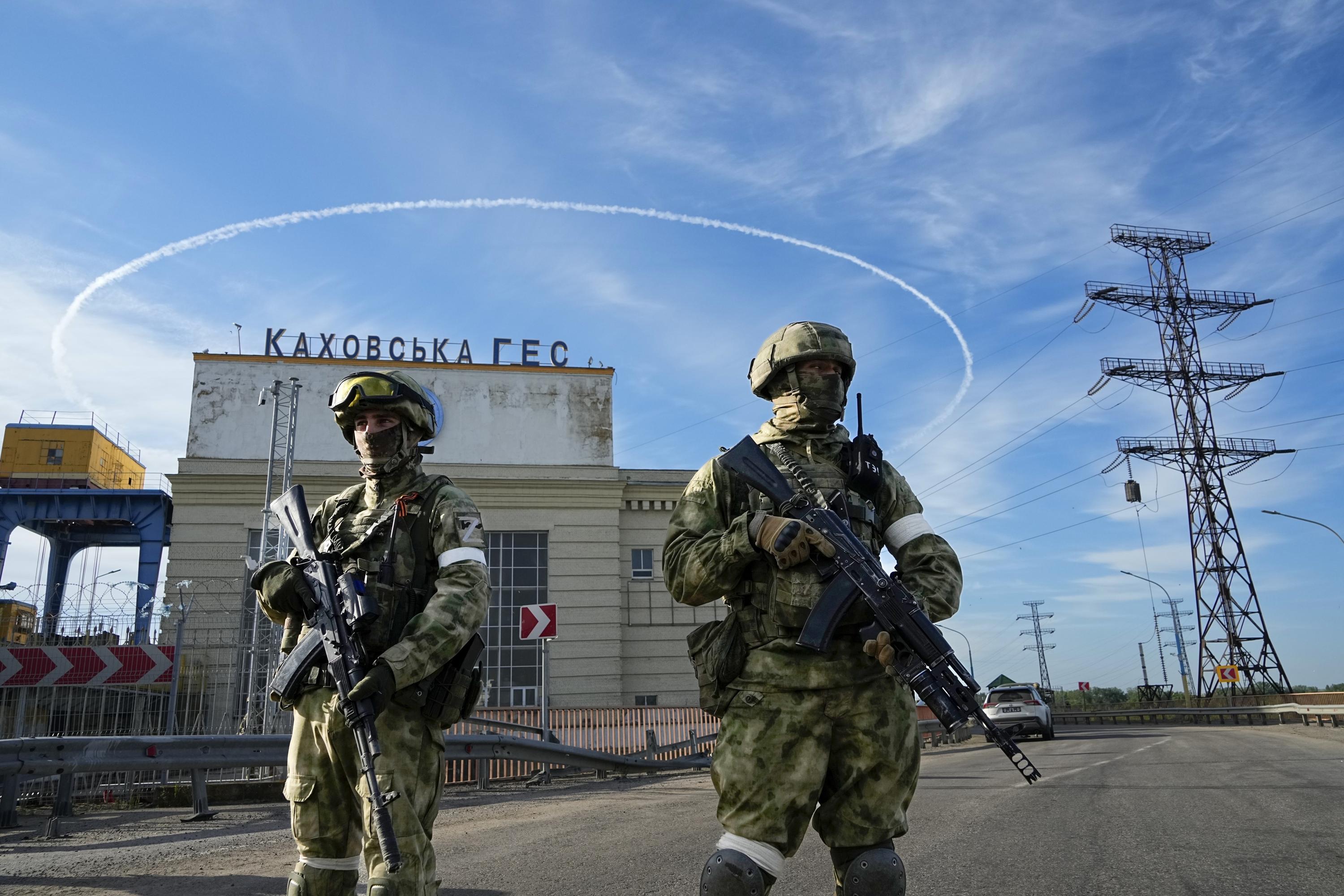 Widespread resistance has eroded the Kremlin’s control over the area and threatened plans to hold referendums in various cities on the move toward annexation. by Russia.

“Our goal is to make life unbearable for the Russian occupiers and use any means to thwart their plans,” said Andriy, a 32-year-old coordinator of the guerrilla movement in southern Kherson region.

A member of the Zovta Strychka — or “Yellow Ribbon” — resistance group, Andrey spoke to The Associated Press on condition of anonymity to avoid being traced to Russians. The group takes its name from one of Ukraine’s two national colors, and its members use ribbons of that color to mark potential targets for guerrilla attacks.

Ukraine’s military recently used US-supplied multiple rocket launchers, known as HIMARS Hitting a strategic bridge over the Dnieper River in Kherson, cutting off the Russians’ main supply link. The city of 500,000 people, captured by Russian forces at the start of the war, has been flooded with resistance leaflets threatening Moscow-backed authorities.

Before the attack on the bridge, leaflets appeared, “If HIMARS can’t do it, the Partisans will help.”

“We are providing the Ukrainian army with precise coordination for various targets, and with the help of guerrillas new long-range weapons, especially HIMARS, become even more powerful,” Andriy told the AP. “We’re invisible behind Russian lines and that’s our strength.”

Guerrilla activity has also increased, as Ukrainian forces have stepped up attacks in the region and reclaimed some areas west of the Dnieper River.

They coordinate with the Ukrainian military’s special operations forces, which help them develop strategy and tactics. They also select military targets and set up websites with tips on how to organize resistance, prepare ambushes, and avoid arrest. Arms caches and secret hideouts were created in the occupied areas.

Bombs have also been planted near administrative buildings, in the homes of officials and on their way to work.

A vehicle carrying Yevgeny Sobolev, the head of Kherson prison, went off when an explosive planted in a tree went off, although he escaped the attack. A bomb hit a police vehicle, seriously injuring two officers, one of whom later died. The deputy head of the local administration in Nova Kakhovka died of gunshot wounds over the weekend.

Guerrillas have repeatedly tried to kill Vladimir Saldo, head of the Russia-backed Provisional Administration in Kherson region, offering a 1 million hryvnia (about $25,000) reward. His aide, Pavel Slobodchikov, was shot dead in his vehicle and another officer, Dmitry Savluchenko, was killed by a car bomb.

Thousands of residents staged peaceful protests during the early days of the occupation. But the Russian military quickly dispersed them and arrested activists, radicalizing the resistance.

Alexander Kharchikov, 41, a wedding photographer-turned-activist from Skadovsk, said he was beaten and tortured after being arrested in a Russian security sweep.

“The Russians persecuted me for a long time. They beat me with baseball bats, they pinched my fingers and tortured me with electric shocks,” Kharchikov said in a telephone interview. “I got hurt and broke a rib, but I didn’t give them any information and that saved me.”

Kharchikov spent 155 days in Russian custody until his release.

“Repression is intensifying. They are creating unbearable conditions for the Ukrainian people, making it difficult to survive under Russian occupation,” he told the AP.

The Russians were offering 10,000 rubles ($165) to anyone applying for Russian citizenship to strengthen their grip on the region, he said.

Moscow has introduced the ruble, set up a Russian cellular network and cut off Ukrainian television in the region. Giant screens showing Russian TV broadcasts are installed in the main squares of the cities.

Melitopol Mayor Ivan Fedorov, who spent a long time in Russian captivity, told the AP that about 500 Ukrainian activists were detained, many tortured. Disappeared a few months after the arrest.

In May and June, guerrillas blew up two railway bridges in Melitopol and derailed two Russian military trains, Fedorov said.

“The resistance movement is pursuing three goals – to destroy Russian weapons and their means of supply, to discredit and intimidate the occupiers and their collaborators, and to inform the Ukrainian special services about enemy positions,” he added.

Russia responded by increasing patrols and conducting regular sweeps for suspected guerrilla links. In such raids, they check phones and arrest those with Ukrainian symbols or photos of relatives in military uniforms.

“In a mopping-up operation, the Russians seal off entire neighborhoods, stop traffic, and systematically move from apartment to apartment. If they found Ukrainian symbols or any link with the Ukrainian army, they put all family members in internment camps,” Fedorov said.

“At best, people are told: ‘If you are against Russia, get out of here’, but it also happens that some people disappear,” he said.

Pro-Moscow officials are preparing for a possible referendum on Melitopol and other occupied territories that would join Russia, conducting security raids and handing out Russian passports.Fedorov said.

“We will derail the Russian referendum. We will not allow the vote to be held under the barrel of a Russian gun,” he said, adding that more than 10% of the population did not sympathize with Moscow and half had fled.

Guerrillas have tied yellow tape to buildings where voting will take place, warning residents that they may be targeted with bombs during voting.

Opposition ranges from radical activists to teachers and retirees who sing Ukrainian songs in parks and secretly wear yellow and blue ribbons.

“The Russians expected that they would find flowers, but they were faced with the fact that most people consider themselves Ukrainians and are ready to resist in various forms – from gathering information to burning and blowing up the occupiers,” said Oleksiy Alexandrov, who has There was a restaurant in the southern port of Mariupol.

In recent gestures of defiance in Mariupol, a young man wrapped in a Ukrainian flag stood in the street next to a theater destroyed by a Russian bomb. The photo spread across Ukrainian media and President Volodymyr Zelenskyy welcomed him in an address to the nation.

“It was a very brave thing to do and I want to thank him for his actions,” Zelensky said. “This man is one of many people who are waiting for the return of Ukraine and will not accept this occupation under any circumstances.”

While pro-Moscow sentiment is strong in Donbas, Ukraine’s predominantly Russian-speaking industrial heartland, a guerrilla movement has also emerged there.

Luhansk Governor Serhiy Haidai said six Russian soldiers were injured last month when their vehicle was blown up by guerrillas in the city of Sivierodonetsk. They have also targeted railways, disrupting Russian munitions transport and other supplies.

“The guerrillas have worked successfully,” Haidai told the AP. “They didn’t just hand out leaflets. They have also destroyed infrastructure. This helps a lot in slowing Russian attacks and advances.

Observers say the guerrilla movement varies from region to region and it is in the interest of both sides to exaggerate its scope.

“The Russians do this to justify their repression of the occupied territories, while the Ukrainians try to demoralize the Russian military and glorify their victory,” said Vadim Karasev, head of the Kyiv-based Institute of Global Strategies think tank. “Stories about Ukrainians feeding poisoned cakes to Russian soldiers are hard to believe, but sometimes legends work better than facts.”