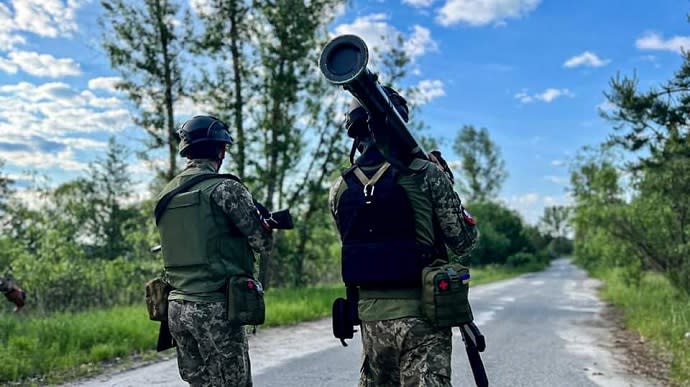 The Russian army attempted to launch an offensive operation on the Zeleny High – Novohryhorivka axis (on the Pivdenny Buh front), but the Ukrainian armed forces inflicted losses on the Russian forces and forced them to retreat.

source: On the General Staff of the Armed Forces of Ukraine FacebookInformation up to 06:00 on August 16

Details: No significant changes have occurred on Volyn and Policia front. The General Staff of the Belarusian Armed Forces conducts a communication exercise. There is a threat of missile and air strikes from the territory of the Republic of Belarus.

above In front of Sivershchyna, Russia continues to deploy its troops in Bryansk and Kursk Oblasts (in Russia) near the Russian-Ukrainian border to deter Ukrainian forces. The Russians shelled areas around the Ukrainian villages of Kamianska Sloboda in Chernihiv Oblast and Khodi in Sumy Oblast.

above In front of Sloviansk, the Russians shelled areas near Hryshuvakha and Virnopilia. Russian units are working to improve their supply and logistics on this front.

above In front of KramtorskThe Russian army used various types of artillery to shell areas in the vicinity of Kramtorsk, Spirne and Ivano-Darivka.

They are attacking the Lysichensk oil refinery – Ivano-Darivka axis, where fighting is currently underway.

above In front of BakhmutThe Russians used tank guns, as well as tubed and rocket artillery, to shell the areas around Bakhmut, Bakhmutske, Soledar, Shumi, Bilohorivka, Kostiantynivka, Yakovlivka, and Zaitseve.

Russian units carried out offensive and offensive operations on the Volodymyrivka – Bakhmutske and Striapivka – Soledar axes; Ukrainian armed forces have pushed back the Russians on both sides. However, fighting continued on the Pokrovske – Bakhmutske and Horlivka – Zalizne axes.

above In front of Avdivka, Russian forces shelled areas around Krasnohorivka, Spartak, and Nevelske using tubed and rocket artillery. They are conducting an assault on the Staromykhailivka – Nevelske axis; There is a battle going on.

Russian occupying forces have been carrying out offensive and offensive operations along the Solodke – Novomykhailivka axis, where they have had some success. The battle continues.

In addition to tank gun and artillery fire along the entire line of contact above In front of Pivdennyi BuhThe Russians deployed troops and attack aircraft near Bila Krinitsia, Andrivka and Lozov.