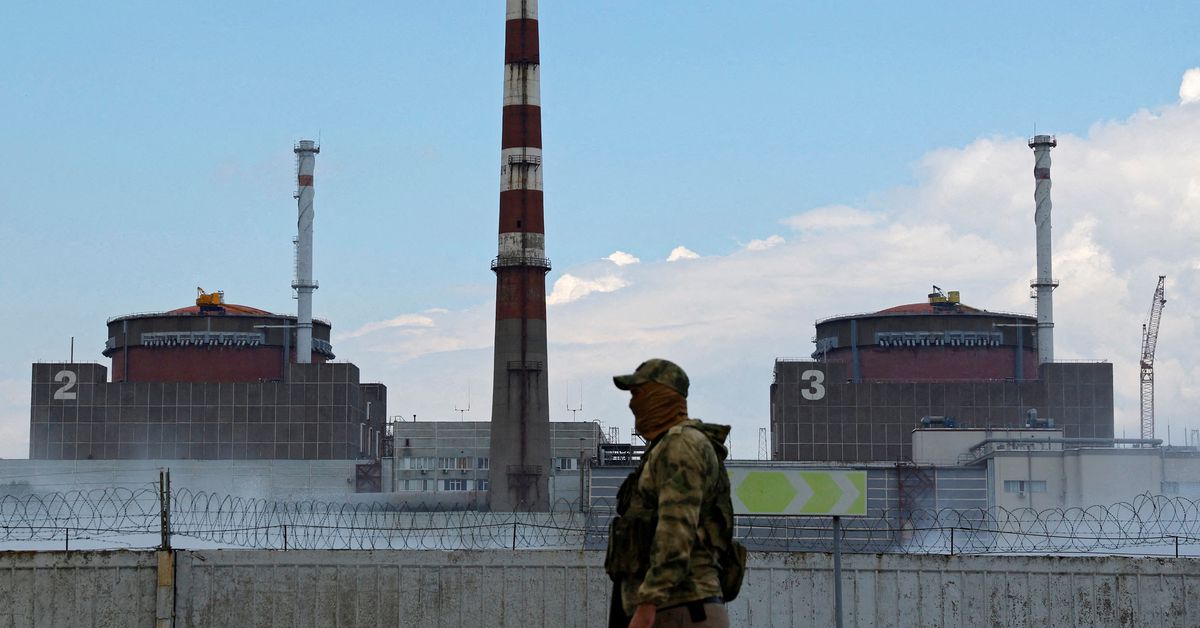 KYIV, Aug 16 (Reuters) – Ukraine has called for new sanctions on Russia, highlighting the dangers and consequences of a disaster at Europe’s biggest nuclear plant, where the latest firefight nearby has reignited a blame game between the two sides.

Ukrainian and Russian-based officials have blamed each other for the attacks near the Zaporizhia nuclear plant in southern Ukraine.

Ukrainian President Volodymyr Zelensky has warned Russian soldiers that they will become “special targets” if they attack the site in the now Russian-controlled city of Enrhodar or use it as a base for shelling.

“If Russia’s actions cause a disaster, the consequences could be for those who are silent at the moment,” he said in a speech late Monday night, calling for new sanctions on Russia’s nuclear sector.

“Now if the world does not show strength and determination to protect a nuclear power plant, it means the world is lost.”

The global nuclear watchdog has warned of disaster if the fighting does not stop.

Vladimir Rogov, a Russian-installed official in Enrhodar, said on Monday that about 25 heavy artillery strikes from US-made M777 howitzers took place near the nuclear plant and a residential area over a two-hour period.

But according to the head of the administration of Nikopol district, which is across the river from Enrhodar and remains under Ukrainian control, Russian forces had tried to make it look like Ukraine was attacking the city by shelling it.

“The Russians think they can force the world to comply with their terms by firing up the Zaporizhia NPP (nuclear power plant),” Ukrainian presidential chief of staff Andriy Yermak wrote on Twitter.

According to a report from the Southern District of the Ukrainian Armed Forces on Facebook, Russian forces continued to fire on towns and cities – Velika Kostruumka and Marhanets in the south – in front of the Zaporizhia nuclear power plant.

Reuters could not immediately verify the battlefield reports.

The United Nations has said it has the logistical and security capabilities to support a visit by the International Atomic Energy Agency (IAEA) if both Russia and Ukraine agree. Read on

“In close cooperation with the agency and its leadership, we will do everything necessary to allow IAEA experts to remain on station and conduct a true assessment of sabotage actions on the Ukrainian side,” Russian Foreign Ministry spokeswoman Maria Zakharova said.

But Igor Vishnevetsky, deputy head of the Foreign Ministry’s Department of Nuclear Proliferation and Arms Control, was later quoted as saying it was too dangerous for an IAEA mission to inspect the plant from the capital, Kiev. Read on

“Imagine what it means to pass through Kiev – it means they reach the nuclear plant from the front line,” RIA news agency quoted Vishnvetsky as saying.

Ukraine, where parliament on Monday extended martial law for another three months, has said for weeks it is planning a counteroffensive to seize Zaporizhia and neighboring Kherson province, the largest swath of territory seized by Russia since its February 24 invasion and still under control.

The conflict, which has displaced millions and killed thousands, has strained relations between Moscow and the West.

Russia said late on Monday that a British spy plane violated its airspace over Finland’s eastern peninsula between the Barents Sea and the White Sea, and a fighter jet ejected the British planes from Russian airspace.

Britain’s Ministry of Defense did not immediately respond to a request for comment.

Russia has called its invasion of Ukraine a “special military operation” to destroy its neighbor’s forces and protect Russian-speaking communities. Ukraine and Western supporters accused Moscow of launching an imperial-style war of conquest.

The Ukrainian military said on Monday evening that Russian forces had opened fire to advance on various frontline positions in the east and south.

Despite the biggest attack on a European state since 1945, progress was made on a grain agreement to ease the world food crisis caused by the conflict, the most significant diplomatic breakthrough since the war began.

A joint coordination center set up by the United Nations, Russia, Ukraine and Turkey said it had approved the departure of the Brave Commander, the first humanitarian food aid cargo bound for Africa from Ukraine since the invasion. Will leave on Tuesday.