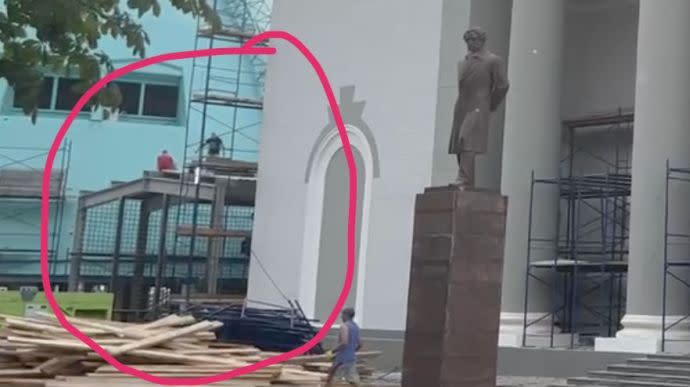 Ukrainian authorities are calling on world leaders and international organizations to stop the illegal trial of Ukrainian defenders in Mariupol and visiting prisoners in Olenivka, while the occupiers prepare the Mariupol Philharmonic for their fake “trial”.

source: Joint Statement Security and defense forces about the captured defenders of Mariupol

Quote: “We appeal to the entire civilized world not to allow the trial of the Ukrainian defenders declared by the executioners in Mariupol.

We demand that representatives of the United Nations and the International Committee of the Red Cross be immediately sent to the places where Ukrainian prisoners of war are held, primarily Olenivka.”

Details: Ukraine’s security and defense forces say the surrender was the only way to save defenders at the Azovstal iron and steel works in May.

“The operation to save the 2,500 defenders of Mariupol was the only possible option to save the lives of our heroes. There was no option to evacuate. There was only one option: an operation for rescue or death at Azovstal, mainly the seriously wounded, because the supply of essential drugs was running out,” the statement said.

Those seriously injured during the exchange in June were the first to be rescued: 144 people, 95 of whom were Mariupol guards, have already returned. Most of them are seriously injured. So far, they have received the necessary medical care and rehabilitation.

“All state agencies are working for the return of the heroes of Mariupol and all Ukrainians who have been captured by the enemy. The coordination headquarters for the treatment of prisoners of war is working 24/7 to free Ukrainian defenders from captivity and search for missing persons under special circumstances,” Security And called the defense force.

Meanwhile, “the Russian Federation does not comply with its obligations, ignores agreements and fails to recognize international norms and the rules of war.”

Therefore, the issue of prisoner exchange is complex and sensitive.

According to Petro Andryushchenko, adviser to the mayor of Mariupol, the occupiers are preparing for the trial of the city guards on August 24 and hastily converting the Chamber Philharmonic Hall into a prison.

“Apart from the cages, a special bunker/garage is being built to receive the trucks carrying our captured heroes. This building did not exist before the war, it is being built for one purpose only – the “Tribunal”. The building will be connected with the cages and cells through a special corridor,” Andryushchenko writes, adding photos and videos.