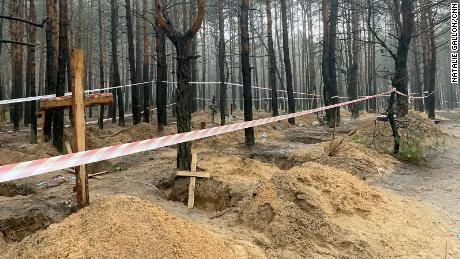 Ukraine’s defense ministry said at least 440 “unmarked” graves had been found in the city in recent days. President of the country Volodymyr Zelensky said on Friday that some of the bodies found in Isium showed “signs of torture” and blamed Russia for “brutality and terrorism”.

Izium was subject to intense Russian artillery attacks in April. The city, located near the border of Kharkiv and Donetsk regions, became an important center for the invading forces during the five-month occupation. Ukrainian forces took control of the city on Saturday in a strategic blow to Russia’s military offensive in the east.

When CNN arrived at the mass burial site Friday afternoon, officials were moving body bags into a refrigerated truck, which appeared to contain one very small object.

Most of the graves at the burial site are individual graves, with wooden crosses placed on top of earthen mounds. Some have names and numbers written on them. The number of one was 398. Another was named as an 82-year-old man. An official at the site told CNN that the investigation will determine when the men died.

Further down in the forest is a former military position, with tanks dug deep into the ground.

A policeman at the scene told CNN that the scene was a mass grave where 17 bodies were found.

“Civilian organizations and military people are ahead here,” Igor Garmash, an investigator at the scene, said of the specific part of the site they were investigating, pointing to a nearby location.

“More than 20 bodies have been examined and sent for further investigation,” he told CNN.

Ukraine’s Center for Strategic Communications said on Thursday that some of the graves found at Izium were “fresh” and that the bodies buried there were “mostly civilians”.

He said local people told investigators the family had died in a Russian airstrike.

“Also we saw mass burials of Ukrainian army soldiers here. The way they were buried – you can see evidence that their hands were tied, they were killed at close range,” Lubinets said.

An Izium resident who lives across the street from the mass burial site told CNN that the Russians first airstrike a cemetery in a nearby town and then moved in.

“They brought their special machines. They dug some ditches for their vehicles. We just heard how they were destroying the forest,” Nadezhda Kalinichenko told CNN.

She said she tried not to go out when the city was under Russian control because she was too scared.

“After they left, I don’t know if there was a fight. One night a week ago we heard a lot of heavy trucks,” she said.

Zelensky said in his speech on Thursday that Russia should be held responsible for the deaths there and in other cities where large numbers of bodies have been found.

“bushing, Mariupol And now, unfortunately, Izium… Russia leaves death everywhere. And must be responsible for it. The world should hold Russia responsible for this war. We will do everything for this,” he added.

Oleh Sinehubov, the governor of Kharkiv region, said, “The scale of the crimes committed by the invaders in Izium is enormous. This is bloody brutal terror.”

Sinihubov said, “450 bodies of civilians with signs of violent death and torture were buried in the forest belt. It is hard to imagine this in the 21st century, but now it is a sad reality in Isium.”

“There are several bodies with their hands tied behind their backs and one person has been buried with a rope tied around his neck. These people were obviously tortured and hanged. Among those buried are children,” he said.

Meanwhile, Oleh Kotenko, Ukraine’s Commissioner for Missing Persons, said in a Telegram post that the search operation for the remains of the “fallen hero” was continuing cautiously across the region.

“The biggest problem is that some areas are still being excavated. Despite this, we are working, because we have to return home to every hero so that families can honor the memory of soldiers who died for Ukraine. Possible,” said Kotenko.

Zelensky visited Izeum on Wednesday and told reporters he was “shocked” by the number of “destroyed buildings” and “killed people” due to the Russian occupation.

In his speech Friday night, Zelenskiy said the exhumation of bodies at the mass grave was continuing and “it is too early to talk about the total number of people buried there.”

He added that investigations were ongoing in all areas of the country that had been retaken by the Russian army and that many civilians, including foreigners, who had been held captive in the occupied towns and cities were found alive.

He said seven students from Sri Lanka were among the rescued foreigners. He was studying at the Kupyansk Medical College but was captured by Russian soldiers in March and put in a basement. “Only now, after the liberation of Kharkiv region, these people have been rescued and are being provided with proper medical care,” Zelensky said.

A United Nations source has told CNN that a team from the UN’s human rights monitoring agency – OCHR – will go to Izium and the surrounding area as soon as possible.

The war crimes investigation team may then follow up, the source said. Their specific destination is currently unclear.

Moscow was using Izium as a rail hub for attacks and resupplying its forces in Donetsk region and Kupyansk, about 48 kilometers (30 mi) south of Izium.

Zelensky thanked foreign governments for sending investigators and prosecutors to investigate alleged human rights abuses by the occupying forces in Ukraine and that all occupied territories would eventually return.

Ukrainian forces have continued military offensives, especially in the northeastern and southern parts of the country.

Zelensky said on Tuesday that while 8,000 square kilometers (3,088 square miles) of territory had been liberated by Ukrainian forces so far this month, roughly half was still subject to “stabilization” measures.