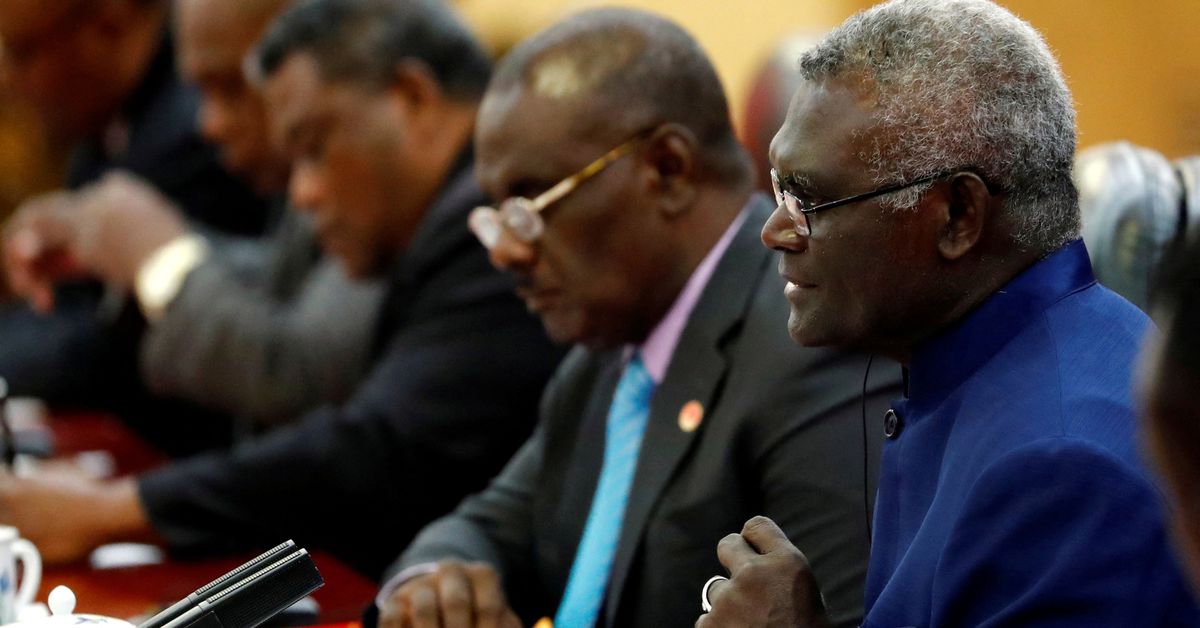 Solomon Islands Prime Minister Manasseh Sogaware attends a meeting with Chinese Premier Li Keqiang (not pictured) at the Great Hall of the People on October 9, 2019 in Beijing, China. REUTERS/Thomas Peter

Solomon Star News reported that Sogaware was scheduled to speak at a memorial service on Sunday attended by US Deputy Secretary of State Wendy Sherman and ministers and officials from Japan, Australia and New Zealand, but did not attend.

Sherman said at a press conference that Sogavre was at the press event for the ceremony, which marked the 80th anniversary of the Battle of Guadalcanal, and that when she met him, she told him she was sorry he was not present.

“The real sadness here is that I think he missed a real opportunity to remember how strong this bond was 80 years ago that led to freedom here in the Solomon Islands,” she told reporters, according to a transcript released Monday.

The US ambassador to Australia, Caroline Kennedy, who also attended a series of ceremonies, paid tribute to the two Solomon Islanders who saved the lives of her father, John F Kennedy, who later became US president.

Sherman said her meeting with Sogavre was wide-ranging and “very courageous” and that she expressed US concerns about his government’s security deal with China.

Honiara and Beijing have refused to allow a military base because of the deal. Read on

In a televised interview on Monday, Sherman said Sogaware had repeated his assurances that there would be no Chinese base, but that the US and other Pacific nations would be “watching very carefully to see what happens here”.

“It’s the Pacific Islands Forum, other countries that are very concerned about not having a Chinese military base because that would threaten all the islands of the Pacific,” she told the ABC’s 7:30 Report programme.

Sogware “will have to answer to his own citizens as to why he decided not to attend the Guadalcanal ceremony,” she added.

Sherman praised the role of the Solomon Islands in working with the US in World War II.

Sogware’s office did not respond to a Reuters request for comment, but in a statement to local media he denied reports that he had rejected the US by not attending the memorials.

A Japanese navy sailor was stabbed at another Guadalcanal memorial service in Bloody Ridge on Monday, a spokesman for the Japanese embassy in the Solomon Islands told Reuters.

The victim was treated at the scene by a US military medic and required two stitches, the spokesman said.

Solomon Islands police said in a statement that a local man was arrested after a Japanese delegation’s media officer was attacked with a pair of scissors.

Reporting by Kirsty Needham in Sydney and Lucy Kramer in Wellington; Editing by Edwina Gibbs, Raju Gopalakrishnan and Mike Harrison