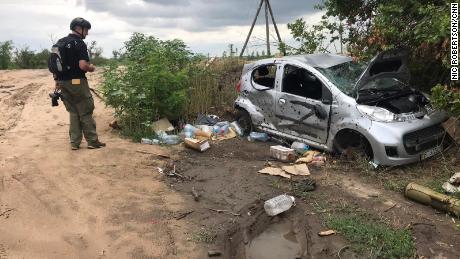 Ukrainian officials say the Russians are moving command posts from the north to the south of the Dnipro River because of extensive damage to bridges.

The first deputy head of the Kherson regional council, Yuriy Sobolevsky, claimed on his Telegram channel that a significant part of the Russian military command had already left the city of Kherson. Ukrainian forces are advancing towards Mykolayiv, about 25 kilometers (15.5 mi) north of the city.

Much of the Kherson region has been occupied since Russia’s invasion of Ukraine began. As part of Kiev’s counteroffensive to try to retake lost territory in the south, Ukrainian forces have targeted critical bridges to disrupt supply routes in and around Kherson.

The Institute for the Study of WarA US-based think tank said on Sunday that the Russians could move across the river “if the Ukrainian offensive breaks all ground lines of communication connecting the right bank of the Dnipro River to avoid being trapped in the city of Kherson. Russian rear.”

In the past few days, videos have appeared on social media showing renewed long-range artillery attacks on the Antonievsky bridge and the road bridge over the dam near Nova Kakhovka, making them inaccessible to heavily armored vehicles. In some areas, the river is 1 kilometer (0.6 mi) wide, making pontoon bridges impractical.

The Ukrainians have also targeted several railway lines from the Russian-occupied Crimea peninsula to Kherson and Zaporizhia regions. On Tuesday, a series of massive explosions rocked the town of Zankhoi on the main road to Kherson. A recent video showed a large stockpile of military vehicles and ammunition at the site.

Ivan Fedorov, the mayor of occupied Melitopol, said on Ukrainian television on Monday that Russian forces were still clearing debris from the site of a railway bridge near the city that took place last Friday.

“Currently, the enemy uses Melitopol as a logistics center for trans-shipment of ammunition and heavy weapons. The enemy transports most of the ammunition by rail,” he added.

Fedorov says he gets information from partisan networks in the city.

In the last 10 days, two railway lines in Crimea have been attacked. Last week, local residents reported several hours of explosions in the Henichesk district, a port area near the Sea of ​​Azov, and a train was also struck further west in Brylivka.

According to the Southern Operational Command of the Ukrainian Army: “Over the past week we have destroyed more than 10 ammunition warehouses and military equipment clusters. These hits do not allow the transfer of heavy equipment through these bridges.”

None of this indicates a Russian withdrawal from Kherson.

They have attempted regular counter-attacks against Ukrainian units attempting to push south into Kherson, limiting them to modest gains in the flat farmlands bordering the Mykolayiv region.

But the Russians need a steady flow of munitions and fuel to continue their operations in the region. And bridges and railroads are easy targets.

Now America has supplied them Anti Radar Harms Missiles, the Ukrainians have begun using fighter jets and helicopters as well as highly accurate long-range artillery in the region. Their targeting is also aided by nascent resistance movements in occupied territories.

The Ukrainians have recognized that going toe-to-toe with Russian forces in a fierce artillery and tank battle is much less effective than using newly acquired tools — and some old ones — to hit Russian rear positions and infrastructure.