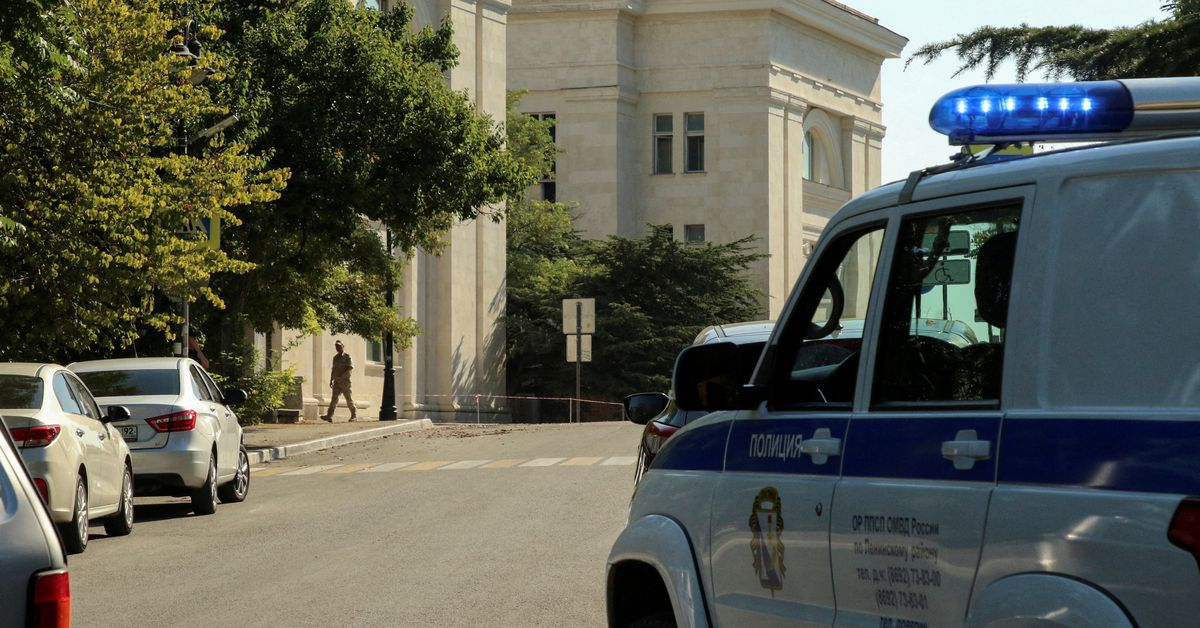 A view showing the headquarters of the Russian Black Sea Fleet after a combat drone strike in Sevastopol, Crimea on July 31, 2022. REUTERS/Stringer/File Photo

LONDON, Aug 17 (Reuters) – Russia’s Black Sea fleet has installed a new commander in annexed Crimea, the RIA news agency said on Wednesday, citing sources, after Russian military bases on the peninsula were rocked by explosions over the past nine days.

If confirmed, the removal of the previous commander, Igor Osipov, would be the most senior ouster of a military officer in nearly six months since Russia invaded Ukraine, causing huge losses in men and equipment.

The state-owned RIA quoted sources as saying that new chief Viktor Sokolov was introduced to members of the fleet’s military council in the port of Sevastopol.

One source said it was “normal” that the appointment was not publicly announced at a time when Russia was conducting its special military operation in Ukraine.

The Black Sea Fleet, which has a venerable history in Russia, has suffered several public humiliations during the war launched by President Vladimir Putin on February 24.

In April, Ukraine hit its flagship warship, the Moskva, with Neptune missiles, causing it to catch fire and sink. Read on

Last week, the Saki air base in southwestern Crimea, near the fleet’s headquarters in Sevastopol, was devastated by a series of explosions that destroyed eight warplanes, according to satellite images.

Then on Tuesday, explosions rocked an ammunition depot at a military base in the north of the peninsula. Russia called it an act of sabotage and indicated that Ukraine was responsible. Read on

On Wednesday, Russia’s FSB security service said it had detained six members of what is known as an Islamist terror cell in Crimea, but did not say whether they were suspected of involvement in the blasts.

The Black Sea Fleet is much larger than the Ukrainian Navy and a source of national pride dating back to 1783 under Empress Catherine the Great.

Crimea, which Russia seized from Ukraine in 2014 and has since heavily fortified, provides a key supply route for Russian invasion forces occupying southern Ukraine, where Kyiv is planning a counter-offensive in the coming weeks.

The fleet has blockaded Ukraine’s ports since the start of the war in February, snarling vital grain exports, which have now begun to flow again under a deal brokered by Turkey and the United Nations.

The fact that Ukraine is apparently capable of launching devastating attacks against what Moscow sees as a safe rear bastion has served as a morale-boosting coup for Kiev.

The former commander, Osipov, 49, had been in charge since May 2019, according to his official biography on the Defense Ministry website.

In his place, Sokolov, 60, had extensive experience commanding minesweeping ships and units in the 1980s and 1990s, then held several posts in the Pacific and Northern Fleets, later serving as deputy commander. As of 2020, he is the head of a prestigious military academy.

Reported by Reuters; Editing by David Holmes and Alex Richardson

Chief author on Russia and CIS. Worked as a journalist on 7 continents with postings in London, Wellington, Brussels, Warsaw, Moscow and Berlin and reported from 40+ countries. Covered the breakup of the Soviet Union in the 1990s. Security correspondent from 2003 to 2008. Speaks French, Russian and (rusty) German and Polish.