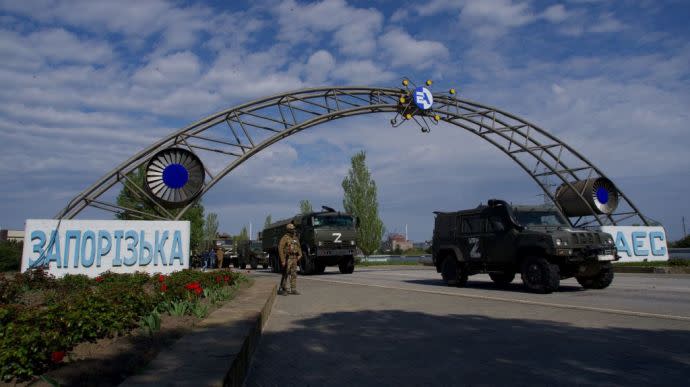 Russian occupation forces have placed several artillery systems on the territory of the Zaporizhia Nuclear Power Plant (ZNPP). They are using these systems to fire at the power plant, while the shells seem to come from Nikopol.

source: An anonymous ZNPP engineer in an interview for BBC News Ukraine

Quote from ZNPP Engineer: “On the territory of the plant there is an area where heavy metal structures such as new steam generators are stored. That is where the Russian artillery systems are currently installed; they are pretending to be firing at the ZNPP. Hit from Nikopol.

Details: An unidentified ZNPP activist believes that such firing does not endanger the critical facilities of the power plant because Rosatom representatives have carefully studied the layout of the plant and are helping the Russian military adjust their fire, “they tell them where to aim so that it is loud but dangerous.” No.” [Rosatom is the Russian state nuclear energy corporation that has been overseeing the ZNPP since it was captured by the Russian forces – ed.]

Quote from ZNPP Engineer: “The consequences of such firing are not as serious for Ukraine in general, but for ZNPP they can be fatal… We need at least one power unit to work, regardless of which power grid it is connected to. First of all, this means that we need other power units at some point. Secondly, it is necessary to prevent a possible nuclear disaster.

They know that. But what are they doing? They continue to damage high-voltage power lines, which connect ZNPP to Ukraine’s power grid. Meanwhile, they keep saying ‘we can help you if the neo-Nazis in the Ukrainian armed forces destroy your last power line’.

What will their ‘help’ be? They will allow us to ‘connect’ ZNPP to the Russian-controlled grid via Melitopol and Zankoy. If we suddenly ‘press zero’, i.e. blackout, we need to get power ‘from outside’ to be able to run the pumps that cool the spent nuclear fuel.

So the Russians are deliberately creating the conditions for a blackout so they can ‘help’ us. Right now, this seems like a very plausible scenario. Maybe tomorrow, maybe the day after, they will have destroyed the last power line.”

For more information: ZNPP engineers believe that an accident at ZNPP will be more similar to the accident at Japan’s Fukushima power plant than the Kornobil disaster.

“The Fukushima disaster happened because the earthquake and tsunami caused the Fukushima disaster [nuclear] Reactor cooling process. As a result, a steam explosion occurred in the active zone, destroying the hermetic zone around the reactor. There was a leak of radioactive material. This situation can also occur at ZNPP, but not due to a natural disaster. This will be due to Russian firing,” he said.

Only one-tenth of the entire power plant’s workforce is currently working there, he added. “From the beginning, almost half of the staff left in the last few weeks [Russian] attacks,” he explained.