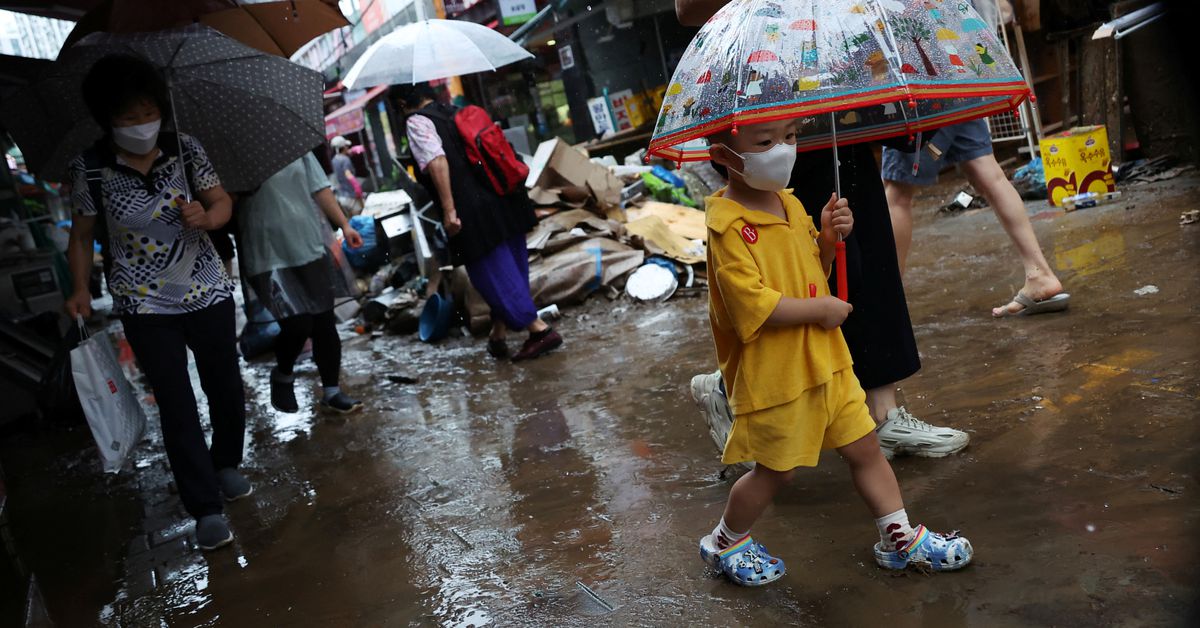 More than 100 mm (3.9 inches) of rain fell per hour in the southern part of the national capital late Monday, with some parts of the city receiving as much as 141.5 mm, the heaviest in a decade, the Korea Meteorological Administration (KMA) said.

Rainfall accumulated in Seoul since midnight on Monday was 451mm by 2pm on Tuesday, with more forecast.

President Yoon Suk-yeol on Tuesday visited the semi-basement apartment where three family members died the night before after fast-moving floodwaters filled the space.

The dangers of such underground flats, called Banjiha, were famously depicted in a flood scene in the 2020 Oscar-winning film “Parasite.”

Yoon told residents in the area that they would try to get their lives back to normal as soon as possible and instructed officials to look into measures to better ensure the safety of homes, according to a statement from his office.

At least five people were killed in Seoul and three in neighboring Gyeonggi Province early Tuesday, the headquarters of the Central Disaster and Safety Countermeasures said.

Four people, including three family members, died after drowning in flooded buildings, one was believed to have been electrocuted, another person was found under the rubble of a bus stop and two others died in landslides, it said.

At least nine people were injured, while seven others are missing.

A boy using an umbrella makes his way through a flooded street after heavy rains at a traditional market in Seoul, South Korea, on August 9, 2022. REUTERS/Kim Hong-Ji

In the glitzy, densely populated Gangnam district, some buildings and stores were flooded and without power, while cars, buses and subway stations were submerged, leaving people stranded.

Lim Na-kyung, a 31-year-old office worker, recounted her fears Monday evening, saying the situation reminded her of a scene from the 1997 movie “Titanic.”

“I had to go higher and higher because the building was sinking fast… I couldn’t believe I was stuck in a building with 40 other people in the middle of Gangnam district,” said the mother of two, who eventually had to spend the night at a fourth-floor Pilates center.

Data shows that at least 765 facilities were damaged. Around 52 highways and roads have been blocked.

About 391 people were displaced in the Greater Seoul area, most of whom had to stay in local schools and gyms. Another 399 have temporarily relocated to community centers and schools, according to the data.

The headquarters warned of the worst crisis and requested organizations to adjust their working hours.

The KMA has issued a heavy rain warning for the capital and a metropolitan area of ​​26 million, as well as parts of Gangwon and Chungcheung provinces.

The KMA expects heavy rain to continue in central parts of the country till at least Wednesday.

While South Korea often experiences heavy summer rains, “such a sharp increase in precipitation and frequent heavy rains cannot be explained without a larger trend of climate change,” a KMA official told Reuters on condition of anonymity. “This phenomenon appears to be occurring more frequently due to climate change which has made summers longer.”