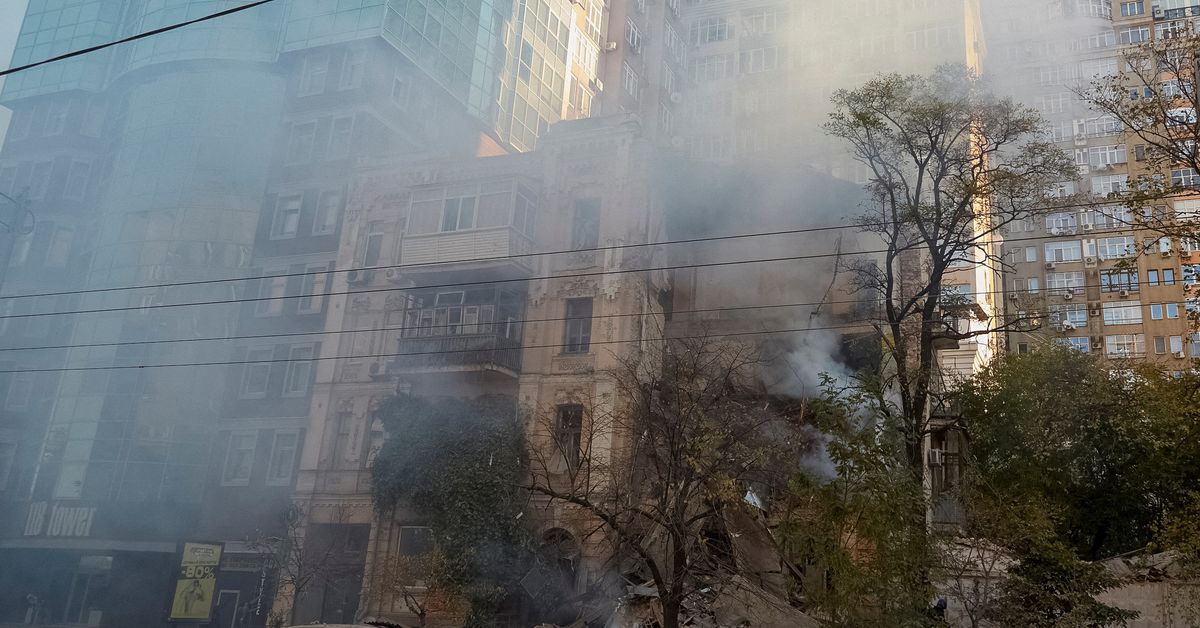 The command of the Ukrainian Air Force said that 33 missiles were fired at Ukraine on Saturday morning and 18 of them were shot down.

10 Oct Since then, Russia has launched a series of devastating salvos against Ukraine’s energy infrastructure, hitting at least half of its thermal power generation and up to 40% of the entire system.

Shortly after dawn on Saturday, local officials in Ukraine began reporting strikes and power outages at power facilities as engineers scrambled to restore the devastated network. The governor advised residents to store water in case of cut-off.

As of Saturday afternoon, more than a million people across Ukraine were without power, including 672,000 in the western region of Khmelnytskyi alone, presidential adviser Kirill Tymoshenko said.

Air raid sirens sounded across the country again at 11.15am local time (0815 GMT), after the first wave of missiles in the early hours of the morning.

Mykhailo Podoliak, an aide to the Ukrainian president, said Moscow wanted to create a new wave of refugees in Europe through the strikes, while Foreign Minister Dmytro Kuleba said they committed genocide.

“Deliberate attacks on Ukraine’s critical civilian infrastructure are part of Russia’s genocide of the Ukrainian people,” Kuleba wrote on Twitter.

“The amount of damage is comparable or may exceed the results of the attacks between October 10-12,” Ukrainergo wrote on the Telegram app, referring to the first wave of strikes on Ukraine’s power system last week.

“This possibility exists…we must understand and keep this in mind,” he told Ukrainian outlet Ekonomichna Pravda.

Reporting by Max Hunder in Kyiv and Valentin Ogirenko in Mykolaiv; Editing by Kirsten Donovan