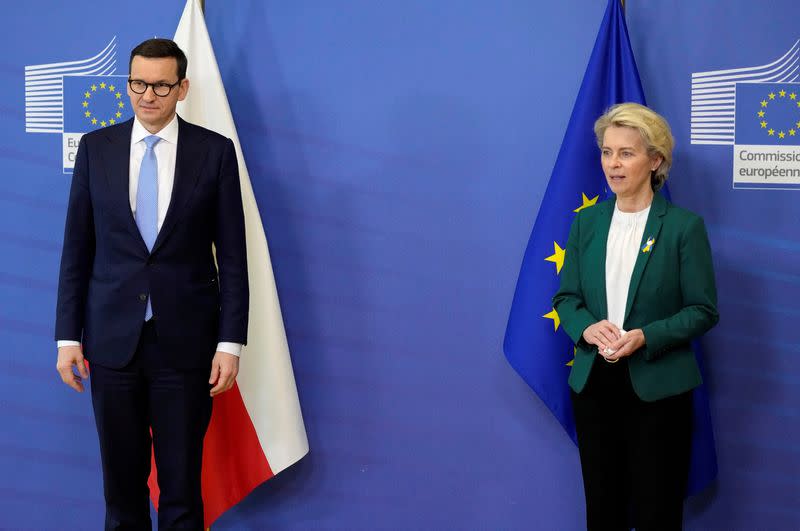 WARSAW (Reuters) – Poland could hit back at the European Union if Warsaw doesn’t get its share of the pandemic recovery fund, ruling party politicians said, after Brussels signaled they were unhappy with the country’s latest judicial reforms.

More than 35 billion euros ($36 billion) in Covid-19 recovery grants and loans were withheld in Poland amid a dispute over reforms to the judiciary, which EU executives say breach democratic standards.

In June, the European Commission (EC) approved funding for Poland, but its head, Ursula von der Leyen, said more work was needed on the rule of law during a visit when she met Polish Prime Minister Mateusz Morawiecki.

The ruling Law and Justice (PiS) party has said its major reforms are aimed at making the system more efficient and rejecting interference in the courts for political gain.

“If there is an attempt to withhold payments … and the European Commission tries to pressure us, we have no choice but to pull out all the guns in our arsenal and respond with a barrage of fire,” Krzysztof Sobolewski, the secretary general of PiS, told Polish public radio.

PiS did not say what actions would be considered, but Cabinet Minister Michal Wojcik, a member of the conservative United Poland party – the junior partner in government – hinted that Poland could veto some EU decisions.

“We are dealing with people who are not following the terms of the contract … I think you have to play hard,” he told private TV Polsat News.

Poland adopted a law in May that replaced the controversial disciplinary chamber for judges with a new body, and on Tuesday the Supreme Court drew candidates from among its judges to the new chamber.

But von der Leyen said in an interview at the end of July that the new law did not give judges the right to question judicial appointments without facing disciplinary proceedings, an issue that must be resolved to secure EU funding.

Commission spokeswoman Ariana Podesta said the new law was an important step but the EU’s preliminary assessment was that it did not allow a judge to question another judge’s status without risking disciplinary proceedings.

“This issue … needs to be addressed for recovery and resilience plan commitments … no official assessment has been made, as Poland has not requested any payment so far,” Podesta said during a briefing.

Warsaw’s refusal to comply with EU demands on the rule of law has fueled criticism among opposition politicians that PiS could eventually try to force Poland out of the bloc, which the government has rejected.