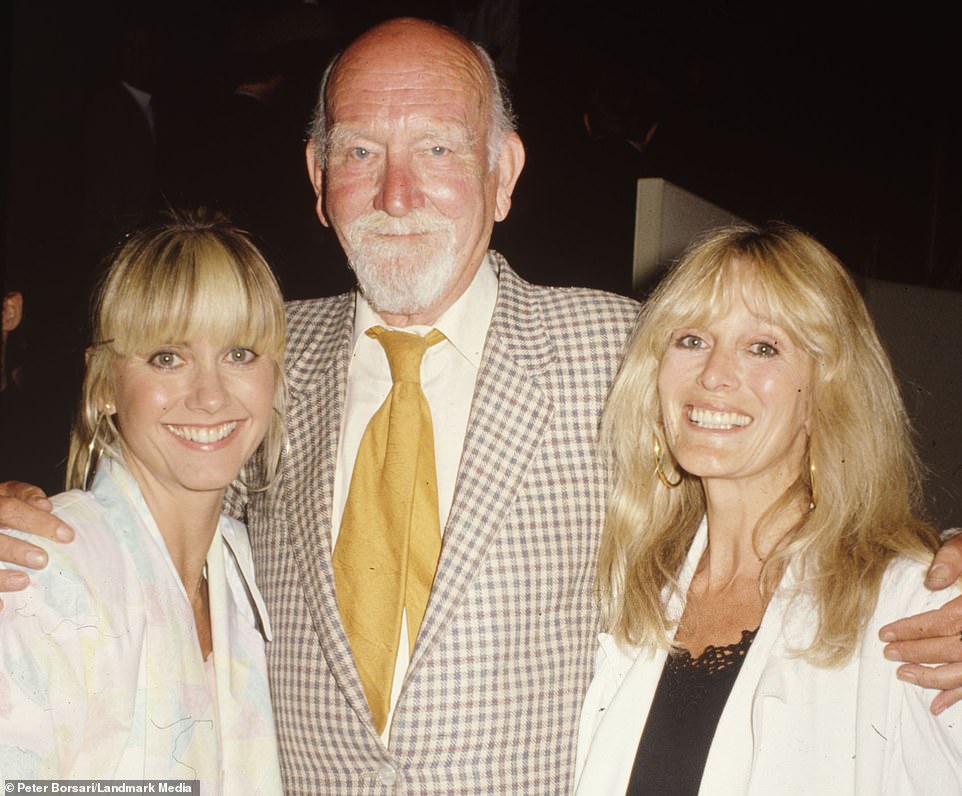 But while her story is one of glitz, glamour and international stardom, her father, Brinley, or ‘Brin’, spent much of his life in the shadows.

As an MI5 agent and Bletchley Park codebreaker, then an acclaimed educator, Brin’s career could not have been any more different from his daughter’s, but it was in many ways just as remarkable.

And he was far from the only exceptional character on Olivia’s family tree. Her grandfather was the renowned Jewish German physicist Dr Max Born, who was forced to flee to England after the Nazis came to power in 1933.

He ended up teaching at the University of Edinburgh for twenty years before returning back to Germany. In 1954, Born was awarded the Nobel prize in physics for his ‘Born Rule’, a foundational theory of quantum mechanics.

His son and Olivia’s uncle, Gustav Born, was a leading pharmacologist, who was among the first allied personnel to witness the medical aftermath of the atomic bomb on Hiroshima in 1945.

After noting the tendency of victims to suffer from severe bleeding disorders, he concluded this was due to a lack of blood platelets caused to radiation damage. Subsequent research into the role of platelets made a considerable contribution to the detection of thrombosis.

As if being related to two scientific geniuses was not enough, Olivia was also the third cousin of Ben Elton, the actor and comedian who helped write the legendary sitcom Blackadder. 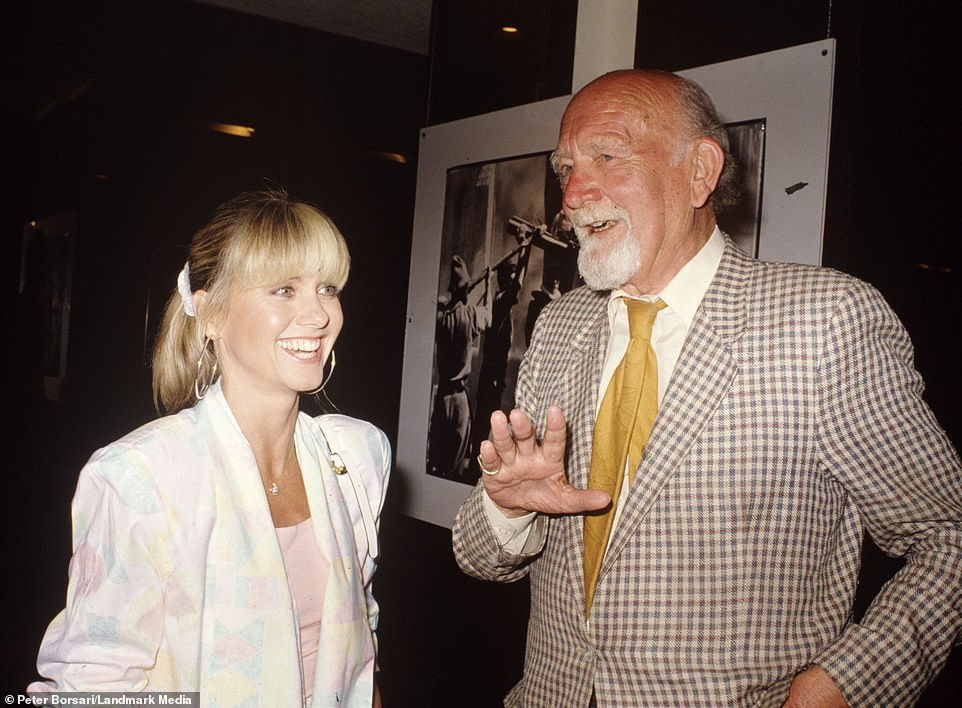 Brin (right, with Olivia in the late 1980s) was seconded into MI5 to interrogate captured German pilots, and used his charm and familiarity with upper-class German society to put them at ease and elicit information 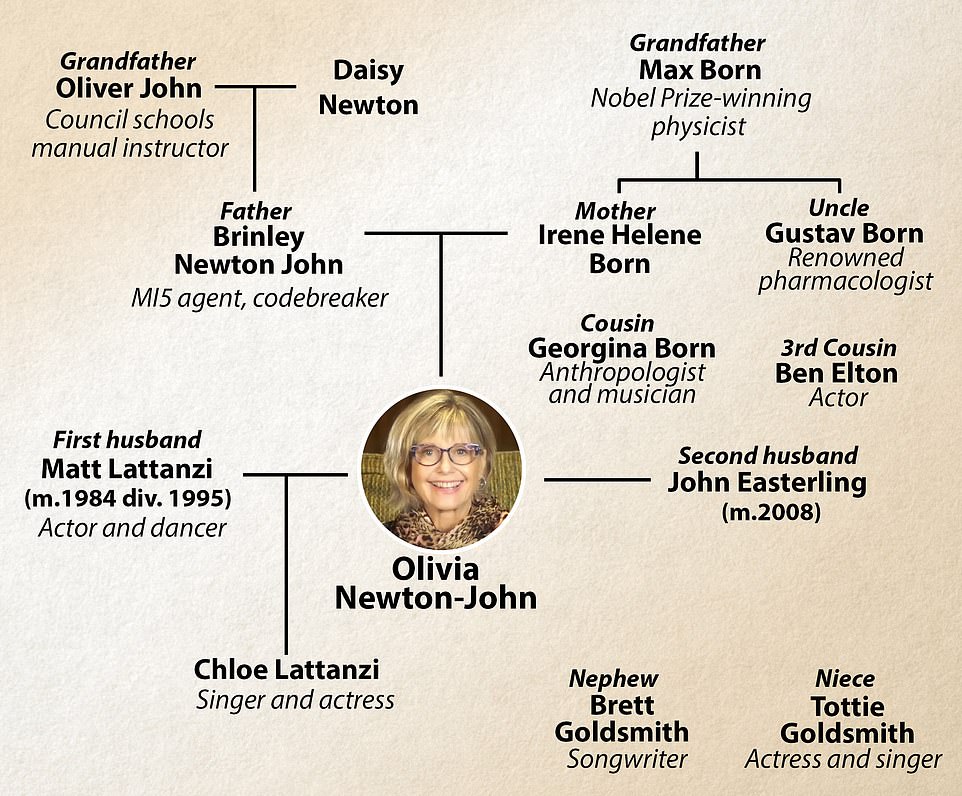 Olivia’s father, Brinley Newton John, was born on March 5, 1914, in the new Cardiff’s Market Tavern, and attended the city’s Canton High School, which had recently introduced a new curriculum that included Latin, German and choral singing.

Brin, who played violin and sang in the school choir, thrived under the new regime and went on to win a rare scholarship at Gonville and Caius, the fourth oldest Cambridge University college, founded in 1348.

He achieved a double first class degree in modern and medieval languages in 1935 and became an assistant master at Christ’s Hospital the following year.

By this time he had met Irene Born, the daughter of the Nobel-winning German Jewish physicist and mathematician Dr Max Born, who fled Nazi Germany in 1933 and went on to become instrumental in the development of quantum mechanics.

He married Irene in 1938 at the Kensington Registry Office, and that same year moved to Stowe School in Buckinghamshire.

But the outbreak of World War Two interrupted his career in education and he was commissioned into the RAF in 1940.

Brin was quickly noted for his fluent German, and he was seconded into MI5 to interrogate captured German pilots – using his charm and familiarity with upper-class German society to put them at ease and elicit information. 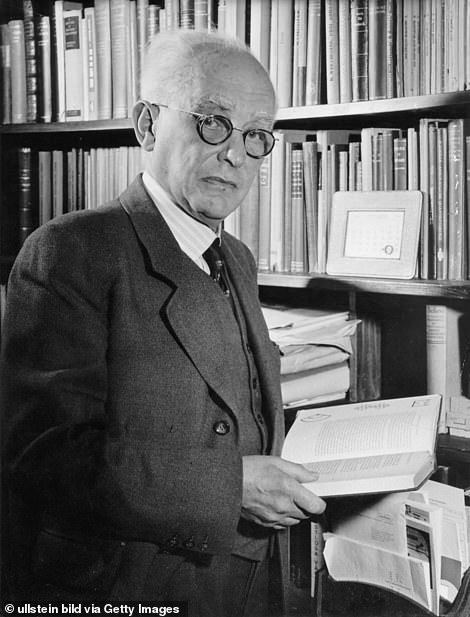 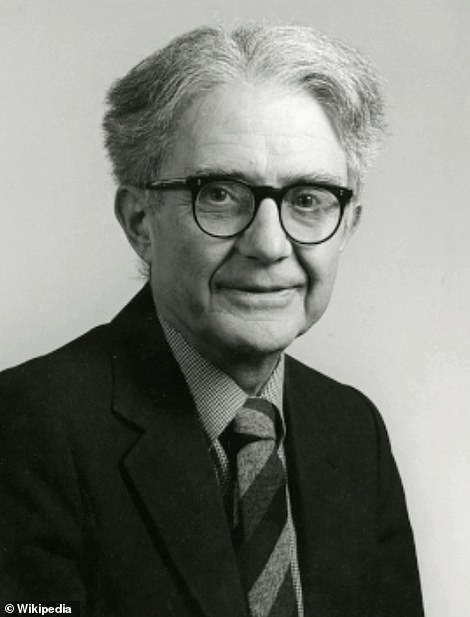 Olivia’s father was far from the only exceptional character on Olivia’s family tree, with her relatives also including renowned physicist Dr Max Born (left), her grandfather, and his son, Gustav, (right) a leading pharmacologist 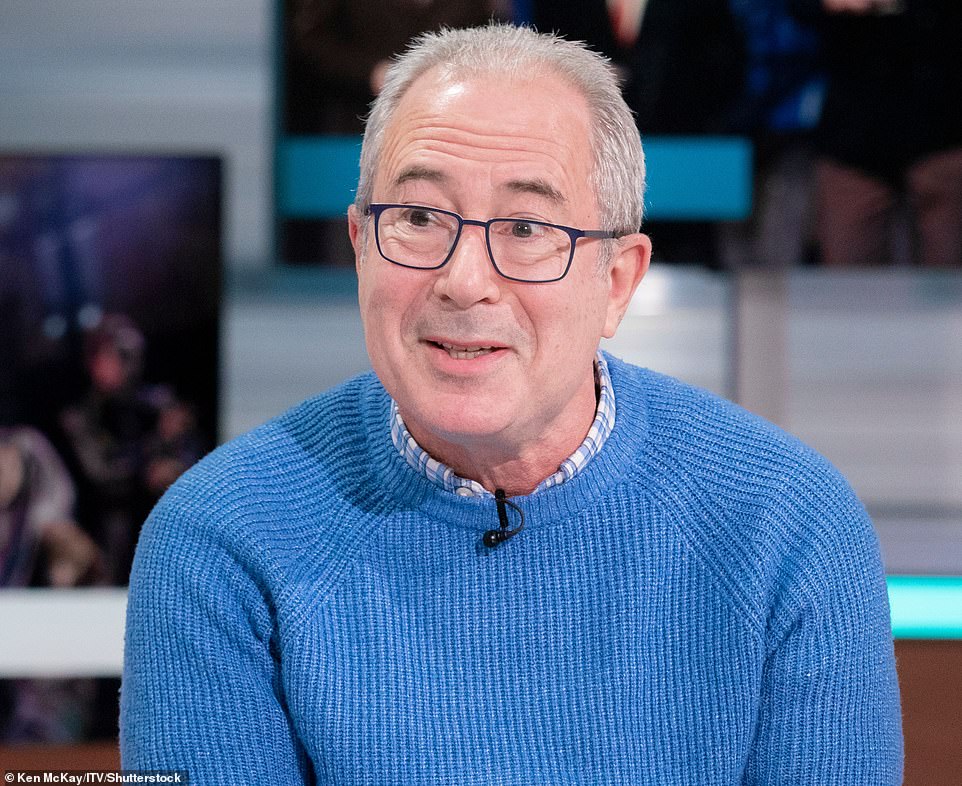 As if being related to two scientific geniuses was not enough, Olivia was also the third cousin of Ben Elton, the actor and comedian who helped write the legendary sitcom Blackadder 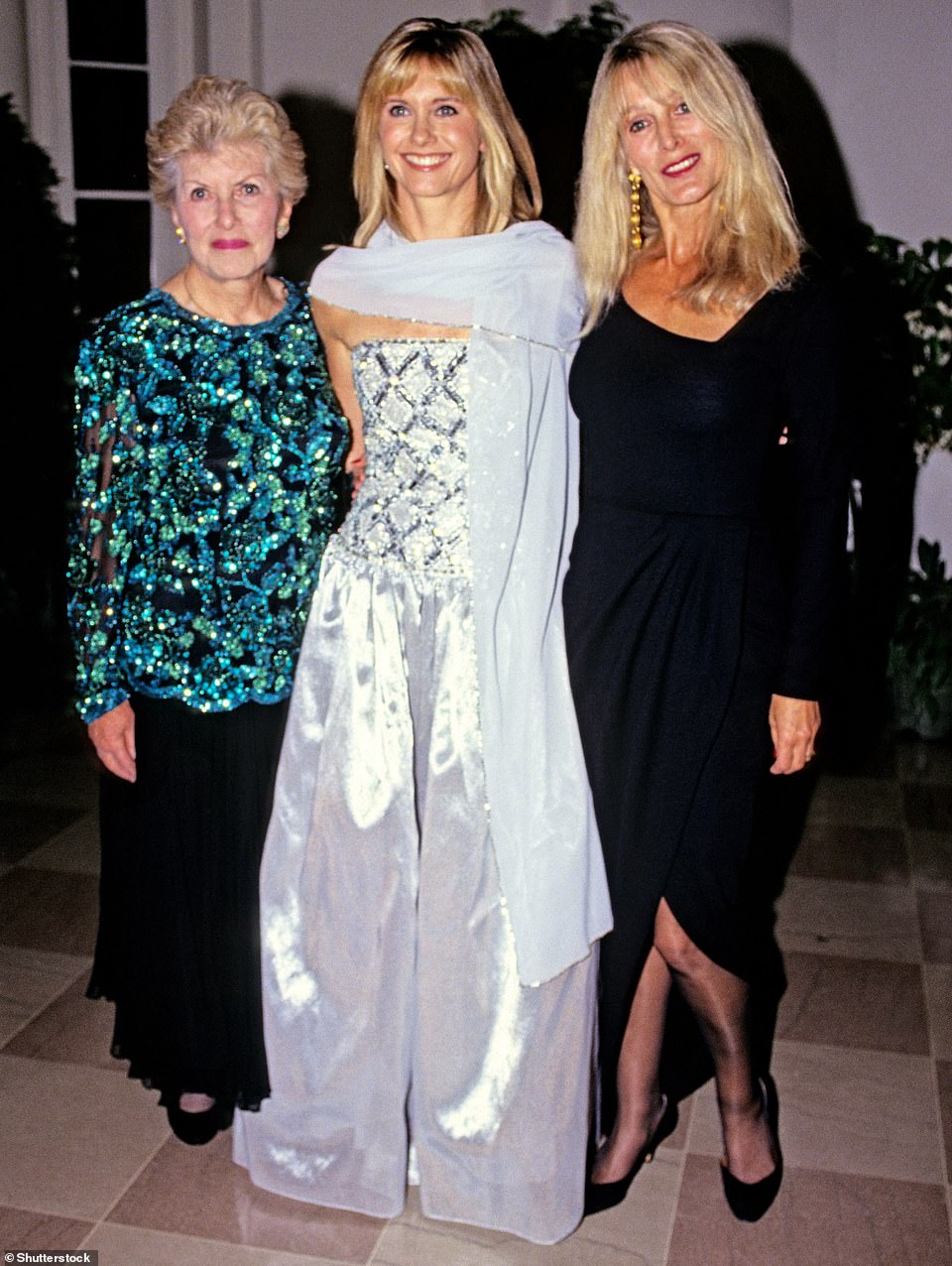 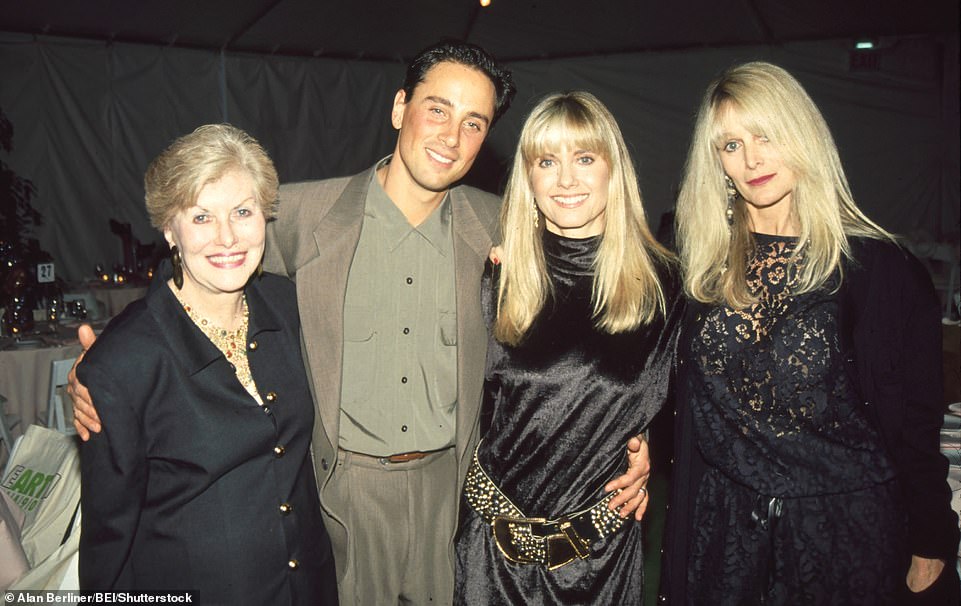 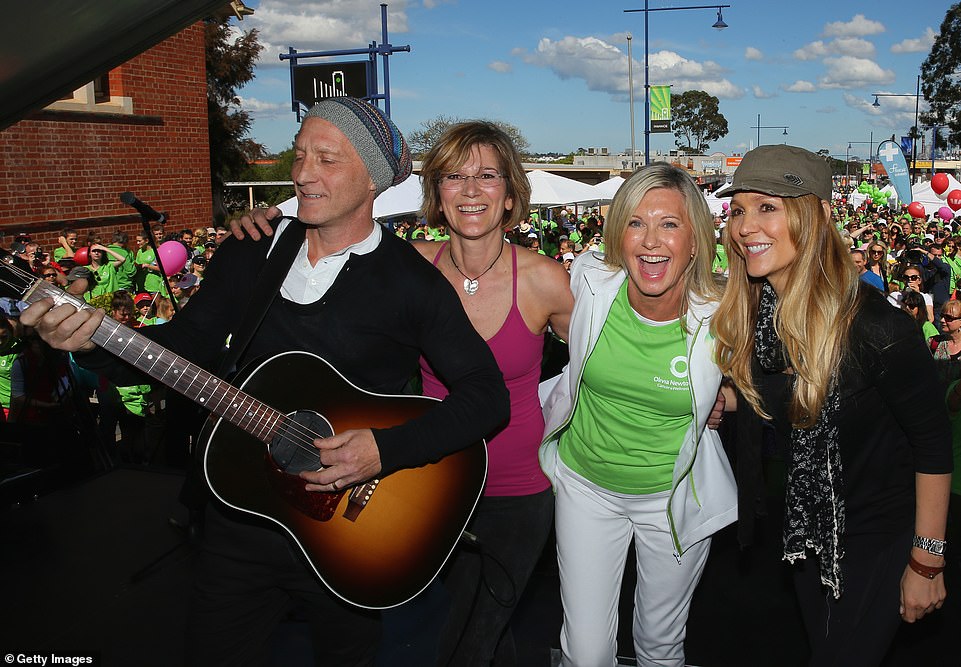 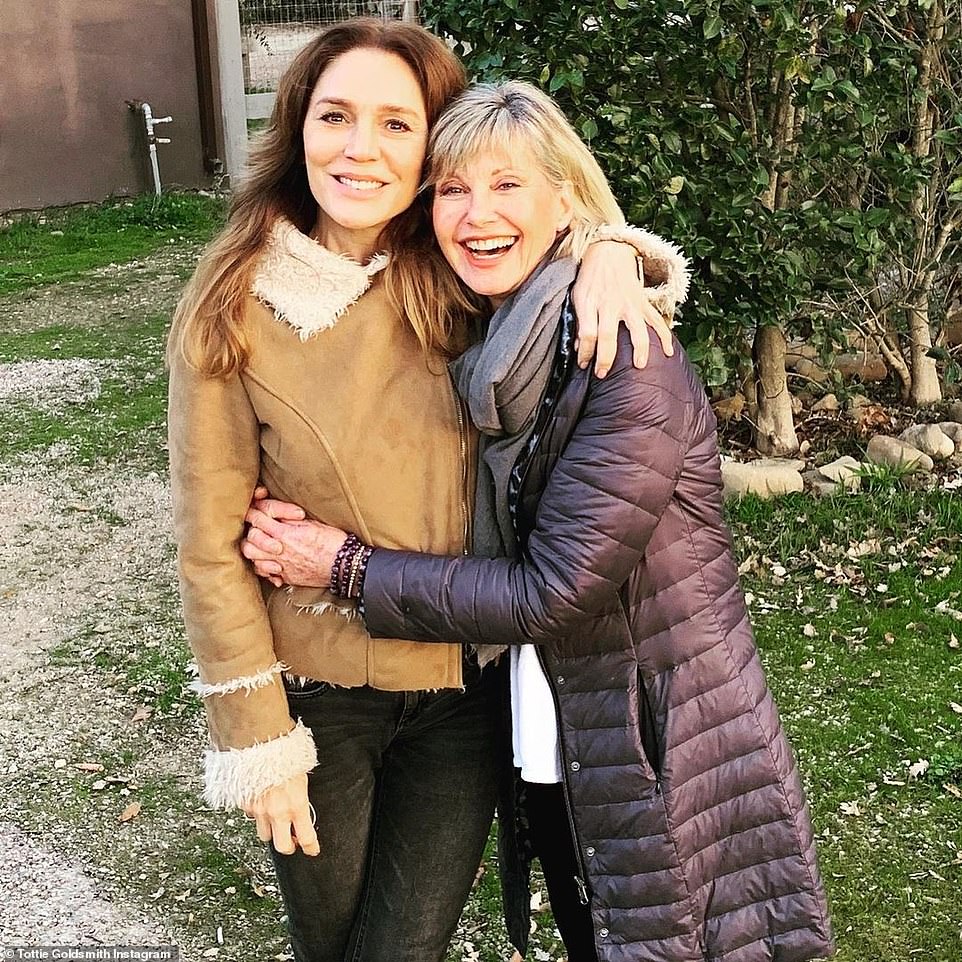 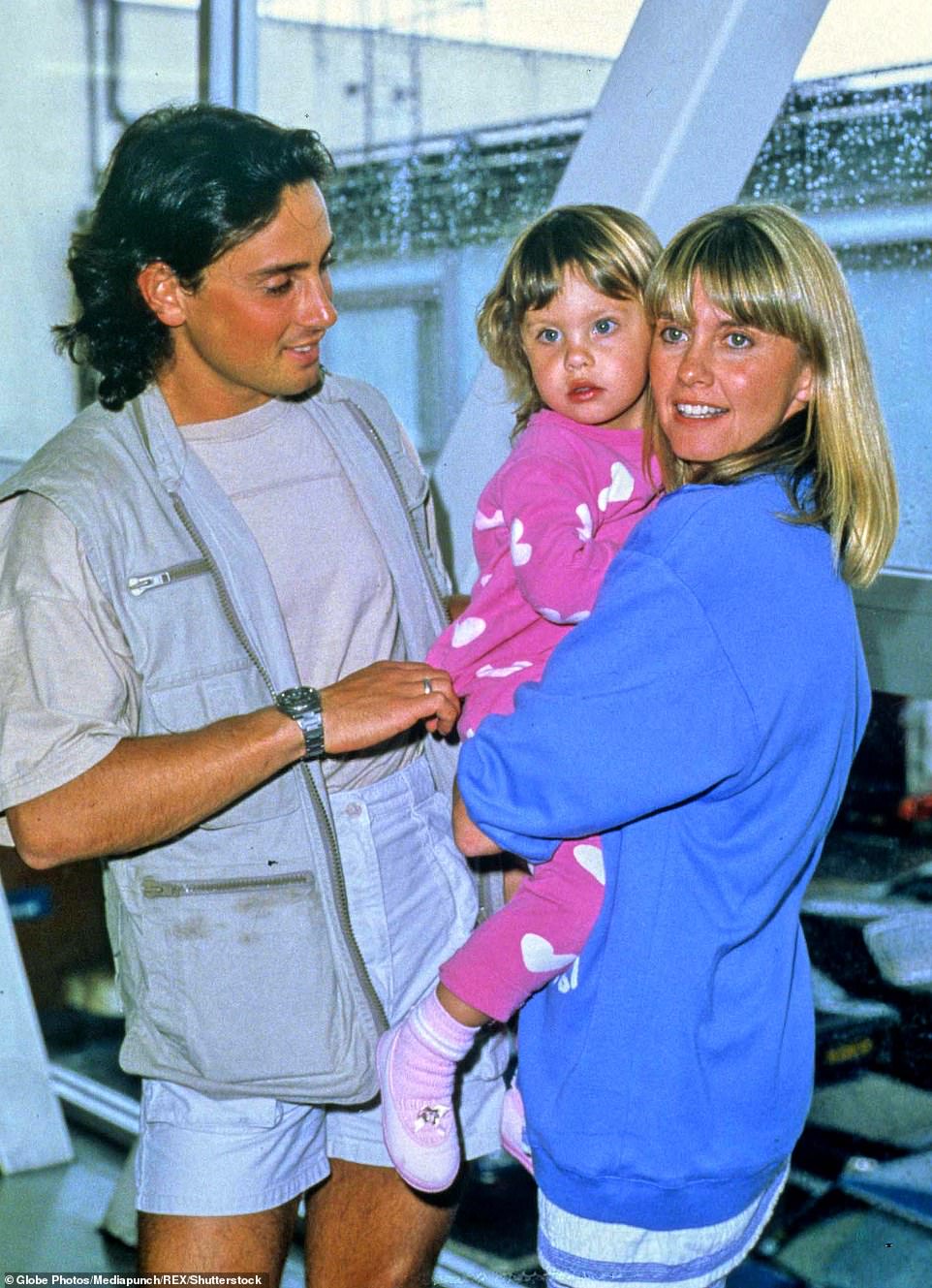 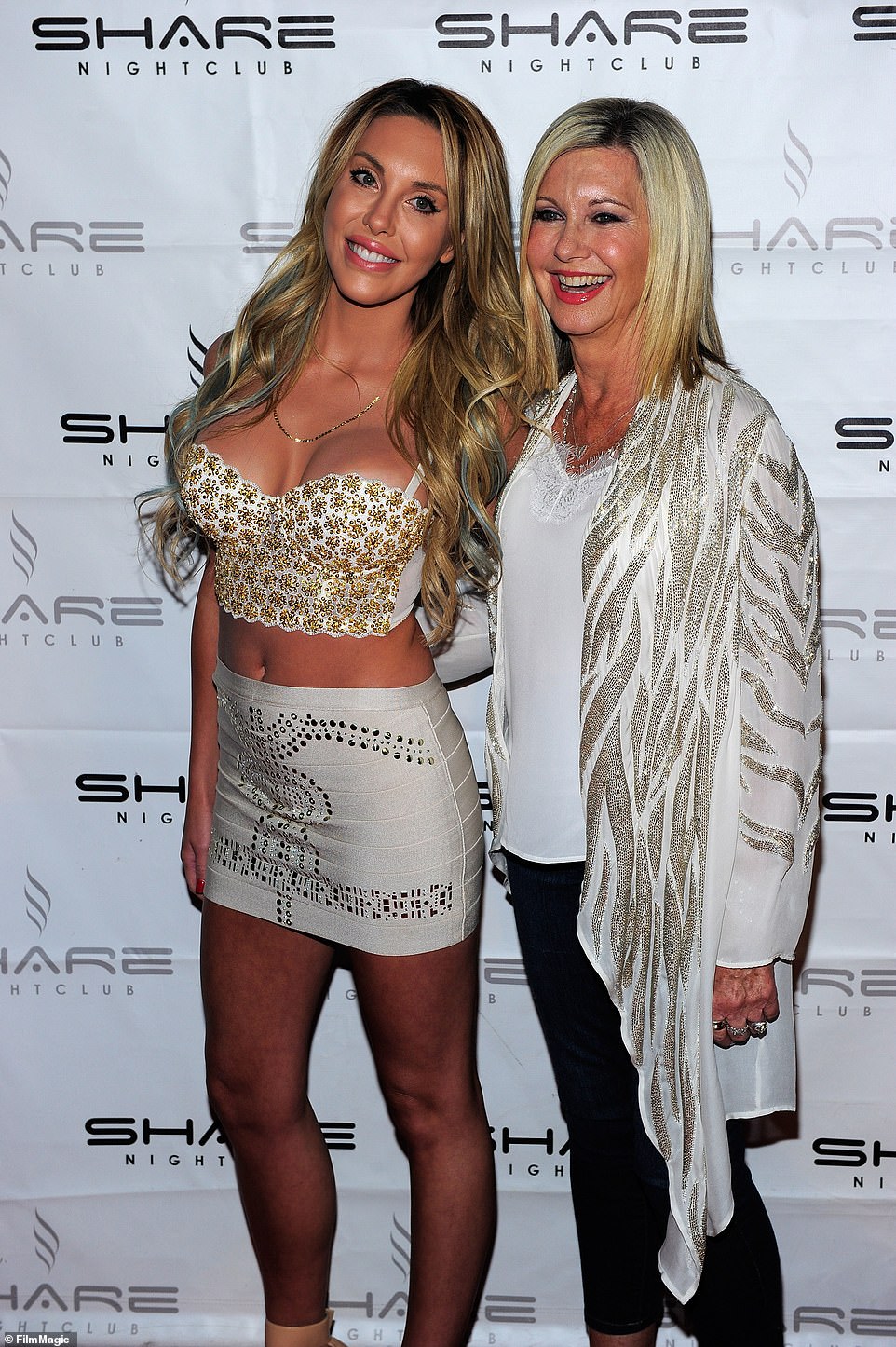 Chloe Lattanzi is pictured with her mother Olivia Newton-John at the 35th anniversary of ‘Xanadu’ at Share nightclub in Las Vegas, Nevada in 2015

Born on December 11th, 1882, in Breslau in the German empire (now Wroclaw in Poland) to the renowned embryologist Gustav Born, Max Born’s intellectual abilities were noticeable from an early age.

Studying first at König Wilhelm Gymnasium in Breslau, Born then attended the universities of Breslau, Heidelberg and Zurich. This was because the contemporary German higher education structure allowed students to transfer to different institutions and it is how Born ultimately ended up at the university of Gottingen, where he actually later became a professor of theoretical physics. As proof of Born’s incredible impact on the world of physics, his students included J.R Oppenheimer – the ‘father of the atomic bomb’.

Born was forced to flee Germany for England after the Nazis came to power in 1933 and ended up teaching at the University of Edinburgh for twenty years before returning back to Gottingen. In 1954, Born was awarded the Nobel prize in physics for his ‘Born Rule’.

The Born Rule is a 1926 theory of quantum mechanics that uses mathematical probability to predict the location of particles in a quantum system. It was a game-changer because prior to Born, pinpointing the position of particles involved a myriad of mathematical equations and calculations. However, Born’s Rule achieves a similar result with rows and columns of numbers (matrices) and the rules of probability.

The Google Doodle describes Born’s Rule as ‘a revolutionary theory [that] now provides the basis for practically all quantum physics predictions.’

Ian Lowry, a tour guide at Bletchley Park who wrote about Brin in a submission to the Daily Mail’s Answers to Correspondents column, described him as ‘urbane and relaxed’, qualities he exploited to the full during his intelligence work.

He was clearly valued by his superiors, and became one of the MI5 officers charged with interviewing Adolf Hitler’s deputy Rudolf Hess when he crash landed in a remote Scottish field in May 1941.

The bizarre solo flight, which Hess described as an attempt to negotiate peace with the United Kingdom but has never been fully explained, saw the leading Nazi taken into captivity for the rest of the war.

Decades later, by then a convicted war criminal and the final remaining inmate of the notorious Spandau Prison in Berlin, he hanged himself at the age of 93.

In 1942, Brin transferred to Bletchley Park, the now legendary hub of Allied code-breaking during the Second World War.

As an interpreter of intelligence that had been decoded, he was part of a small team that supplied General Montgomery with key information in the lead up to the Battle of el Alamein in 1942.

During quiet periods he found time to indulge his love of music, and once played the part of Mr Darcy in Pride And Prejudice.

After the war was over, Brin was able to return to his old career in education and he became Cambridgeshire High School for Boys, where he remained until 1954.

He was already father to a son and a daughter when his wife, Irene, gave birth to Olivia, their youngest child, on September 28, 1948.

The family moved to Melbourne in Australia, where Brin was appointed master of Ormond College, before moving to Newcastle University College in New South Wales to serve as Head of German. He would remain there for the rest of his career.

In 1959, Brin and Irene divorced. Irene would go on to encourage the young Olivia’s singing abilities, and allowed her to perform with three classmates in a short-lived girl group known as Sol Four.

Irene and Olivia eventually returned to London with her mother after she won a singing contest aged 14. 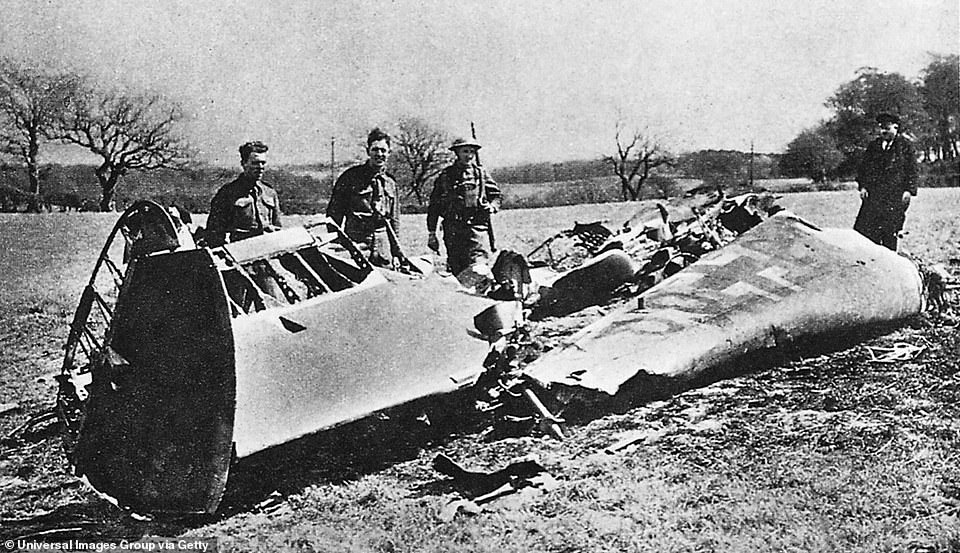 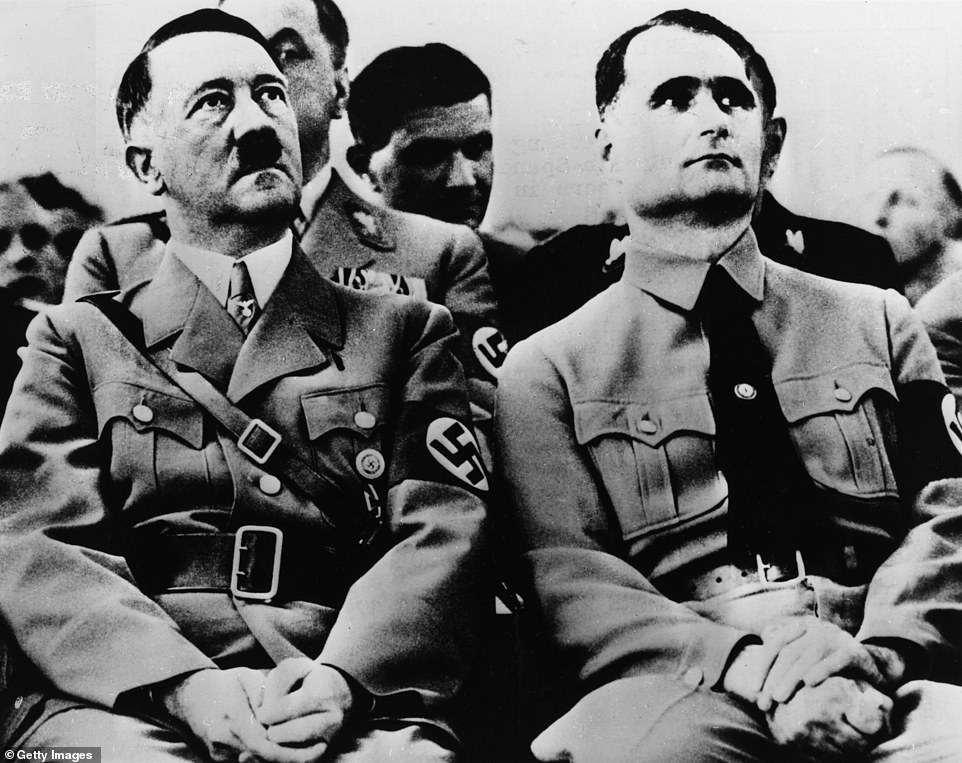 The bizarre solo flight, which Hess (seen right, with Hitler) described as an attempt to negotiate peace with the United Kingdom but has never been fully explained, saw the leading Nazi taken into captivity for the rest of the war

Back in Australia, Brin married bookshop manager and pianist Valerie Ter Wee Cunningham in 1963, and they had a son and a daughter.

His professional career continued to flourish, and he rose up the ranks to become deputy vice-chancellor in 1968.

After retiring, he spent much of his time studying and listening to classical music, and eagerly followed Olivia’s success in showbusiness.

Olivia died of breast cancer yesterday in California, where she was surrounded by her family. 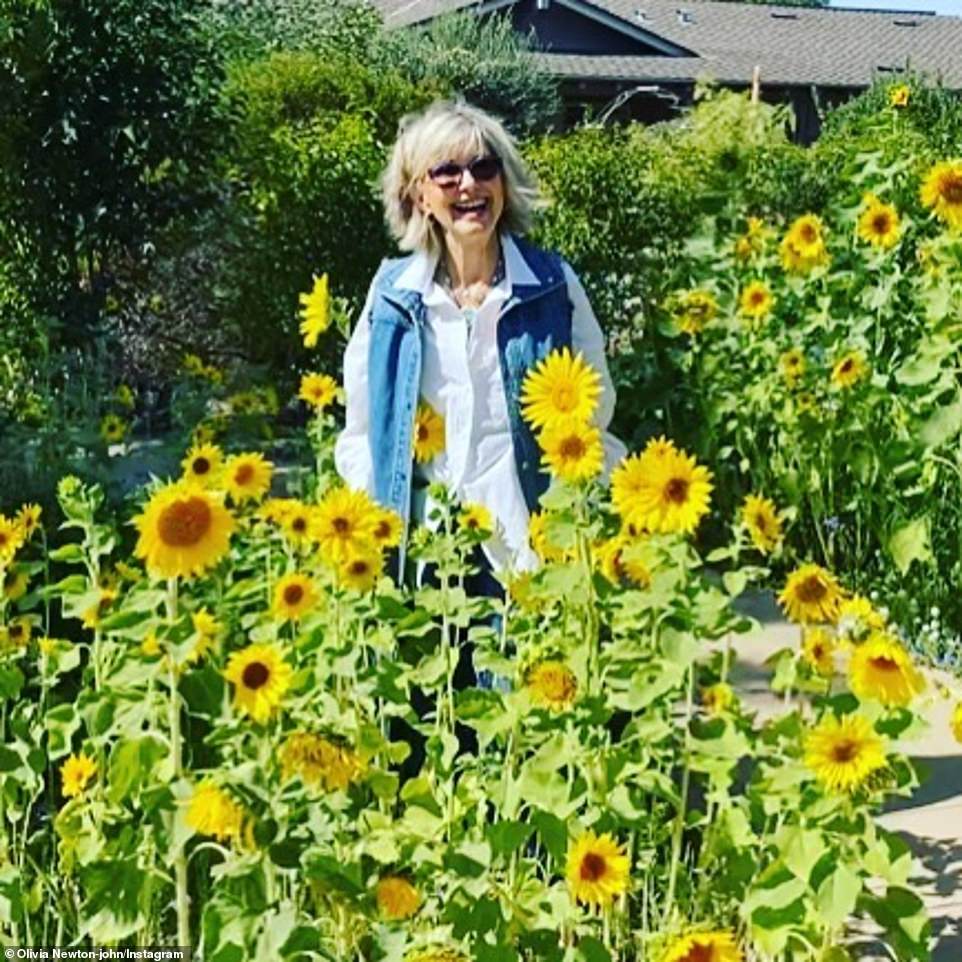 Final photo: On April 18, Olivia shared a rare candid photo of herself with a beaming smile beside a bed of sunflowers