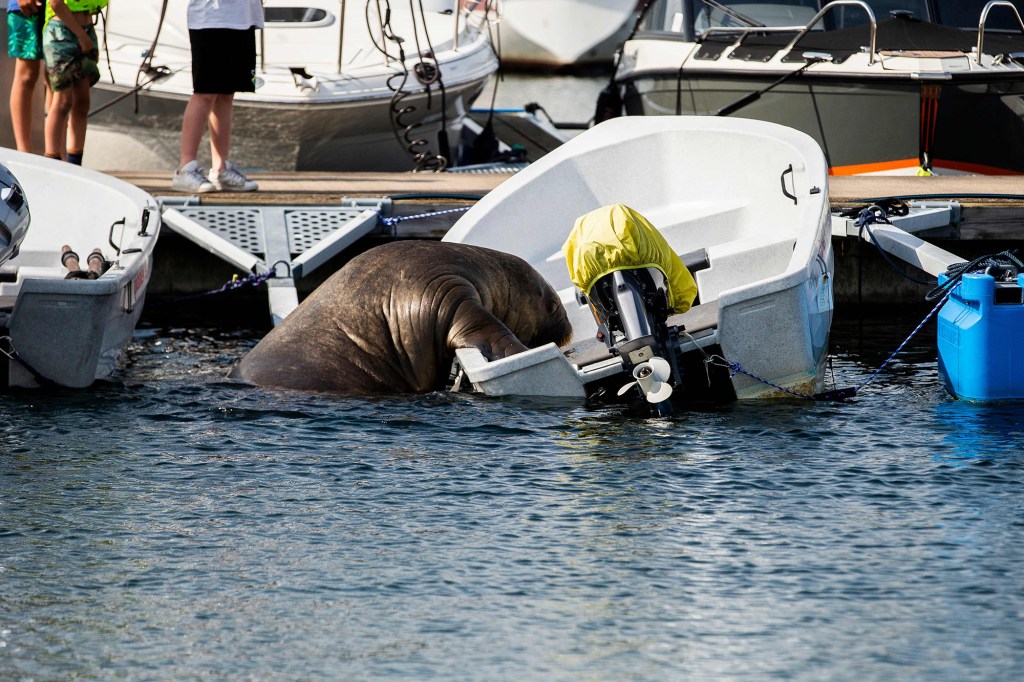 Freya, a social media celebrity walrus in Norway, has been euthanized after hysterical onlookers won’t stop trying to get close to her.

The 1,320-pound female walrus has become a popular attraction in recent weeks – delighting crowds of onlookers by climbing atop boats in the Oslo fjord, even playfully dunking some – despite repeated warnings from authorities that spectators stay away from the large marine mammal.

As recently as last month, officials said they hoped Freya would leave the populated inlet of her own accord, and that euthanasia would be a last resort if humans were at risk.

Norway’s fisheries directorate said Freya was humanely put down early Sunday morning based on an overall assessment of the continuing threat to human safety.

“Through on-site observations over the past week, it became clear that the public has ignored the current recommendation to keep a clear distance from walruses,” it said.

“Therefore, the Directorate concluded that the potential harm to people was high and animal welfare was not being maintained.”

The walrus is also a protected species.

Authorities said people were seen swimming with Freya, throwing objects at her and trying to get close to her for photos. The Directorate of Fisheries released a photo showing a large crowd of people, including children, standing close to the walrus.

The head of the directorate, Frank Bakke-Jensen, said other options were considered – including relocating the hulking walruses, but officials concluded that this was not a viable option “due to the extensive complexity of such an operation”.

“We sympathize with the fact that this decision may cause a backlash from the public, but I am adamant that it was the right call,” Bakke-Jensen said. “We have great respect for animal welfare, but human life and safety must take priority.”

Run AA, a professor of biology at the University of South-East Norway who has been tracking sightings of Freya, condemned the decision to put down the young, apparently healthy mammal as “too hasty”.

he wrote in a Facebook post Government officials have a boat to monitor the walrus’ movements and can warn the public at any time not to engage in water activities near it.

“Freya (would have) sooner or later exited Oslo Fjord, as all past experience has shown, so killing her was in my view completely unnecessary,” he wrote. “Norway is the country that killed Freya after nearly two years in the entire North Sea. What a shame!”

Freya has reached celebrity status beyond Norway’s shores this summer after videos of her climbing aboard a boat to bask in the sun in Oslo went viral.

Freya was videotaped chasing ducks, attacking swans and napping for hours on ships small enough to support her large frame.

Atlantic walruses typically live in the Arctic and are wary of most humans, but Freya — named after the Norse goddess of love and beauty — isn’t afraid of people.

Freya is believed to have come from Svalbard, a Norwegian archipelago in the Arctic Ocean more than 1,200 miles from Oslo.

It is unusual but not unheard of for walruses to travel to the North and Baltic seas. Another walrus, nicknamed Wally, was spotted last year on beaches and even on lifeboat docks in Wales and elsewhere.