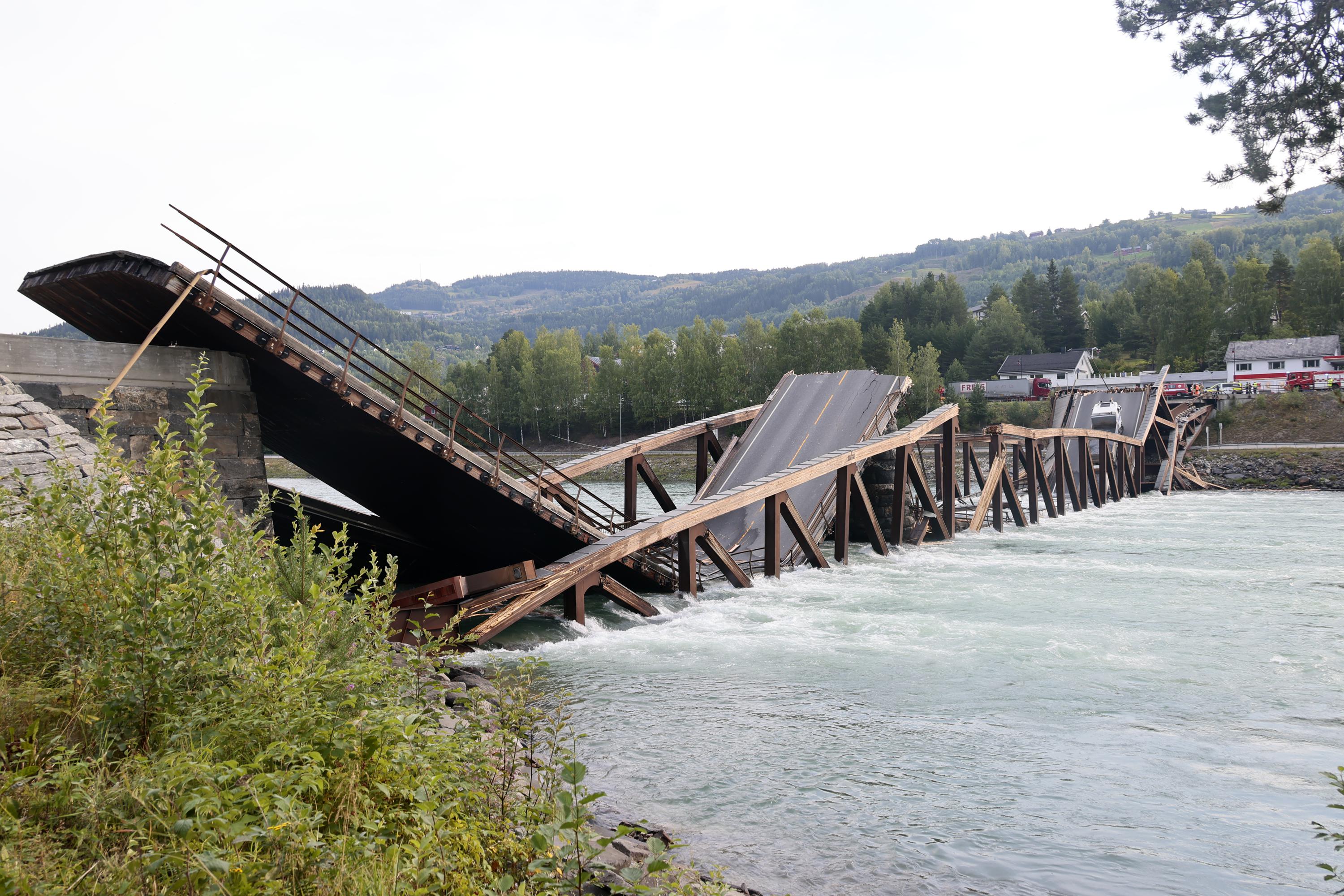 COPENHAGEN, Denmark (AP) — A wooden bridge over a river in southern Norway collapsed early Monday, drowning a car and trapping a truck in a raised section. The drivers of both the vehicles escaped unhurt, police said.

Shortly after 7:30 a.m. (0530 GMT; 1:30 a.m. EDT), police were alerted that the bridge had collapsed while a truck and a car were crossing it. The reason was not immediately known.

The car plunged into the river while the truck was standing almost vertically on a bridge.

A helicopter assisted in the rescue operation and pulled out the truck driver, police said. The driver of the car managed to get out of his vehicle on his own.

A nearly 150-meter-long (500-foot-long) bridge connects the west bank of the river Gudbrandslagen and the village of Tretten. The bridge was opened in 2012.

“It’s completely destroyed, everything has fallen down,” he added.

The Norwegian Automobile Federation said the bridge was inspected in 2021, raising concerns about the safety of such bridges.

“We who travel on the road must be able to trust that the bridges are safe to drive on,” the organization’s spokesperson, Ingun Handgaard, told Norwegian news agency NTB.

The Norwegian Public Roads Administration said on Monday it wanted to conduct an independent investigation into the collapse.

“Driving on Norwegian roads should be safe. That’s why it’s important to get to the bottom of this matter,” said Head of Administration Ingrid Dahl Hovland.

Atley Formo, who lives near Tretten Bridge, said he heard “a loud crash”.

“The whole house was shaking. I was wrapping the blinds in the bedroom and I looked at the bridge over the river,” he told Norwegian broadcaster TV2.

A similar bridge, made of glued laminated timber, collapsed in 2016 at Sjoa in the Gudbrand valley. The driver of the truck crossing the bridge was slightly injured when it collapsed.

After that collapse, 11 similar bridges, including one in Tretten, were temporarily closed by Norway’s government body in charge of infrastructure. The agency said in a 2016 collapse report that “the direct cause of the bridge collapse was faulty joints in the framework.”

Norwegian Transport Minister Jon-Ivar Nygaard was due to visit the site of the bridge collapse later on Monday.