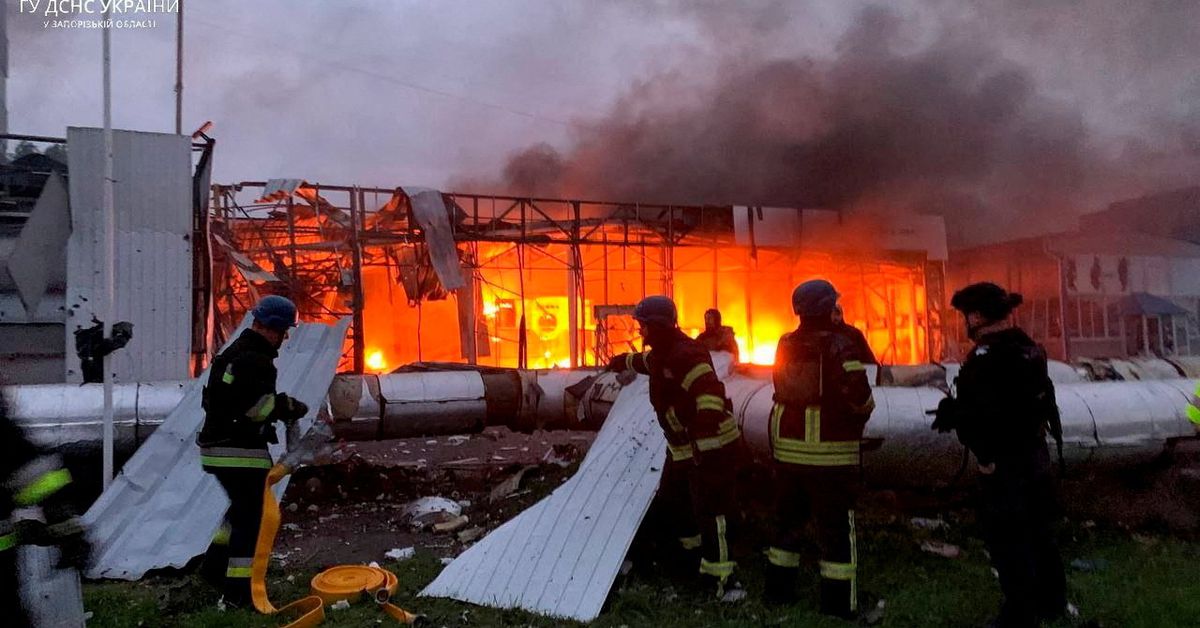 KYIV/BRUSSELS, Oct 12 (Reuters) – More than 50 countries will gather on the sidelines of a NATO meeting in Brussels on Wednesday to discuss strengthening Ukraine’s air defenses after Moscow launched its most intense missile attacks since the start of the war.

Russian attacks using more than 100 missiles have killed at least 26 people across Ukraine since Monday, when President Vladimir Putin launched what he called a retaliatory strike against Ukraine for a bridge explosion.

Air raid sirens sounded across Ukraine for a third day on Wednesday and there were reports of some gunfire, but there were no signs of a repeat of the intensive nationwide attacks of the previous two days.

The missiles have mostly targeted civilian electricity and heat infrastructure, while some have targeted busy roads, parks and tourist sites, including the center of Kyiv city.

The Ukraine Defense Contact Group, the countries set up by the United States to coordinate military aid to Kiev, was due to meet on Wednesday ahead of a two-day meeting of NATO defense ministers in Brussels.

NATO Secretary General Jens Stoltenberg said Russia’s missile attacks are a sign of weakness in a country that is likely to lose the war.

“Ukraine has momentum and continues to make significant gains, while Russia continues its horrific and indiscriminate attacks on civilians and critical infrastructure.”

EU energy ministers were also meeting in Prague to find ways to deal with the energy crisis caused by the war.

On Wednesday, Polish pipeline operator PERN said it had found a leak in a pipe in the Druzhba system that carries oil from Russia to Europe, but said the cause was likely an accident. Global attention has been focused on the security of Russian energy pipelines to Europe since a major undersea gas pipeline was damaged by suspected sabotage last month.

As his forces have lost ground on the battlefield since September, Putin has escalated the conflict, ordering the call-up of hundreds of thousands of reservists, announcing the annexation of occupied Ukrainian territory and repeatedly threatening to use nuclear weapons to defend Russia.

Firefighters work at the site of a car retailer’s office building destroyed by a Russian missile strike in Zaporizhia, Ukraine, on October 11, 2022. Press service of the State Emergency Service of Ukraine/handout via REUTERS

US President Joe Biden said on Wednesday that he doubts Putin will use nuclear weapons.

Putin is a “rational actor who has made a significant miscalculation”, Biden said in a CNN interview, adding that the Russian president wrongly expected his invading forces to be welcomed.

Asked how realistic he believed Putin would be to use tactical nuclear weapons, Biden replied: “Well, I don’t think he would.”

NATO’s Stoltenberg told reporters in Brussels on Tuesday that the military alliance had not changed Russia’s nuclear posture.

Blast in the South

In the latest reports from the battlefield, Ukraine’s military said its forces drove Russian forces from several settlements on the west bank of the Dnipro River, near the Russian-held city of Berislav in Kherson region.

The Ukrainians broke through the Russian front in the area in early October and are trying to cut off thousands of Russian troops from crossing the river to supply and escape routes.

Also to the south, Russian missiles destroyed buildings overnight in the Zaporizhia region, though no casualties were reported, regional governor Oleksandr Starukh said.

Video footage released by Ukrainian emergency services shows a family being rescued from the rubble of a flattened building in Zaporizhia after what it said was a missile strike. Reuters could not independently verify the location of the video or the date it was filmed.

Zaporizhia, Ukraine’s sixth largest city, is still under Ukrainian control, although Moscow claims to have annexed the entire surrounding region. The city has come under nighttime Russian attacks since the annexation announcement, including at least three apartment blocks destroyed while residents slept. Starukh said at least 70 people have been killed this month.

Air raid sirens sounded over Kiev for the third day in a row, even as residents cleaned up after the previous attack.

“It’s not like they’re fighting an army, they’re just motivated by the desire to destroy, destroy, destroy us,” Yulia Datsenko, a 38-year-old paramedic, said as she surveyed the damage in her apartment.