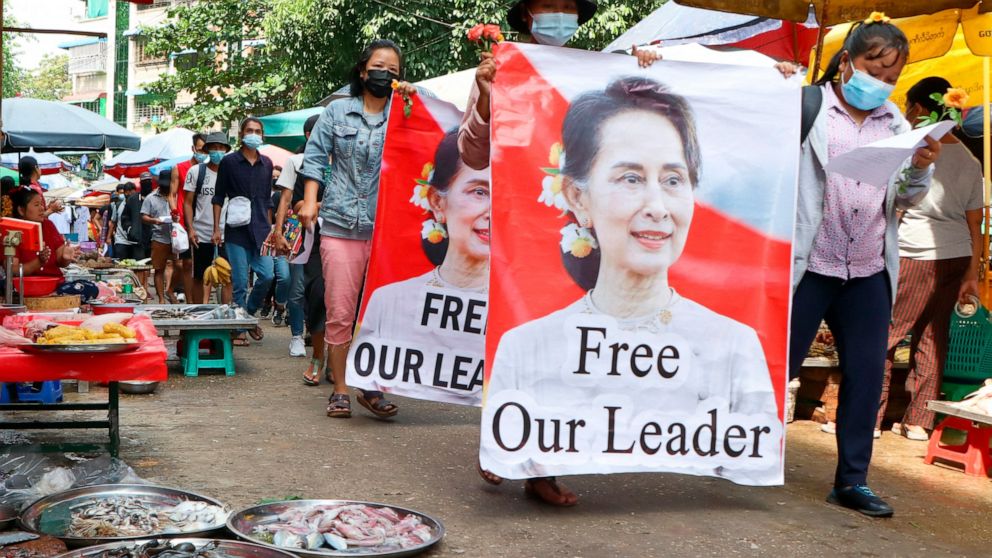 The trial was held behind closed doors with no access to the media or the public, and her lawyers were barred by a restraining order from disclosing information about the proceedings.

In four corruption cases decided Monday, Suu Kyi abused her position to rent public land at below market rates and build residences with donations for charitable purposes. She was sentenced to three years on each of the four counts, but three of those sentences will be served concurrently, giving her an additional six years in prison.

She has denied all charges and her lawyers are expected to appeal.

She was sentenced to 11 years in prison on treason, corruption and other charges in earlier trials after the military ousted her elected government and detained her in February 2021.

Analysts say the numerous allegations against her and her allies are an attempt to legitimize the military’s takeover and remove her from politics before the military seizes power. Election Promised for next year.

Suu Kyi and her co-defendants have denied all charges and their lawyers are expected to file an appeal in the coming days, said the legal official, who asked not to be identified because he was not authorized to release the information and feared retribution from authorities. .

Other key members of Suu Kyi’s National League for Democracy party and her government have also been arrested and jailed, and officials have suggested they may dissolve the party before the next election. The Assistance Association for Political Prisoners, a civil society organization, says more than 12,000 people are being held after being captured by security forces.

The military seized power and detained Suu Kyi on February 1, 2021, the day her party would have begun a second five-year term in office after a landslide victory in the November 2020 general election. The army said it took action because there was widespread voting fraud, but independent election observers found no major irregularities.

The military takeover sparked peaceful nationwide street protests that were broken up by security forces with lethal force, starting an armed resistance that some UN experts now recognize as a civil war. The military government has been accused of human rights abuses, including arbitrary arrests and killings, torture and military sweeps that have included airstrikes on civilians and the burning of entire villages.

Aid to Political Prisoners said it had verified that 2,191 pro-democracy activists and other civilians had been killed in the military crackdown, although the actual total is likely higher.

Suu Kyi, 77, has been opposing military rule in Myanmar for more than three decades. She was awarded the 1991 Nobel Peace Prize while under house arrest.

Although Myanmar’s most democratic period since the 1962 coup, her five years as head of a civilian government were marked by repression and military rule.

Suu Kyi has been charged with a total of 11 counts under the Anti-Corruption Act, each punishable by up to 15 years in prison and fines.

In Monday’s verdict, a legal official said Suu Kyi was sentenced to three years in prison for building herself a residence in Naypyitaw, allegedly with money donated to a charity named after her mother, which she chaired.

She was sentenced to three years for abusing her position to rent property in Yangon, the country’s largest city, for the same foundation, the official said.

Two other cases were decided on Monday involving parcels of land in Naypyitaw for which she abused her authority to rent below market rates for the foundation. She was sentenced to three years in each of those cases.

Three cases related to crimes in Naypyitaw are to be tried simultaneously.

The former mayor of Naypyitaw, Myo Aung, was a co-defendant in both cases involving permits to lease land. Yeh Min O, a former deputy mayor, is a co-defendant in one case, and Min Thu, a former member of the Nay Pyi Taw Development Committee. Each was sentenced to three years.

The Government’s Anti-Corruption Commission, which filed the case, alleged that the rental charges agreed by the Naypyitaw Development Committee were lower than the rate set by the Ministry of Planning and Finance, thereby depriving the state of revenue due to the rental agreement. should get

“I condemn Aung San Suu Kyi’s unjust sentence of an additional six years of detention and call on the government of #Myanmar to immediately and unconditionally release her and all political prisoners, and respect the will of the people.” he tweeted.