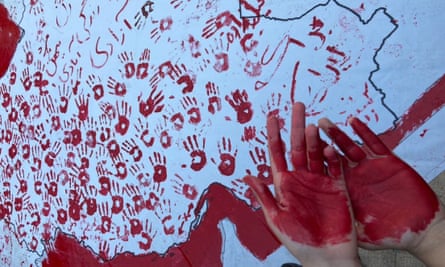 Another schoolgirl was reportedly killed by Iranian security services after she was beaten in class for refusing to sing a pro-government song when her school was raided last week, sparking further protests across the country this weekend.

When they refused, security forces beat the students, leading to several girls being taken to hospital and others arrested. On Friday, Panahi succumbed to his injuries at the school.

Iranian officials denied its security forces were responsible, and after her death sparked nationwide outrage, a man identified as her uncle appeared on state TV channels and claimed she died of a congenital heart defect.

Schoolgirls have emerged as a powerful force After videos of Iran’s top leaders waving their hijabs in the air and shouting anti-government slogans went viral Mahsa AminiThe 22-year-old woman died after being detained by Iran’s morality police in August for not wearing a hijab.

Iranian authorities responded last week by launching a series of raids on schools across the country, forcing officers into classrooms, violently arresting schoolgirls and pushing them into waiting cars, and firing tear gas into school buildings.

In a statement posted on Sunday, Iran’s teachers’ union condemned the “brutal and inhumane” raids and called for the resignation of Education Minister Youssef Nouri.

News of Panahi’s death has mobilized schoolgirls across the country to organize and join protests over the weekend.

Among them was 16-year-old Najneen*, whose parents kept her at home for fear she would be arrested for protesting at school.

“I am not allowed to go to school as my parents fear for my life. But what has changed? The regime continues to kill and arrest schoolgirls,” says Najneen.

“What good is it if I just sit at home angry? I and fellow students in Iran have decided to protest in the streets this week. Even if I have to hide from my parents now, I will.”

19-year-old Nergis* also joined the protest and was shot in the back and leg with rubber bullets. She says Panahi’s death motivated her and her friends to continue protesting despite the danger.

She says that’s what happened to Panahi – as well as the death of two other 17-year-old schoolgirls Nika Shahkarmi and 16 years old Sarina IsmailzadehBoth the arms of the Iranian security forces have united the youth of Iran under a common cause.

“I don’t have any relatives in Ardabil, but this brutal action against our sisters, who were only 16 years old, woke up the whole country,” she says.

“We never knew we were so united – in the Baloch region as well as the Kurdish regions. The world has heard of Nika, Sarina and Asara, but there are many other nameless children we know nothing about.

“It’s not just Asra’s death,” she says. “The Islamic Republic has been killing our people for 40 years, but our voices have not been heard. Let the world know that this is no longer a protest – we are calling for a revolution. Now that you are all listening to us, we will not stop.”

According to the latest report of Iran Human Rights As of October 17, 215 people, including 27 children, have been killed in nationwide protests.

*Names have been changed