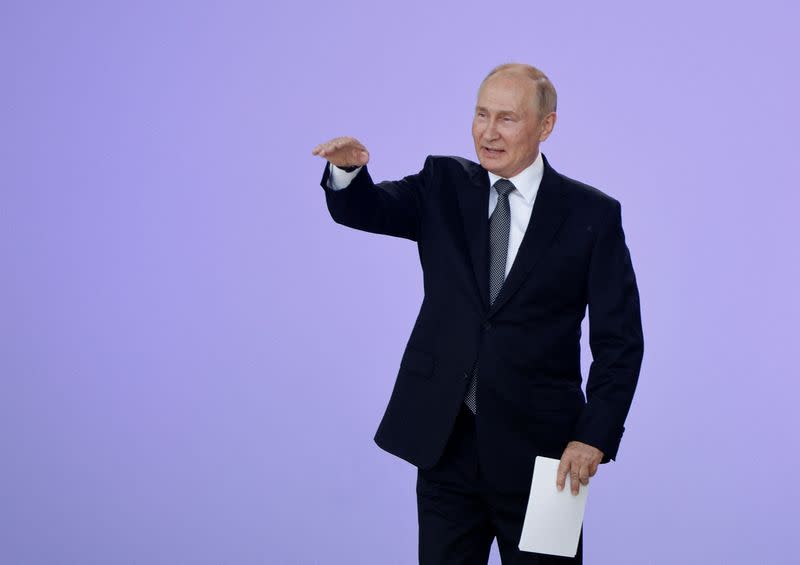 LONDON (Reuters) – President Vladimir Putin said on Monday that Moscow was ready to sell advanced weapons and cooperate in developing military technology to allies globally, nearly six months into the Ukraine war, in which its forces have fared worse than expected.

The war has so far not been a credible showcase for Russia’s arms industry, with the Russian leader’s forces withdrawing from Ukraine’s two largest cities and moving slowly, at great expense, to the east of the country.

But the Kremlin leader, addressing an arms exhibition outside Moscow, insisted the Russian arms race was years ahead.

Russia maintains its strong ties with Latin America, Asia and Africa, “and is ready to offer partners and allies the most modern types of weapons – from small arms to armored vehicles and artillery, fighter jets and unmanned aerial vehicles,” he said.

“Almost all of them have been used more than once in actual combat operations.”

He said that Russia can offer new models and systems – “we are talking about high-precision weapons and robotics, combat systems based on new physical principles.

“Many of them are years, or perhaps even decades, ahead of their foreign counterparts and significantly superior to them in terms of tactical and technical characteristics.”

Western military analysts have suggested that the poor performance of Russian forces and weapons in Ukraine could make Moscow’s arms exports less attractive to potential buyers such as India, which has relied heavily on its technology in the past.

Ukraine has made effective use of US-supplied weapons, particularly the HIMARS advanced rocket system, and Russia has taken several major blows, including last week’s destruction of an airbase on the Russian-annexed Crimean peninsula.

Nevertheless, Putin said that Russia and its proxy forces in the Donbass region of eastern Ukraine are completing all their tasks.

“Step by step they are liberating the land of Donbass,” he said.

The speech formed part of a series of statements following the February 24 attack in which Putin and his foreign minister, Sergei Lavrov, touted Russia’s ability to cooperate with allies such as China, India, Iran and others in building a new international. The order will no longer be dominated by the United States.

“I would like to emphasize that Russia stands for comprehensive development of military-technical cooperation. This is especially important today in the conditions of self-confidence in the emerging multipolar world,” Putin said.

“We greatly appreciate the fact that our country has many like-minded friends and partners on different continents. These are states that do not succumb to so-called hegemony, their leaders show real masculine character and do not bend.”