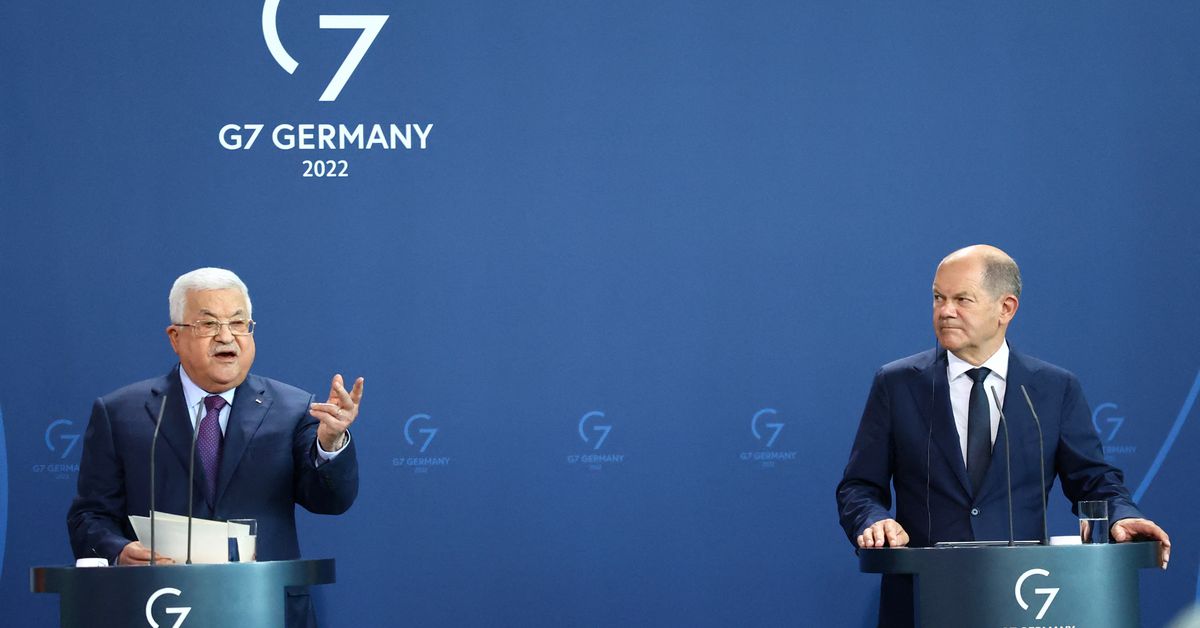 “For us especially Germans, any relativization of the singularity of the Holocaust is intolerable and unacceptable,” Scholz tweeted on Wednesday. “I am outraged by the insulting remarks made by Palestinian President Mahmoud Abbas.”

During a visit to Berlin on Tuesday, Abbas accused Israel of committing “50 holocausts” in response to a question about the upcoming 50th anniversary of the attack on the Israeli team at the Munich Olympics by Palestinian militants.

Lapid said on Twitter that Mahmoud Abbas standing on German soil and accusing Israel of committing ’50 holocausts’ is not only a moral affront but an egregious lie.

“History will never forgive him.”

In response to the storm of criticism, Abbas called Nazi Germany’s Holocaust, in which six million Jews were killed, “the most heinous crime in modern human history”.

He said his remarks were not meant to deny the singularity of the Holocaust, but to highlight “the crimes and genocide committed against the Palestinian people since the Naqba by the Israeli army”.

The Nakba, or catastrophe, is a term used by Palestinians to describe the mass exodus of Palestinians who fled or were driven from their homes during the 1948 war that coincided with the creation of the State of Israel.

The Central Council of Jews in Germany expressed “horror” at Abbas’s comments, which it said trampled the memory of six million Jews and stigmatized all Holocaust victims.

Standing alongside Scholz, Abbas cited a series of historical events in which Palestinian Israelis were killed during the 1948 war and in the years that followed.

“From 1947 until today, Israel has committed 50 massacres, 50 massacres, 50 holocausts in Palestinian villages and towns, in Deir Yassin, Tantura, Kafr Qasim and many other places,” Abbas said.

The official Palestinian news agency Wafa did not include Scholz’s Holocaust comments in its report on his visit, and the Palestinian Foreign Ministry said Lapid’s comments were intended to distract from Israel’s “crimes.”

In a statement, the ministry said Israel not only continued to crack down on Palestinians, but also sought to suppress comments that “remind Israel and the international community of the many crimes Israel has committed.”

Abbas’s comments followed months of tension this month and a brief conflict during which Israel said there was an imminent threat from the Islamic Jihad group, which fired more than 1,000 people in response, killing 49 people in Gaza. Rocket in response.

Dozens of Palestinians have also been killed in clashes with Israeli security forces in the occupied West Bank, while there have been several attacks on Israelis, including an incident on Sunday that injured eight people on a bus carrying Jewish worshipers to Jerusalem. Read on

The Palestinians are seeking an independent state in the territory captured by Israel in the 1967 Middle East war. Negotiations have been frozen since 2014.

Additional reporting by Ali Sawafta in Ramallah and Nidal al-Mughrabi in Gaza; Editing by Mark Heinrich