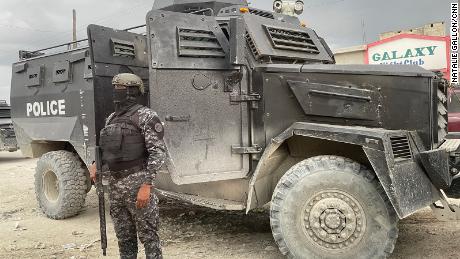 “Can you see where it came from?” SWAT members asked each other as they breathed into the armored vehicle. It provides only a small sliver of window onto the streets outside, which seem deserted one moment, with citizens trying to flee to safety the next.

In the past 72 hours, police have killed 400 Mawozo gang leaders and freed six hostages from him, he says. But one of the dozens of gangs terrorizing the capital – these streets have not been wiped out.

“Do you see that red sign ‘SMS’? That’s them,” the SWAT officer said, pointing to the position of the gunmen. Like his team, he did not want to be named citing security reasons. He pointed to a small shack along the road as dozens of people drifted down a side alley onto the street.

“Get away,” he told the crowd over the armored car’s loudspeaker. “You’re too exposed. It’s dangerous.”

The officer ordered the vehicle to move to a new position. “When we get to the scene, open up anything that moves,” he said. A heavy exchange of fire ensued between the police and the gang members.

It’s a common scene of injuries, shootings and terror in one of dozens of gang-controlled neighborhoods as Port-au-Prince appears to be descending into a full-blown war between police and increasingly well-equipped and organized crime groups.

And it’s a familiar routine: the police investigate gang areas to show their reach, and the gangs respond with intense volleys of bullets.

In the Cité Soleil area, Ten days of violence More than 470 people died, injured or went missing in July, according to the UN, as the G9 gang sought to expand its reach in the area by wresting territory from rival gangs.

Social media videos from the area show gangs using bulldozers covered with steel plates to demolish houses, presumably those of rivals, as armor. Other houses were burned, other videos showed dozens of locals fleeing on foot at night, at the height of the fighting.

Flies blanket the rain-soaked concrete floor of the Sporting Amphitheater stage, where babies as young as four months struggle to sleep, exposed to the elements. One has bruises from a fall, the other has painful and ugly rashes, but they are alive.

“Here I sleep in the box,” she said, pointing to the water. “They burned my house and shot my husband seven times,” she says, referring to gang members.

“I can’t afford to go see him [in hospital]. In this park, even if they bring some food, there is not enough for everyone. Children are dying.”

Others are missing. “I have four children, but my first one is missing and I can’t find him,” said another woman. “We have been completely abandoned by the state and have to pay even to use the toilet,” added another.

A young boy added: “My mother and father are dead. My aunt saved me. I want to go to school but it’s been cut off.”

Locals speak of a perfect storm of disasters — and warn that the country is on the verge of further social collapse.

What remains of the country’s emergency interim government, created last year after the assassination of President Jovenel Moise, has begun to crumble amid accusations of inaction. His successor, Prime Minister Ariel Henry, has promised to fight insecurity and hold new elections, but so far has shown little progress toward either goal.

Meanwhile, analysts have pegged inflation in the country at 30%. There is a shortage of gas and queues at stations. The UN has warned that the youngest children in areas where gang violence is active may be at risk of starvation, as their parents are unable to get food or go to work.

A Haitian security source speaking to CNN estimated that gangs control or influence three-quarters of the city.

Frantz Elbe, director general of the Haitian National Police, denied the assertion. “This is not a common problem in the metropolis,” he told CNN, declining to give a percentage.

Yet it is undeniable that important parts of the national infrastructure are now entirely in the hands of criminals. The city’s important port – Haiti’s main – is controlled by gangs, which dominate the streets outside. The main highway to the south of the country remains the same, meaning the fragile part of the country hit by an earthquake last year is effectively cut off from the capital. Gangs are also expanding their control to the east of the city, where Croix-des-Bouquets is located, and to the north, around Cite Soleil, observers said.

Kidnappings are rampant and indiscriminate — one of Haiti’s few thriving industries. Seventeen were American and Canadian missionaries Abduction He was released last year only after visiting an orphanage in Croix-des-Bouquets and paying a ransom to the 400 Mavozo gang.

Police, often with guns, are doing what they can, Elbe tells CNN.

“The way gangs fight is changing. Earlier it was with knives and now with big weapons. The police need to be equipped. With what little we have, we will do whatever we can to fight the gang. Members,” he said.

The challenge they face is revealed by a small checkpoint set up in Croix-des-Bouquets, where gangs have dragged trucks down the main road and burned them.

Police bring in armored military bulldozers to push the debris to the side of the road, which is already littered with the carcasses of other trucks. The bulldozer operator, asked if he works under fire, replies: “Often.”

SWAT police set up a perimeter by scanning nearby rooftops. Locals and the vehicles they are traveling in are stopped and checked. One man says the situation is “bad, very bad” before another man gives him a stern look.

He suddenly changes tone: “We don’t know anything.”

Fear is the currency of this war, though it’s unclear if he’s afraid to talk to the press or the police or what the gang might learn later.

However, more tolerance is required to overcome this fear. A short boat ride from the mainland is the island of La Gonave, a hub for human traffickers.

The lackluster tempo and blue waters of a small inlet on La Gonave reflect its poverty. Heat, waste, hunger and the business of giving up dominate the world.

One, a smuggler who introduced himself as Johnny, calmly explained how his business was run.

The journey for the boat is often one-way, so each attempt costs about US $10,000 to buy a boat, he says. To cover those costs, Johnny needs at least a couple of hundred customers, who will be stuck in his battered hull.

Pieces of mesh appear to bridge any gaps in the hull, and loose wooden planks form the interior of the boat. Johnny shows where the pumps and motors will eventually go.

He added that he hoped to pack his boat with 250 passengers, as he considered it to be in “good” condition.

The final destination is the United States, with occasional stops along the way including Cuba and the Turks and Caicos Islands.

And it is from these three locations that the International Organization for Migration has reported a rising number of forced returns of Haitians in the first seven months of this year, 20,016 so far in 2021 compared to 19,629.

Some Haitians appear to be nearing the end of the journey, with the US Coast Guard interdicting 6,114 Haitians between October and late June — four times the number from October 2020 to October 2021. Just last weekend, More than 330 immigrants The US Coast Guard rescued Haiti near the Florida Keys.

The numbers are staggering as are the risks. Previous voyages from this inlet have ended in tragedy. Johnny is vague about the time of the last boat, but precise about the potential loss: a recent trip he organized killed 29 people.

“There was a problem with the boat’s engine,” he said. “Water came inside the boat. We called for help, but it took too long. The boat was sinking while I was trying to save people. By the time help came, it was too late.”

While CNN could not independently confirm Johnny’s account of the system, two other locals who said they were involved in smuggling separately described similar details. Officials from neighboring Caribbean nations Bahamas And Turks and Caicos There have been frequent reports of the remains of migrants being found after boats sank in their waters.

Despite the risks, many Haitians are still desperate for a way out. Locals on La Gonave told CNN that at least 40 people attempting the boat trip were already on the island and that the rest would arrive on the mainland after Johnny said the boat was ready.

One prospective traveler, a university graduate who was once a teacher, described why he risked everything to travel.

“I worked as a teacher, but it didn’t help. Now I ride a motorcycle in the sun and dust every day. How can I take care of my family when I have it?”

He said he saved a year’s worth of money to travel and was not afraid of the rough conditions of the boat. “I can get eaten by a shark or go to America.”