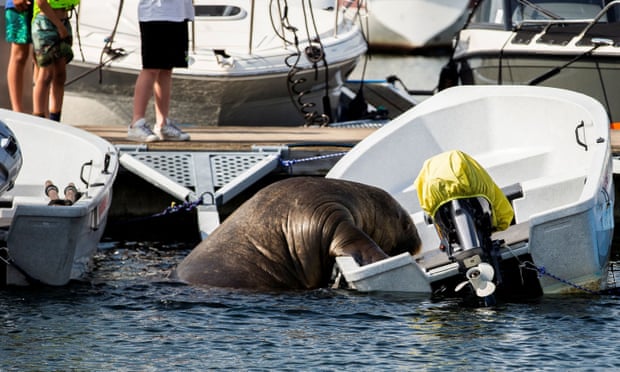 Norwegian authorities say they are considering putting down a walrus that won hearts by basking in the sun in an Oslo fjord, because of the danger to the public and the spectators themselves.

Despite repeated appeals to the public to keep their distance from the walrus – a 600kg (1,300 pound) young female nicknamed Freya – the mammal continues to attract large crowds, the fisheries directorate said.

It released a photo of a group of onlookers crowding the animal. “Reckless behavior by the public and non-compliance with authorities’ recommendations can put lives at risk,” said Nadia Jadaini, spokeswoman for the Fisheries Institute.

“We are now looking for other solutions and euthanasia may be a real option.”

Freya, named after the Norse goddess of beauty and love, has been making headlines since July 17 when she was first spotted in the waters of the Norwegian capital.

Walruses generally live in latitudes north of the Arctic.

During long naps – a walrus can sleep up to 20 hours a day – Freya has been depicted chasing ducks, attacking swans and, often, sleeping on boats struggling to support her bulk.

Images of her boarding cruise ships have flooded Twitter with adoration. As one marine biologist said in a video about Freya: “Seeing a walrus on land is like seeing a cow tucked into a sleeping bag.”

Concerned that the celebrity walrus could die, some have urged the public to heed the advice of authorities and leave Freya alone so she can live.

Despite the recommendations, some curious onlookers continued to approach her, sometimes with children, to take photographs.

“Her health has clearly deteriorated,” Jadaini said. “The walrus is not getting enough rest and the experts we have consulted now suspect that the animal is stressed.”

They don’t usually attack people but may do so if they feel threatened, according to officials.