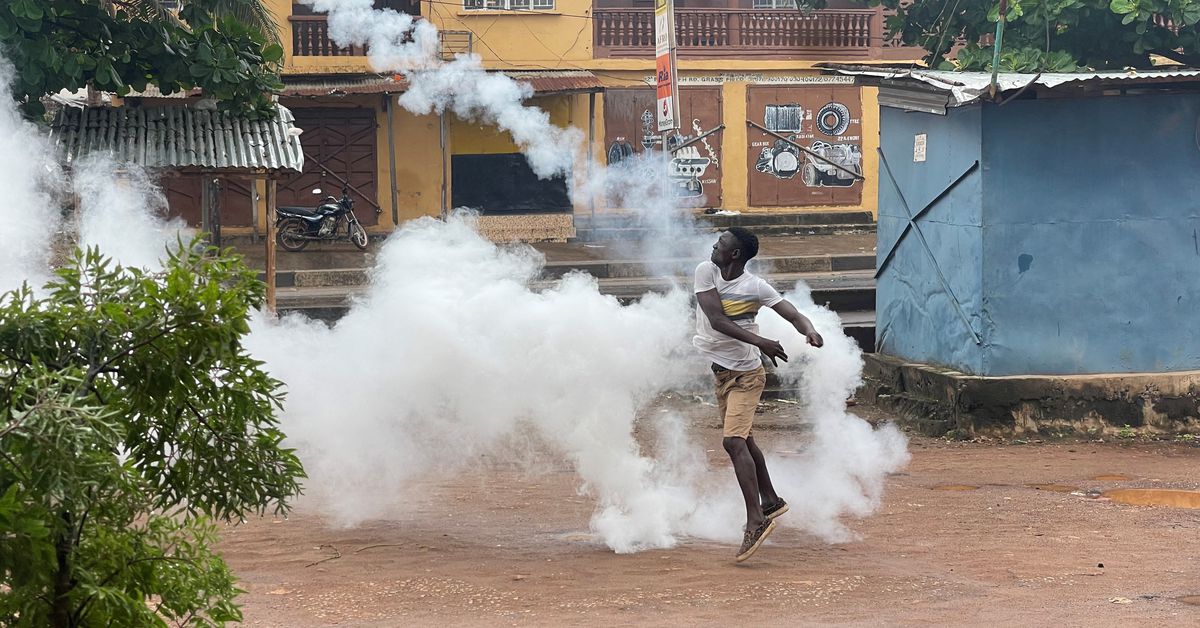 In this picture obtained from social media, a protester throws a gas can during an anti-government protest in Freetown, Sierra Leone on August 10, 2022. Picture obtained by Reuters/REUTERS

FREETOWN, Aug 11 (Reuters) – Dozens of people died in anti-government protests in Sierra Leone, police and other sources said on Thursday, with the death toll rising sharply from clashes the previous day as shocked citizens mostly stayed behind closed doors in the capital Freetown.

Six police officers and at least 21 civilians were killed, sources said, as hundreds of people took to the streets, frustrated by financial constraints and the government’s failure to mitigate the impact of rising prices.

The unrest is highly unusual for Sierra Leone, especially in the West African country’s capital, Freetown. A few people have been killed in isolated protests in other cities in recent years.

A video verified by Reuters in Freetown shows a police officer firing a gun into the crowd.

Suleiman Ture, 19, who lives in East Freetown, walked for a short time before police opened fire with tear gas and then saw protesters being shot from his porch.

“I think people are shocked. This is not the country we know. Sierra Leone is a peaceful place,” he told Reuters.

Other verified images from Freetown showed clouds of smoke and tear gas as large crowds threw stones and burned tires as armed officers patrolled the streets.

Protests were concentrated in the opposition’s northern heartland and the capital.

Long held back, rising prices for basic goods have fueled citizen frustration in a country where more than half of the nearly 8 million people live below the poverty line, according to the World Bank.

At least 13 civilians were shot dead in Freetown, officials at the city’s main mortuary said. Four civilians died in Kamkawi and another four in Makeni, hospital sources said.

An eerie calm returned to Freetown on Thursday, residents said, with stores closed and people living in fear of unrest.

Internet was cut for two hours on Wednesday and again overnight, according to Internet Observatory NetBlocks.

Police said the curfew will remain in effect from 7pm to 7am local time from Thursday after the government imposed a curfew at 3pm on Wednesday to prevent violence.