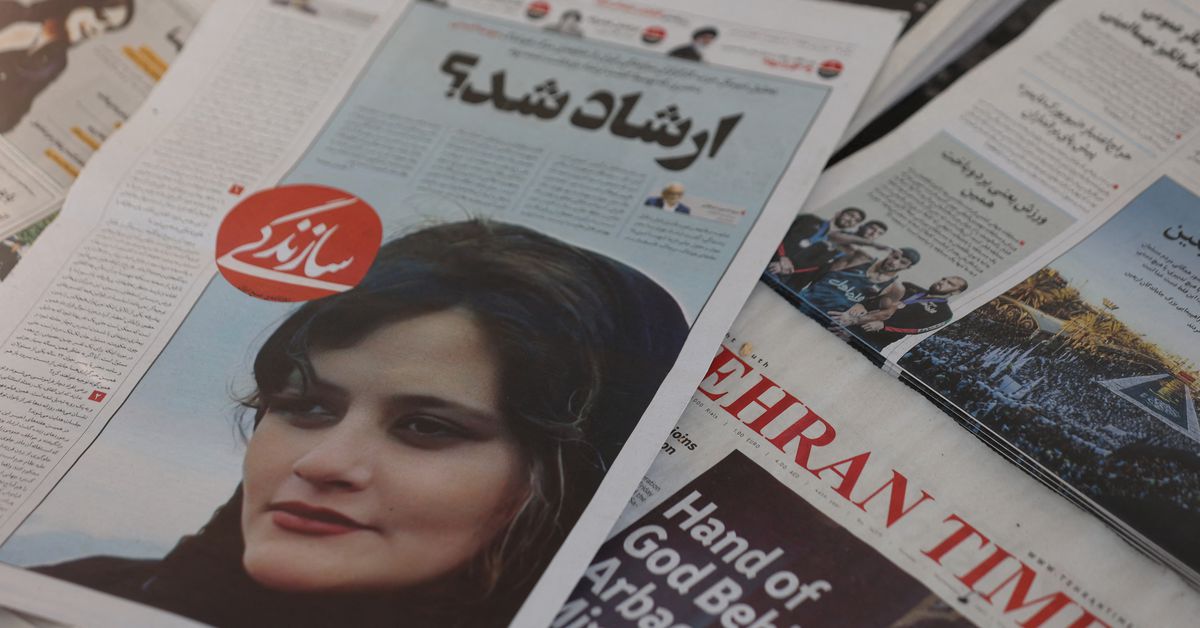 DUBAI, Sept 19 (Reuters) – Five people were killed in Iran’s Kurdish region on Monday when security forces opened fire to protest the death of a woman in police custody, a Kurdish rights group said, in a third day of unrest over the incident. Due to this, there has been a wave of anger across the country.

Mahsa Amini, 22, from Iran’s Kurdistan province, fell into a coma and died last week after being arrested by morality police in Tehran, sparking protests in numerous areas, including the capital. Read on

It said two more were killed in the town of Diwandarreh by “direct fire” from security forces, and a fifth was killed in Dehgolan in the Kurdish region.

Reuters could not independently verify the reports.

The death has not been officially confirmed. The official news agency IRNA said there were “limited” protests in several cities in seven provinces that were dispersed by police.

State TV said several protesters were arrested but denied “some claims of death on social media” by showing two wounded youths who denied reports they had been killed.

Police said Amini fell ill while waiting with other women in the custody of morality police, who have enforced strict rules in the Islamic republic requiring women to cover their hair and wear loose clothing in public.

But her father has repeatedly said that his daughter has no health problems and that she has injuries on her leg. He blamed the police for her death.

The protests have been most intense in the Kurdish region, where authorities have previously blamed the unrest on the 8 million to 10 million Kurdish minority.

Hengw said that 75 people were injured on Monday.

In a video earlier posted on Twitter by Hengaw, protesters are seen throwing stones while a man is heard saying “there is war in Diwandarreh” and accusing the police of attacking them.

Reuters could not verify the authenticity of the video.

Internet blockage observatory NetBlocks reported a “near-total disruption of internet connectivity in Sanandaj” – the provincial capital of the Kurdish region – on Monday, according to its Twitter account, linking it to the protests.

A newspaper with the front page of Mahsa Amini, a woman who died after being arrested by the Islamic Republic’s “morality police”, is seen on September 18, 2022 in Tehran, Iran. By Majid Asgaripour/WANA (West Asia News Agency) REUTERS

While Hengaw reported lethal force by security forces in the Kurdish region, there were no reports of deaths in protests in other parts of Iran.

Videos on social media showed protests in Tehran and spread to cities such as Rasht, Mashhad and Isfahan.

A video shared by the 1500tasvir Twitter account, which published the footage sent by 70,000 followers, showed police cars in Tehran with their windows smashed, as a nearby security force vehicle fired water cannons at protesters.

“Stone pelters have come forward against the police. Hang the dictator!” A woman is heard saying.

They also shared footage showing a protest against the paramilitary Basij, a militia, at Tehran University.

Reuters could not independently verify the video.

The US demanded responsibility for Amini’s death.

“The death of Mahsa Amini after injuries sustained while in police custody for wearing an ‘improper’ hijab is an appalling and serious violation of human rights,” a White House spokesman said. Read on

France condemned her arrest, “and the violence that led to her death”, the foreign ministry said, calling for a transparent investigation.

Earlier on Monday, Tehran police commander Hossein Rahimi said that while police had been “accused of cowardice”, Amini was not physically harmed and police had “done everything” to keep her alive.

“This incident was unfortunate for us and we wish to never witness such incidents,” Rahimi said.

Police have released closed-circuit television footage that supports their version of events. Reuters could not verify the video.

Violators of Iran’s Sharia, or Islamic law, and hijab rules face fines or imprisonment. But activists have recently called on women to remove the veil despite a crackdown by tough rulers against “immoral behaviour”. Read on

Iran’s elite Revolutionary Guards have wreaked havoc in Kurdish areas of the country for decades, and many Kurdish activists have been sentenced to long prison terms or death sentences in recent years.