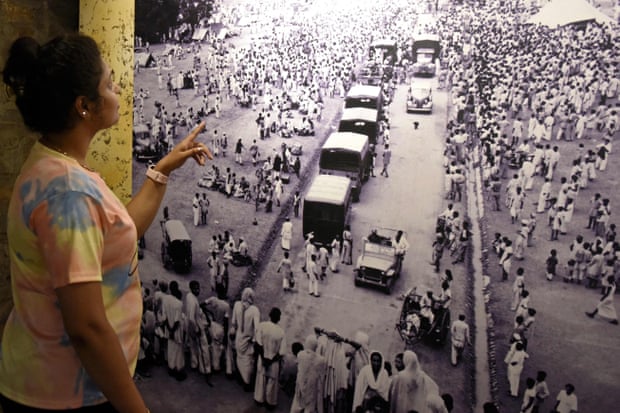 it was an embrace that contained 74 years of pain and longing. As Sikka Khan, 75, fell into the arms of his elder brother Sadiq Khan, now in his 80s, the pair wept with grief and joy at the same time. It had been more than seven decades since these brothers, separated by the horrors of Partition, saw each other. In India with Sikka and Sadiq Pakistan, neither of them knew if the other was alive. Yet neither had stopped watching.

But on a crisp January afternoon this year, the pair reunited at the border that had so devastatingly fractured their family. “Finally, we’re together,” Sadiq told his brother, tears streaming down his face.

75 years ago, on August 15, 1947, the subcontinent was partitioned on religious lines to become two independent countries. India and Pakistan. It was going to be a bloody and bitter split. After 300 years of official British presence, the leading figure of Indian independence, Mahatma Gandhi, and his protégé and future Prime Minister Jawaharlal Nehru envisioned a single, secular country. Muslim political leader Muhammad Ali Jinnah, however, feared the consequences of a Hindu-majority India and argued for a separate state for Muslims.

As religious tensions rose, deadly riots broke out, targeting Hindus, then Muslims, and then Sikhs. The British, eager to quickly extricate themselves from India, observed a raw border dividing the Indian states of Punjab in the west and Bengal in the east, angering all communities.

This provoked mutual genocide on both sides of the new border. Whole villages were burned, children were killed and an estimated 75,000 women were raped. In Punjab, the epicenter of the violence, babies were cut from the bellies of pregnant women and trains full of refugees – Muslims fleeing Indian Punjab, Sikhs and Hindus fleeing West Pakistan – were attacked and arrived at stations full of silent, bleeding corpses.

The actual death toll is still unknown, with estimates ranging from 200,000 to 2 million, and more than 14 million people fled their homes in the largest forced migration in history. From then on, India and Pakistan became enemies, divided by a border that would become increasingly separate and impenetrable for decades to come.

Caught up in chaos and brutality, families were forced to leave everything behind, and many were separated as they moved to India or Pakistan. Although many later tried desperately to find each other through newspaper advertisements, letters and messages on noticeboards, cross-border communication was limited. Visa restrictions and a deep-rooted fear of “the other side” also prevent most from returning to the border.

But recently social media has opened up a new realm of possibilities. Facebook pages and YouTube channels, some with thousands of members from India and Pakistan, have begun reconnecting people with homes and family members lost to partition and the resulting conflict that divided Kashmir.

Video accounts and pieces of information are posted on pages: photo or description of name, village or house. Since posts are widely shared by people on both sides of the border and the diaspora around the world, they sometimes come to the fore. While getting a visa to cross the border is still a challenge, video calls have been arranged so people can see homes and villages they left behind long ago.

Author Anchal Malhotra, who has spent years documenting the oral history of Partition, says, “People who lived through Partition have a very strong longing for their origins.

“The most common thing I heard in my research was ‘When I close my eyes I see my home’ or ‘Every night in my dreams I cross the border.’ Most people have resigned themselves to the fact that they will never see their homes again. But the great power of social media is that it is borderless and it is beautiful to see the way it is being used in India, in Pakistan, in Bangladesh, to connect people with a past that they thought they had lost.”

Makhu Devi, 87, who lives in Indian-controlled Kashmir, said she has been given new life after a Facebook group recently connected her with relatives in her old village, now in Pakistan, from whom she was forced to flee. . They now have regular phone calls, although the first few times they didn’t talk because everyone was crying so much. “My memory was fresh,” Devi said of the calls. “I am taken back to that time. I feel as young and energetic as I was then.”

Second and third generations have also embraced social media groups to connect with a race that is not discussed within families amid the wider culture of silence surrounding partition. It has also opened up lines of cross-border communication in innovative ways Through dating apps. It’s become common on Instagram for people to search hashtags of towns or villages where grandparents came from to see what they look like now and find people who still live there.

Punjabi Lehr, a YouTube channel founded by Nasir Dhillon, 38, a real estate dealer from Faisalabad Punjab, Pakistan, has made nearly 800 videos helping people reconnect with a person or place lost during Partition. According to his estimate, 300 people have personally reunited loved ones separated by the India-Pakistan border.

Dhillon grew up hearing his family and village elders talk wistfully about villages they could no longer visit, and began using social media to share their stories and gather information. But after his posts and videos started going viral, “the response was so overwhelming that I realized this is the story of the entire Punjab”.

“Everything I am doing is because of my roots,” said Dhillon. “We may be living in two hostile countries, but our hearts are still in the pre-Partition era. I pray that this kind of division does not happen anywhere in the world – it is a cruel thing.”

His biggest regret is not being able to take his father, who died in 2018, to his ancestral family shrine in India, which he eventually managed to locate thanks to social media. “Till his last days he wanted to see his hometown,” said Dhillon. He still hasn’t been visited; Last year, India rejected his visa application.

Due to Dhillon’s channel, the Khan brothers met each other again. Sikka, who was born into a Muslim family in what is now Indian Punjab, was just six months old when the partition violence broke out. Away from home with his mother, he was forced to seek refuge with a local Sikh family who were protecting their Muslim neighbors from the massacre.

Weeks after the massacre, it was revealed, but to gruesome scenes. A nearby river was so full of corpses that it was red with blood. And in Jagraon, a village of Sikka, 40 miles away, there was not a single Muslim left; There is no address for Sikka’s father, his 10-year-old brother or his eight-year-old sister. Overcome with grief, Sikka’s mother drowned herself. Sikka had no family apart from a no-nonsense uncle and was brought up by a Sikh family in his mother’s village.

He spent his entire adult life searching for news about his family, especially his beloved brother Sadiq. He made speculative calls and wrote hundreds of letters to obscure addresses in Pakistan, to no avail. He never married; With no family around him, he said, “something was always missing so it never felt right”.

In 2019, a relative sent a YouTube video of a Punjabi Lehar to a friend in the village by chance. In it, an old man in his 80s living in Pakistan said he was trying to find a younger brother he lost after fleeing Jagrao village during Partition. After contacting Dhillon, it was confirmed: the man was Sadiq Khan.

An emotional video call was organized between the two brothers and soon they were talking to each other on a daily basis. Sikka finally learns about his family; His father was killed in a communal attack and his brother and sister fled to a refugee camp on the border where his sister died of an illness. Sadiq moved to Pakistan, settled in Faisalabad and had six children and several grandchildren, but not a day goes by when he doesn’t think of his lost brother.

Visa issues and the Covid pandemic prevented the brothers from meeting for nearly three years, but in January, a reunion was finally held at the Kartarpur Corridor, a religious pilgrimage site recently opened to Indians and Pakistanis. “I felt complete,” Sikka said of the encounter. Both brothers agreed: they lived long enough so that they could meet again.

In April, Sikka was granted a visa to stay in Pakistan for three months, after which Sadiq returned to India with him for two months. Hope they meet each other soon; Sadiq keeps teasing Sikka that he will finally get a wife if he returns to Pakistan.

“Now I am not worried about anything,” said Sikka. “I just want to see my brother and be close to him.” But, Sikka added, he too was furious. “Why did they divide this country, why did they divide my family? There are still many people who have not been able to find their families or get visas to cross the border. I was lucky.”