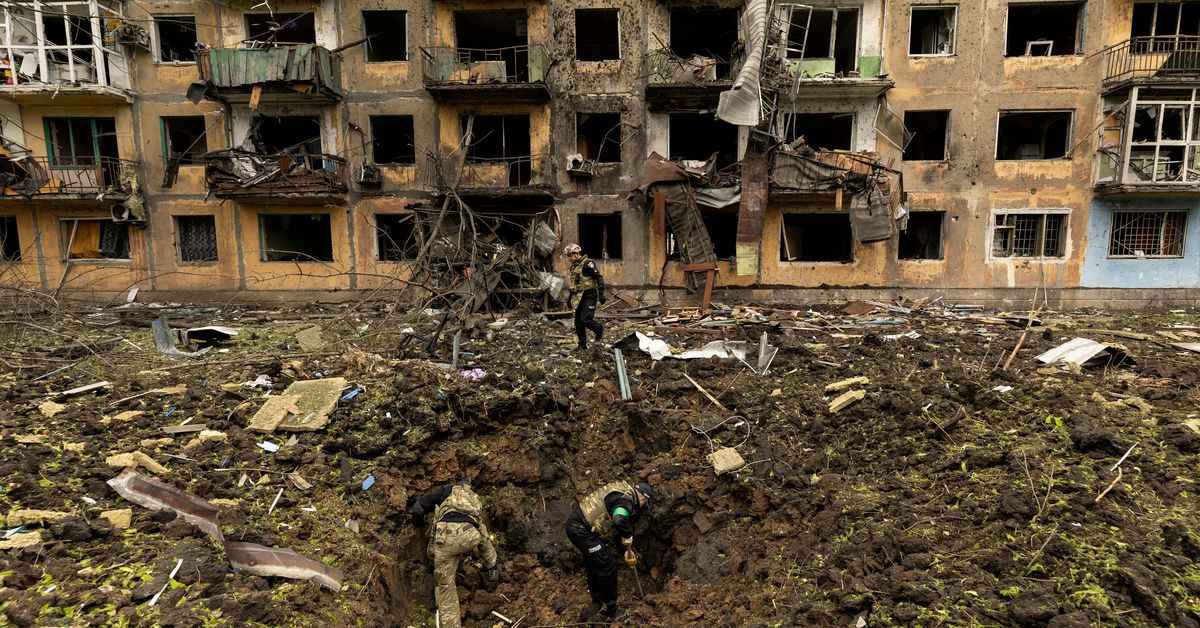 LONDON, Aug 8 (Reuters) – More than 450 foreign-made components have been found among Russian weapons seized in Ukraine, evidence that Moscow had borrowed important technology from companies in the United States, Europe and Asia in the years before the invasion. A new report by the Royal United Services Institute Defense Think Tank.

Since the start of the war five months ago, Ukrainian forces have seized or recovered intact or partially damaged Russian weapons from the battlefield. According to research shared with Reuters, 27 of these weapons and military systems, ranging from cruise missiles to air defense systems, were found to rely primarily on Western components.

This is the most detailed assessment published to date of the role played by Western actors in Russia’s war against Ukraine.

Other components came from companies in countries including Japan, South Korea, Britain, Germany, Switzerland and the Netherlands.

“Thousands of Ukrainians have been killed by Russian weapons that are heavily dependent on Western electronics,” Jack Watling, a land warfare specialist at RUSI, told Reuters.

With many foreign components found in everyday household items such as microwaves that are not subject to export controls, RUSI said that strengthening export restrictions and enforcement could make it difficult for Russia to replenish weapons such as cruise missiles.

In one case, a Russian 9M727 cruise missile, one of the country’s most advanced weapons that can maneuver at low altitudes to evade radar and strike targets hundreds of miles away, has 31 foreign components. The parts were manufactured by US-based Texas Instruments Inc and Advanced Micro Devices Inc.(AMD.O) Also Cypress Semiconductor, which is now owned by Infineon AG(IFXGn.DE) A German company, RUSI, was found in the investigation.

In another case, the Russian Kh-101 cruise missile, which has been used to attack Ukrainian cities, including the capital Kiev, also had 31 foreign components, including parts manufactured by companies such as US-based Intel Corporation and AMD-owned Xilinx.

In response to questions about how their chips ended up in Russian weapons, the companies said they comply with trade sanctions and have stopped selling components to Russia.

Analog Devices said the company has closed its business in Russia and instructed distributors to stop shipments to the country.

Texas Instruments said it complies with all laws in the countries it operates in and that the parts found in the Russian weapons were designed for commercial production. Intel said it “does not support or tolerate the use of our products to violate human rights.”

Infineon said it was “deeply concerned” if its products were being used for purposes for which they were not designed. AMD said it strictly complies with all global export control laws.

Many of the foreign components cost only a few dollars, and Russian companies could have purchased them online through domestic or international distributors before the start of the Ukraine invasion because they could be used in non-military applications.

However, since at least 2014 more than 80 Western-produced microchips have been subject to US export controls that would require a license to ship them to Russia, RUSI said. According to RUSI, companies exporting parts had a responsibility to carry out due diligence to ensure they were not sent to the Russian military or for military end-use.

The investigation’s findings show how Russia’s military relies on foreign microchips for everything from tactical radios to drones and precision long-range munitions, and that Western governments were especially slow to limit Russia’s access to the technology after President Vladimir Putin invaded Crimea in 2014.

Russia’s war with Ukraine, which began on February 24, has killed thousands, displaced millions and destroyed many cities. Russia’s superior firepower, including the use of cruise and ballistic missiles, has helped its forces grind through eastern Ukraine and capture about a fifth of the country.

According to the staff of the National Security and Defense Council, the Russian military fired more than 3,650 missiles and guided rockets in the first five months of the war. These include 9M727 and Kh-101 missiles. Russian missiles have been used to strike targets including rail lines to disrupt western supply routes, military infrastructure, and civilian targets such as shopping centers and hospitals. Russia said it only fired at military targets. Russian officials had no further comment for this story.

After the invasion of Ukraine, the US announced sweeping sanctions to try to weaken Russia’s economy and its military. It included a ban on several sensitive microchips being sold to Russia. Countries in Europe, as well as Japan, Taiwan and South Korea – all major chipmaking countries – have announced similar restrictions. Russia characterizes the conflict as a special military operation to disarm Ukraine. Moscow has cast the sanctions as countermeasures and denied targeting civilians.

According to RUSI, Russia is currently working to find new ways to secure access to Western microchips. Many of the components are sold through distributors in Asia, such as Hong Kong, which act as gateways for electronics that reach the Russian military or companies acting on its behalf, RUSI found.

The Russian government did not respond to a request for comment.

The US government said in March that Russian companies are the leading companies buying electronics for Russia’s military. Russian customs records show that in March last year a company imported $600,000 worth of electronics manufactured by Texas Instruments through a Hong Kong distributor, RUSI said. Seven months later, the same company imported another $1.1 million worth of microelectronics made by Xilinx, RUSI said.

Texas Instruments and AMD-owned Xilinx did not respond to requests for comment about the customs data.

Russia’s military could be permanently weakened if Western governments tighten export controls, shut down the country’s secret procurement network and prevent the creation of sensitive elements in states that support Russia, RUSI said.