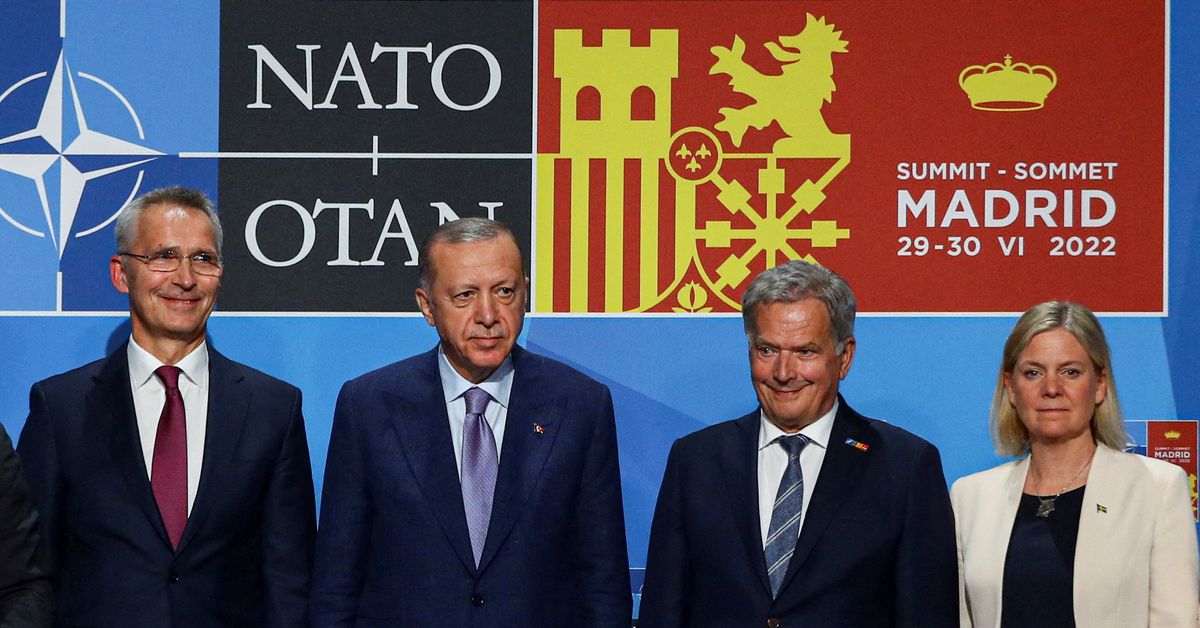 ISTANBUL, Oct 21 (Reuters) – Sweden has taken “concrete steps” to address Turkey’s concerns about its NATO membership bid, including stepping up counter-terrorism efforts against Kurdish militants, Stockholm said in a letter to Ankara on Oct. 6 and seen by Reuters. .

The two-page letter gives 14 examples of steps Sweden has taken to show it is “fully committed to implementation”. Signed the statement Along with Turkey and Finland in June, NATO member Turkey lifted its veto of their applications for the Trans-Atlantic Security Alliance as a result.

Sweden and Finland launched their bids to join NATO in May in response to Russia’s invasion of Ukraine, but were met with objections from Turkey, which accused the two Nordic countries of harboring the banned Kurdistan Workers’ Party (PKK) and other terrorists. group

Stockholm and Helsinki have denied harboring terrorists but have pledged to cooperate with Ankara in solving its security problems and lifting arms embargoes. Yet Turkish President Tayyip Erdogan said as recently as October 6 that his demands have not yet been met.

In a letter to Turkey, Sweden said that “concrete action has been taken on all the main elements of the tripartite agreement”.

Sweden’s security and counter-terrorism police, Sapo, has “intensified its work against the PKK”, and made a “high-level visit” to Turkey in September to meet with Turkey’s MIT intelligence agency, the letter said.

Sweden’s foreign ministry and the communications arm of Erdogan’s office each did not immediately respond to requests for comment on the letter.

Swedish officials gave the letter to Erdogan’s office and the foreign ministry over the weekend, which was previously unreported, said a source familiar with the situation, who asked not to be named because of sensitivity.

The letter was meant to reassure Turkey of Sweden’s efforts during ongoing bilateral talks and encourage final approval of the NATO membership bid, the source said.

According to the letter, Swedish officials “conducted a new analysis of the threat to Sweden’s national security and the PKK’s role in organized crime (and) this is likely to have concrete consequences.”

The PKK, which took up arms against the Turkish state in 1984, is considered a terrorist group by Turkey, the European Union and the United States. As part of talks on the June memorandum, Turkey has demanded the extradition of 73 people from Sweden and dozens from Finland, where he is linked to other groups.

The letter said Stockholm extradited a Turkish citizen on August 31 at Ankara’s request following the August 11 decision, and a total of four have been extradited to Turkey since 2019.

According to the letter, the extradition was discussed by a Swedish delegation that visited Ankara in early October.

“Sweden is committed to promptly and thoroughly resolving… pending extradition requests for terrorist suspects, taking into account Turkish intelligence and in accordance with Swedish law and the European Convention on Extradition,” the letter said.

“Turkey will continue consultations with Sweden and Finland to fully implement the memorandum,” Turkish diplomatic sources told Reuters. However, “steps must be taken to combat terrorism, prevent and punish incitement to terrorism, improve security and judicial cooperation,” the sources said.

The parliaments of all 30 North Atlantic Treaty Organization (NATO) member states must approve Sweden’s and Finland’s bids, which would mark a historic expansion of the alliance as the war in Ukraine continues.

In a sign that talks are progressing, Sweden’s foreign minister said on Friday that the last two holdouts, Turkey and Hungary, are expected to vote on their NATO applications soon.

Newly appointed Swedish Prime Minister Ulf Kristerson supports the fight against terrorism and will meet to discuss the NATO bid and extradition, Turkish broadcasters quoted Erdogan as saying on Friday.

A day earlier, Christensen said after meeting with NATO’s secretary general that his government would “redouble efforts to implement the tripartite memorandum with Finland and Turkey”.