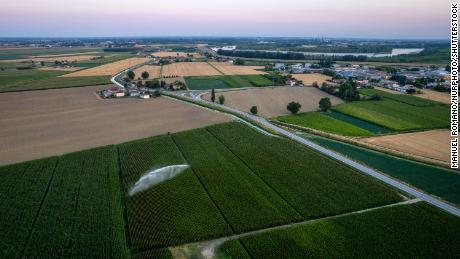 Firefighters from Greece and Sweden will arrive in France on Thursday, while other European Union governments, including Germany, Poland, Austria and Romania, are also pooling resources to help France fight the forest fires, the French government announced.

“Today, we are fully benefiting from European unity,” Bourne told reporters during a visit to the town of Hostens, the epicenter of the fires in southwestern France’s Gironde region. More than half of this year’s fires have occurred in the Gironde.

A total of four planes from Greece and Sweden are expected to arrive in France today, along with 64 people and 24 vehicles from Germany, according to the Elysee Palace.

The Gironde fire has burned more than 6,800 hectares of forest and nearly 1,100 firefighters are on the way. As of Thursday morning, 10,000 people have been evacuated from the area, according to regional authorities.

“Conditions are particularly difficult: trees and soil are particularly dry for more than a month without rain. Scorching temperatures (today 40 degrees Celsius) (104 degrees F) are expected to persist through Saturday with very dry air creating a very serious risk of fire outbreaks. do,” according to the statement.

Forest fires in France have been particularly violent this summer, raging in the south and southwest of the country, while also burning in the regions of Normandy and Brittany – further north than usual.

Fires have burned 41,400 hectares in France since June 10, a huge increase from the 2,040 hectares lost in the same period last year, the press office of the French interior ministry’s civil security department told CNN.

Italy, Spain and the UK are also suffering

In Italy, farmers in some parts of the country have lost up to 80% of their harvest this year due to severe weather anomalies, the Colderetti Farming Association said on Thursday.

Drought means the soil hasn’t been able to absorb any rain during recent storms, leading to flooding and landslides, according to Colderty.

Hail was “the most serious weather phenomenon in terms of irreversible crop damage,” the association said, “capable of destroying an entire year’s worth of work in a matter of minutes.”

Farming associations estimate that more than 6 billion euros ($6.2 billion) have been lost, equivalent to 10% of Italy’s annual agricultural output.

Elsewhere in the Mediterranean, Spain’s national weather agency AEMET has warned of high temperatures across Spain as a heatwave continues across the peninsula.

Heat warnings have been issued for various parts of the country on Thursday, with the highest concentration of affected communities in Spain’s northeastern regions near the border with France.

Temperatures are expected to rise to 40C according to AEMET.

Most of the country is covered by heat warnings on Friday, with temperatures above 40 degrees Celsius expected in the north-east and south of Spain.

As the UK suffers another week of high temperatures, the Met Office issued an “amber extreme heat warning” on Tuesday.

“An extreme heat warning, which covers the southern half of England as well as parts of east Wales, will remain in place from Thursday until the end of Sunday, with potential impacts on health, transport and infrastructure,” the Met Office said. In a statement.

Temperatures are expected to peak on Friday and Saturday, with temperatures “likely” to reach the low to mid 30s Celsius (86 to 95 degrees Fahrenheit), according to the statement.