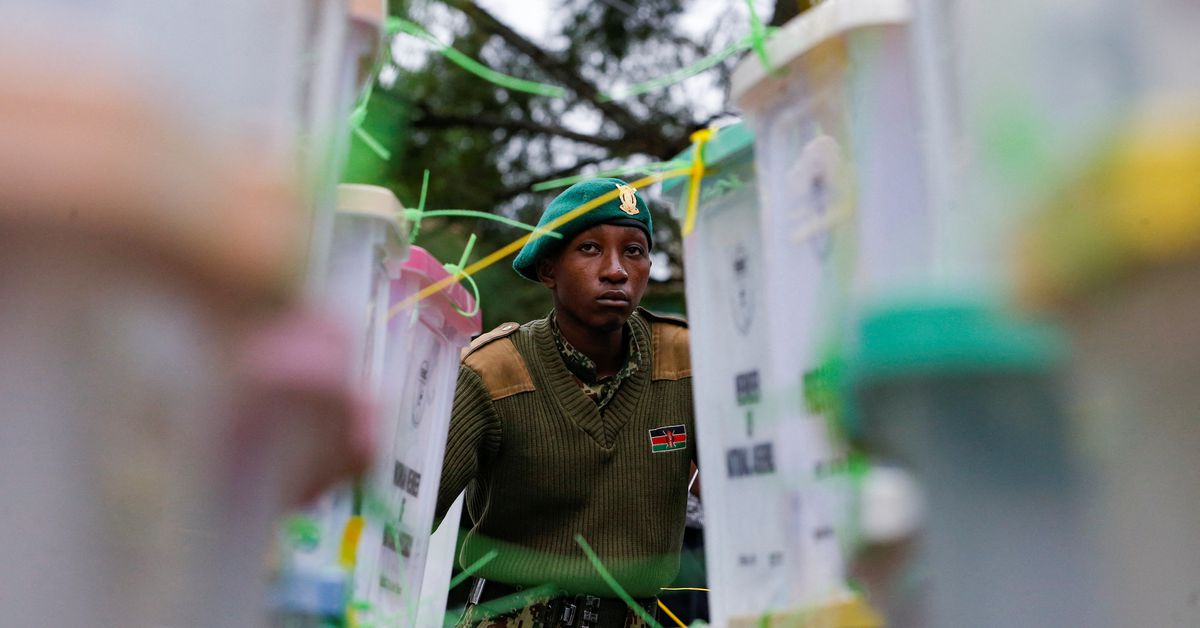 NAIROBI/ELDORET Aug 10 (Reuters) – Kenya’s presidential election primary results showed a tight race between the two main candidates to replace President Uhuru Kenyatta, with citizens praying that the announcement of a winner would not lead to violence like in previous years.

Tuesday’s election is a key test of stability in east Africa’s largest economy, where two of the past three elections have been marred by bloodshed and allegations of rigging.

Tuesday’s vote was largely peaceful, although police said they were chasing a lawmaker who shot a rival’s aide outside a polling station. In the northern town of Eldas, where elections were held up by clashes on Tuesday, polling stations opened peacefully on Wednesday, election officials said.

The presidential frontrunner, Deputy President William Ruto, and veteran opposition leader Raila Odinga are in a close race, results tabulated by Kenyan media have shown. The winning candidate must get 50% plus one vote.

Outgoing President Kenyatta, who has reached his two-term limit, fell out with Ruto after being re-elected in 2017 and endorsed Odinga.

“We are just praying for peace and a good leader,” said Crispin Wasonga, a vegetable seller in the capital.

The Electoral Commission, Independent Electoral and Boundaries Commission (IEBC) posted an image showing result forms from more than 99 percent of the 46,663 polling stations.

The commission only posts pictures, not numbers. Out of 290 constituency-level results, only seven are available on the commission’s website. Constituency result forms have to be tallied on the spot and then physically transported to the National Tallying Center in the capital Nairobi and verified by the Commission before issuing official results.

The cumbersome tallying process was partly the result of a Supreme Court ruling in 2017, which nullified Kenyatta’s initial re-election bid in August that year, citing the commission’s failure to follow procedures to the letter.

The media problem has been a confusing tallying process as contradictory numbers.

Neither counted more than half of the votes, and it was not clear whether they were counting the same portion of the vote as the result forms were uploaded randomly. Academics following the media tally said they found some errors and cautioned that their results are not official.

At the constituency tallying center at the county hall in the western town of Eldoret, green-clad officials shuffled through rows of neatly stacked ballot boxes. Country music played over the sound system but was paused as election officials announced the latest results from each station over a microphone.

In the center of town, crowds of people gathered on the sidewalks, excitedly talking politics.

“We are happy because William Ruto will be our next president!” exclaimed one.

Meanwhile, in Kisumu, central to Odinga, vuvuzelas and whistles fell silent as citizens awaited the outcome.

A final result from the IEBC is expected within days, although legally, it has up to a week.

The turnout was narrow for Kenya on Tuesday, when voters also elected representatives to the legislature and local authorities.

The commission said 65 percent of the 22.1 million registered voters cast their ballots. In the last election in 2017, the voter turnout was almost 80%.

Millions of Kenyans also chose not to register to vote; The commission had hoped to sign up 6 million but received less than half of them.

A number of factors were blamed for the dismal turnout, including drought in the north, which has left more than 4 million Kenyans dependent on food aid, and voter frustration over the government’s failure to address economic problems such as rising food and fuel prices.