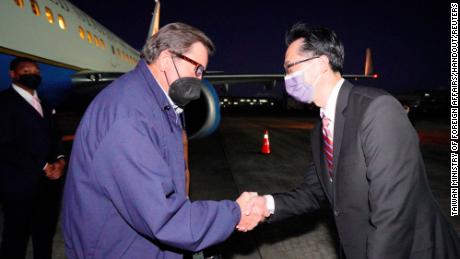 A US congressional delegation led by Sen. Ed Markey arrived in Taipei on Sunday unannounced. A two-day visit It came during a trip by US House Speaker Nancy Pelosi earlier this month.

Pelosi’s visit, the first from a sitting speaker in 25 years, angered Beijing, which responded by launching significant multi-day military exercises around Taiwan.

China’s military said last Wednesday that it had “successfully completed” the exercise, but vowed to “regularly increase patrols” towards the Taiwan Strait.

China’s ruling Chinese Communist Party considers Taiwan part of its territory, though it has never controlled it, and has vowed to “reunify” the island by force if necessary.

Markey’s five-member delegation visited the self-governing island to “reaffirm United States support for Taiwan” and “establish stability and peace across the Taiwan Strait,” a Senate spokesman said in a statement.

At their Monday meeting, Taiwanese President Tsai Ing-wen thanked the delegation for visiting “at an important moment” and for supporting Taiwan with action.

Tsai said Russia’s invasion of Ukraine underscored the threat to the global order posed by the authoritarian regime, and that China’s recent military drills on the island had “seriously disrupted” regional peace and stability.

“Taiwan has not only worked closely with our international allies to keep a close eye on all military movements around us, but has conveyed to the world our determination to maintain the status quo in the Taiwan Strait,” the president said.

Tsai added that Taiwan “wants to further expand our cooperation with the United States and jointly maintain prosperity and stability in the Indo-Pacific region. In the face of global authoritarian expansionism, Taiwan wishes to strengthen trade ties with like-minded democracies and more flexible supply chains.”

In response, Markey praised Tsai’s leadership and said it was his “honor” to stand with Tsai and stand with Taiwan, according to a statement from the president’s office.

“In such uncertain times, we must do more to ensure Taiwan’s peace and stability. We have a moral obligation to proactively prevent any unnecessary conflict. Taiwan has shown incredible patience and prudence in responding to this greatest challenge,” Markey said.

Taiwan’s Foreign Minister Joseph Wu also thanked the delegation for their visit after hosting the group at the Ministry of Foreign Affairs on Monday.

In a statement on Monday, China’s Defense Ministry called the visit by the congressional delegation a “shock visit” that violates China’s sovereignty and territorial integrity.

The military drills by his Eastern Theater Command were a “serious deterrent” to “collusion and provocation” by the US and Taiwan, spokesman Wu Qian said.

Spokesman Wang Wenbin said China urges the US “not to further damage Sino-US relations and peace and stability in the Taiwan Strait”.