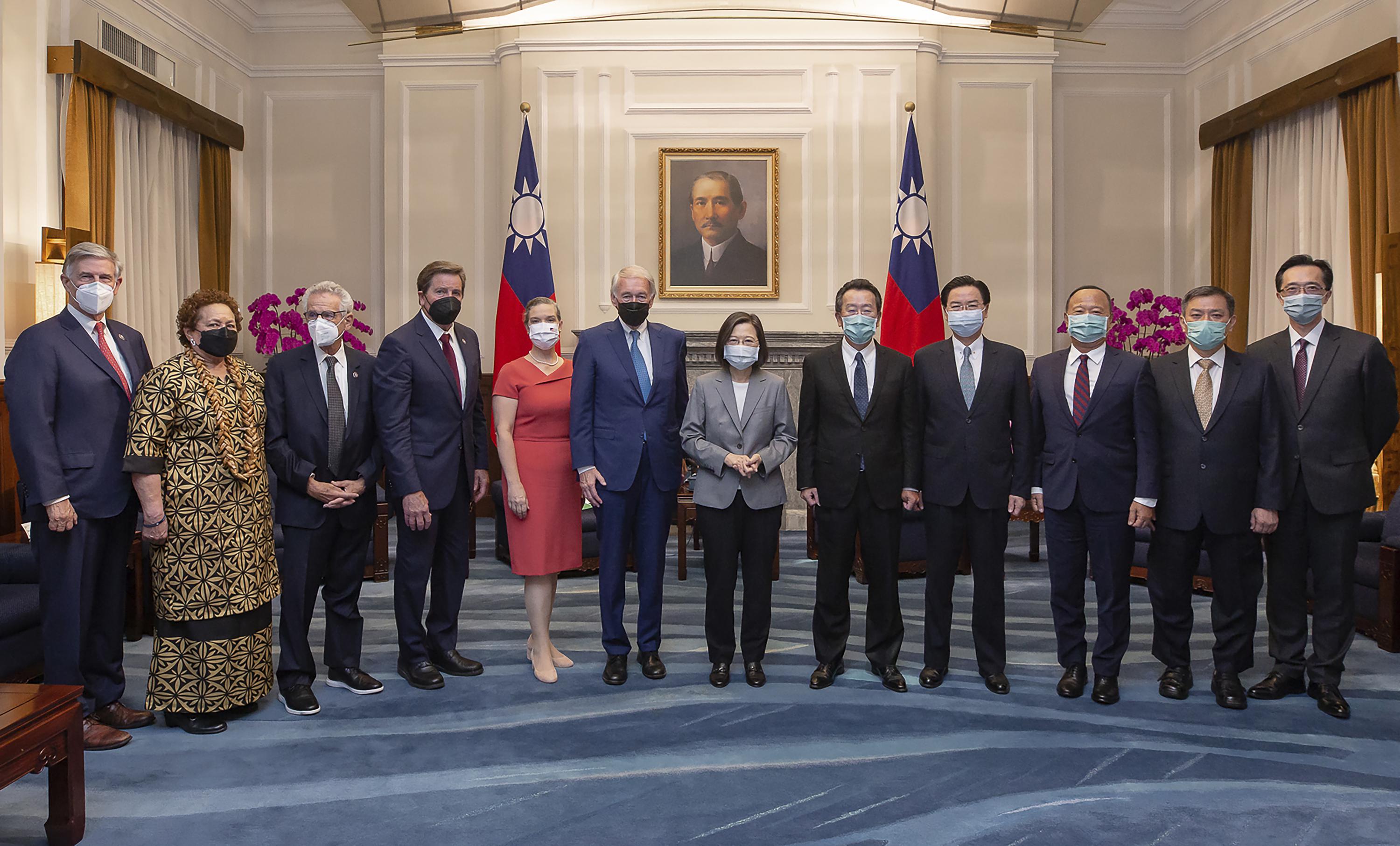 Pelosi was the highest-ranking member of the US administration to visit Taiwan in 25 years, and her visit coincided with nearly two weeks of threatening military exercises by China., which claims the island as its own. In those drills, Beijing fired missiles at the island and across the Taiwan Strait, and sent warplanes and navy ships. Across the center line of the waterway, which is a buffer between the sides that split during the civil war in 1949.

The latest trip started on Sunday with little notice. The delegation was scheduled to leave late on Monday.

China has accused the US of encouraging the island’s independence through arms sales and collusion between US politicians and the island’s government. Washington says it does not support independence, has no formal diplomatic ties with the island and that the two sides must settle their disputes peacefully – but is legally bound to ensure the island can defend itself against any attack.

“China will take firm and tough steps to protect national sovereignty and territorial integrity,” Chinese Foreign Ministry spokesman Wang Wenbin said at a daily briefing on Monday, after Beijing announced new drills in the seas and skies around Taiwan. “A handful of US politicians, in cahoots with Taiwan independence separatist forces, are trying to challenge the one-China principle, which is out of their depth and has failed.”

The Defense Ministry previously said the new drills were aimed at “concrete response and serious deterrence of collusion and provocation between the US and Taiwan”.

It was not clear whether the new drills had already begun as the ministry did not provide any information on where and when they would be held, unlike previous rounds.

US lawmakers, led by Democratic Sen. Ed Markey of Massachusetts, met with President Tsai Ing-wen, Foreign Minister Joseph Wu and lawmakers, according to the American Institute in Taiwan, Washington’s de facto embassy on the island.

At their meeting, Tsai said her administration was working with allies to ensure stability in the Taiwan Strait and maintain the status quo — a reference to the island’s self-rule, separate from Beijing.

“Russia’s invasion of Ukraine earlier this year has shown that authoritarian nations pose a threat to the world order,” Tsai said.

Markey responded by saying Washington and Taipei “have a moral responsibility to do everything to prevent unnecessary conflict, and Taiwan has shown incredible patience and prudence during challenging times”.

The senator highlighted legislation intended to boost political and economic ties with Taiwan, particularly in the critical semiconductor industry. Taiwan is an important supplier of computer chips to the global economy, including China’s high-tech sectors, and beyond the geopolitical risk of rising tensions in the region, an extended crisis in the Taiwan Strait could have a major impact on international supply chains at one time. When the world is already facing disruption and uncertainty.

Markey is one of the few members of Congress who voted for the Taiwan Relations Act of 1979 that ensured continued relations with the island after the US diplomatic recognition switched from Taipei to Beijing. The other members of the delegation are Republican Rep. Aumua Amata Coleman Radwegen, Representative of American Samoa, and Democrats John Garamendi and Alan Lowenthal of California and Don Beyer of Virginia.

China says it wants to use peaceful means to bring Taiwan under its control, but its recent saber rattling has underscored the danger of taking the island by military force. Earlier drills appeared to be rehearsals for a blockade or attack on Taiwan that would force the cancellation of commercial flights and disrupt cargo traffic at Taiwan’s main ports as well as through the Taiwan Strait, one of the world’s busiest shipping lanes.

The exercises prompted Taiwan to keep its military on high alert, but a population used to living in China’s shadow showed widespread defiance or indifference.

Lo Chih-cheng, chairman of Taiwan’s legislature’s foreign affairs and national defense committee, said after the meeting, “The American visit is of great importance at this time, because the Chinese military exercise is (aimed at) dissuading American congressmen from visiting Taiwan.” including US lawmakers.

“His visit this time proves that China cannot prevent politicians from any country from visiting Taiwan, and also sends an important message that the Americans stand by the Taiwanese people,” Lo said.

A senior White House official on Asia policy said last week that China has used Pelosi’s visit to launch an intense pressure campaign against Taiwan, threatening peace and stability in the Taiwan Strait and the wider region.

“China has overreacted and its actions are provocative, destabilizing and unprecedented,” Kurt Campbell, deputy assistant to US President Joe Biden, told reporters on Friday.

Campbell said the US will send warships and aircraft through the Taiwan Strait in the coming weeks and is developing a roadmap for trade talks with Taiwan that the US plans to announce in the coming days.