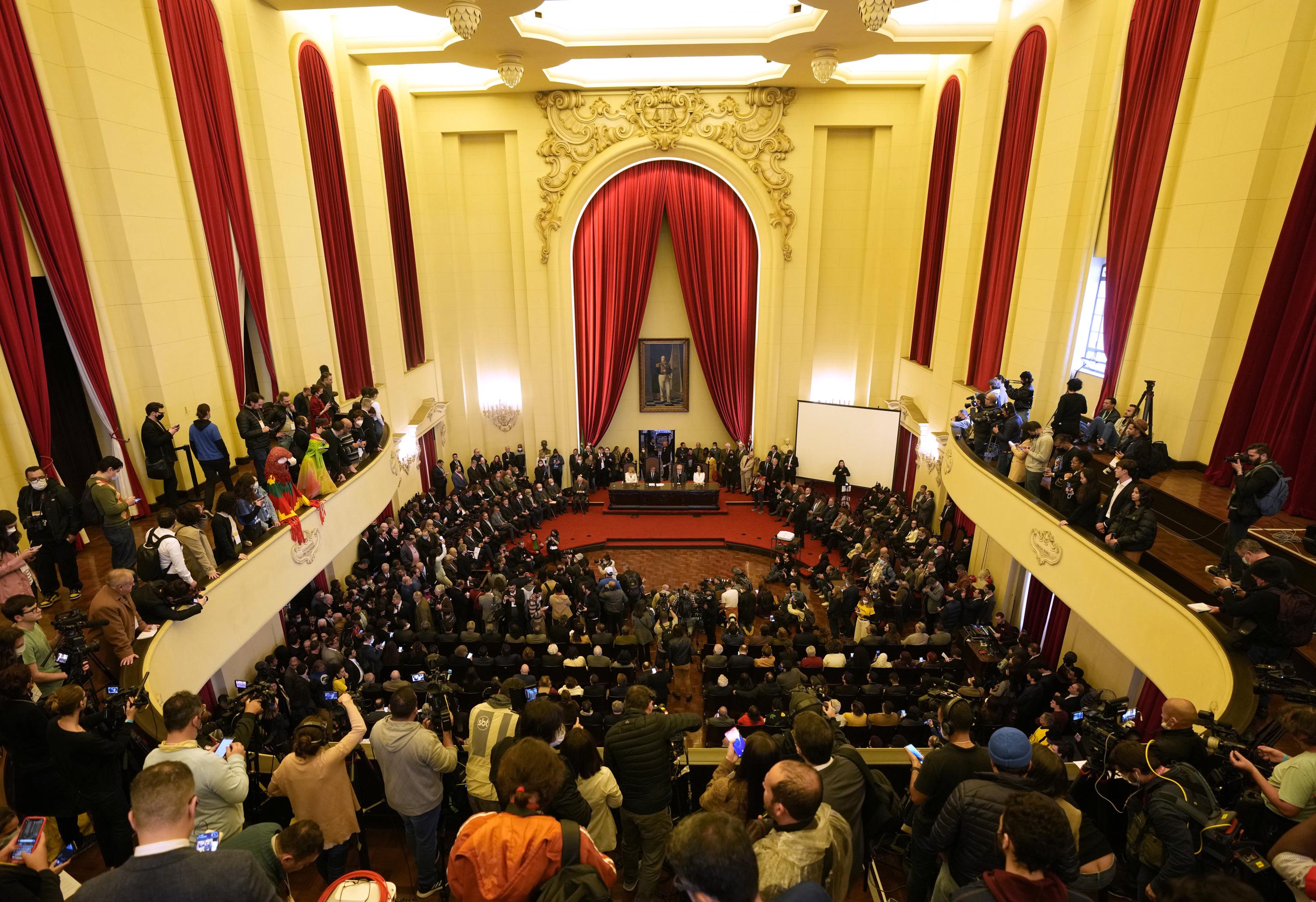 SAO PAULO (AP) – Brazilians flocked to the University of Sao Paulo’s law school to hear a manifesto condemning the brutal military dictatorship and calling for the immediate return of the rule of law.

It was 1977. Nearly 45 years to the day, thousands of people flocked to the same venue Thursday to read two documents inspired by the original “Letter to the Brazilians.” Both new manifestos defend the country’s democratic institutions and electronic voting system, which far-right President Jair Bolsonaro has repeatedly attacked before his re-election bid.

While none of the documents named the officials, analysts say it is largely clear to whom they are directed.

They underline widespread concern that Bolsonaro may follow US President Donald Trump’s lead in rejecting the election results and trying to cling to power. In a country where democracy is only decades old, the specter has encouraged hundreds of thousands of people – even those who had previously refrained from strangulation – to sign the letters. The President not only refused to sign, but downplayed the initiative.

“We are in danger of a coup, so civil society must stand up and fight against it to guarantee democracy,” José Carlos Díaz, a former justice minister who helped write the 1977 letter and the two that were read Thursday, told The Associated Press. press

Inside, hundreds of guests gathered in the university’s Great Hall to listen to the speech, while others stood outside watching on large flat screens.

The first of the new letters, created by law school alumni, has received more than 880,000 signatures since launching online on July 26. Among them are musicians and high-profile bankers, executives and presidential candidates, including Caetano Veloso and Gilberto Gil. Former President Luiz Inacio Lula da Silva, who leads all the polls ahead of the October election, is one of them.

The second document was published in newspapers on August 5 and attracted less public attention, but political analysts told the AP it was more important. It has been endorsed by associations representing hundreds of companies in the banking, oil, construction and transport sectors.

Generally averse to taking a public political stance, companies were clearly concerned that backing down on democratic norms would be bad for business, said Carlos Melo, a professor of political science at Insper University in Sao Paulo.

“The innovation is that areas that have remained neutral, or somewhat favorable to the president, also signed because they saw themselves as a threat,” Mello added. Democracy is important for the economy.

For more than a year, Bolsonaro has claimed that electronic voting machines are prone to fraud, though he has presented no evidence. At one point, he threatened to suspend elections if Congress did not pass a bill to introduce printed receipts of votes. The bill did not pass.

He began calling for more involvement of the armed forces in election supervision and, last week, military officials visited the electoral authority’s headquarters to inspect the source code of voting machines. Bolsonaro has alleged that some of the authority’s top officials are working against him.

When Bolsonaro started his campaign, he urged supporters to take to the streets for September 7 Independence Day celebrations. On that date last year, thousands rallied at his behest, and Bolsonaro told them that only God could remove him from power. He threatened to plunge the country into an institutional crisis by declaring that he would not heed the decisions of the Supreme Court judges. He later backtracked and said his comments were made in the heat of the moment.

Bolsonaro’s rhetoric resonates with his base, but is increasingly alienating him politically, Mello said.

Since last year, the election authority has been active in countering claims against the voting system. His superiors, including Supreme Court judges, have repeatedly issued statements in his defense. Behind the scenes, he has been working overtime to recruit allies in the legislature and the private sector, even as many resent his public pronouncements.

A turning point came last month after Bolsonaro summoned foreign ambassadors to the presidential residence to lecture him on the alleged vulnerabilities of electronic voting. Since then, both congressional leaders and the prosecutor-general, considered a Bolsonaro ally, have expressed confidence in the system’s reliability.

The US also weighed in, with the State Department issuing a statement the day after the ambassadors’ meeting to say Brazil’s electoral system and democratic institutions were a “model for the world”. In a July conference with regional defense ministers in the Brazilian capital Brasilia, US Defense Secretary Lloyd Austin said the military must carry out its duties responsibly, especially during elections.

These letters – which at any other time might have been a dry exercise for the academy – have struck a chord with society. In recent times clips of artists reciting pro-democracy pledges have been aired on television stations and rallies have been held in 21 cities across the country.

One of those invited to speak at the university’s law school was Arminio Fraga, a prominent asset manager and former central bank chief during the center-right administration.

“I am here today, in this room, in this university, with a diverse group that sometimes fought on opposite sides, doing what we can now to preserve what is sacred to all of us. This is our democracy,” said Frega, a Bolsonaro critic.

Dyce, a lawyer and former justice minister, later took to the stage to read the first of two letters, calling the day an “unprecedented moment”.

Bolsonaro, for his part, played down concerns and repeatedly dismissed the manifesto.

“We don’t need any little letter to say we defend democracy, we will fulfill the Constitution,” the president told allied politicians on July 27.

Still, concern about Bolsonaro’s rhetoric has spread among some allies, two cabinet ministers told the AP on condition of anonymity because they were not authorized to discuss the matter publicly.

The minister said it was justified for Bolsonaro supporters to take to the streets, but feared his manner of expression might lead some to believe he was inciting violence. He said Bolsonaro’s impulsiveness and fiery reactions had undermined his efforts to keep the peace between the administration and other institutions.

Bolsonaro’s party has distanced itself from claims that the election may have been compromised. Party vice president Augusto Rosa told the AP that the party leader called for the president of the electoral court to ensure confidence in the voting system.

It will be an uphill battle for Bolsonaro. More than half of those polled by pollster Datafollha said they would not vote for him under any circumstances. But recently low unemployment, lower gasoline prices and higher welfare spending have boosted support. Some polls show da Silva leading by single digits in the first round of voting. A close race will make pre-election promises all the more relevant to respect the results.

Independent political analyst Thomas Trauman said he considered the industry-led manifesto to be the most important document since Brazil’s 1988 constitution: “At this moment it is very important to isolate the rebellion.”