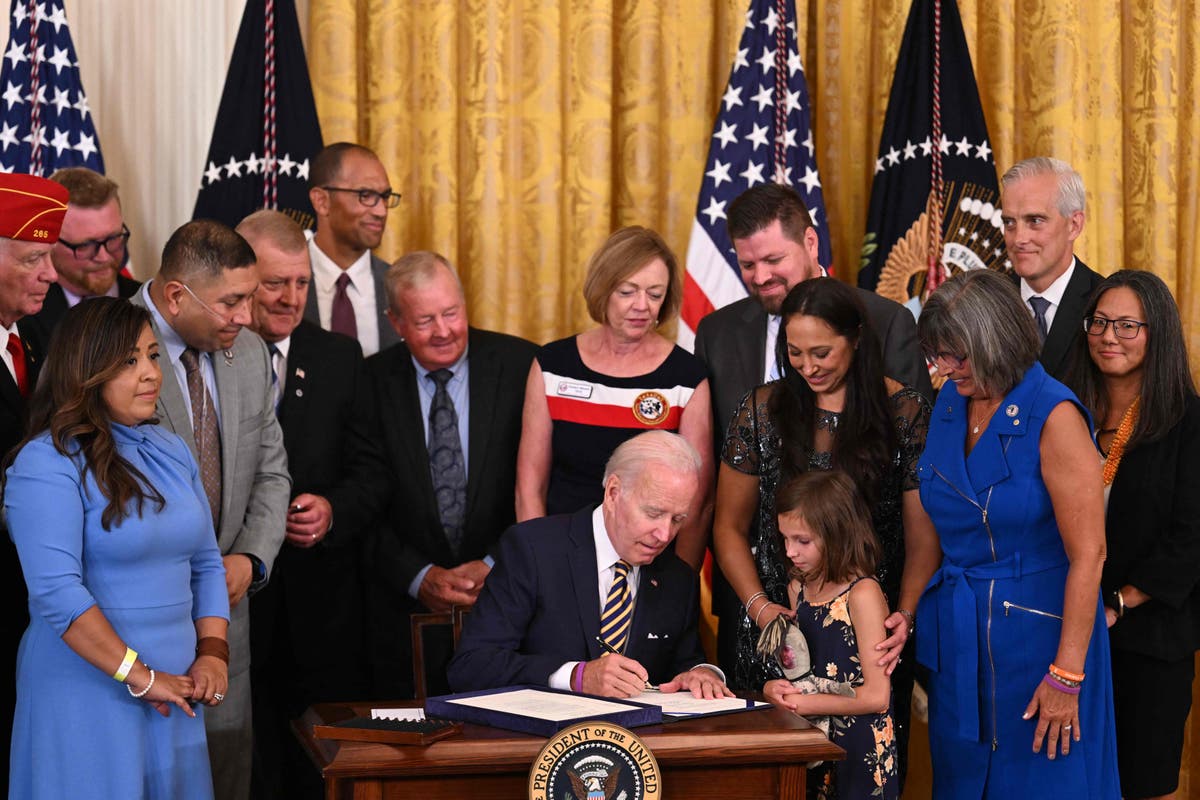 President Joe Biden has signed the PACT Act, which would provide life-saving care to veterans exposed to burn pits.

In remarks at the White House, Mr Biden called it “the most important piece of legislation our country has ever passed to help veterans exposed to toxic substances” and said: “I’m going to do it come hell or high water.”

He added that this was one of the issues where both Republicans and Democrats could work together, thanking members of Congress for their work: “This legislation was long overdue and we got it together.”

The President thanked campaigners and veterans groups who pushed the federal government to act. He especially thanked comedian Jon Stewart: “You refused to forget anyone … Man, we owe you.”

The bipartisan effort is another significant achievement by the president, specifically asking lawmakers to work on such legislation during his State of the Union address.

The full title of the bill is the Sergeant First Class Heath Robinson Honoring Our Promises to Address Comprehensive Toxics (PACT) Act of 2022.

During the State of the Union address, the President shared the story of Sergeant First Class Heath Robinson, who died two years ago of a rare lung cancer caused by toxic exposure in the trenches of Iraq.

On Wednesday, his nine-year-old daughter Brielle, widow Danielle Robinson and mother-in-law Susan Zier joined the president in Washington to sign the bill.

Daniels attended SOTU in March as a guest of first lady Jill Biden, and days later, the PACT Act was named after Heath.

Mr. Biden’s commitment to supporting veterans is deeply personal; He often talks about his late son Beau and his belief that his terminal cancer was caused by burn pits.

Beau was a captain in the Delaware Army National Guard and was deployed to Iraq in 2008, spending much of the next year breathing in a 10-acre burn pit at Balad Air Force Base.

He died in 2015 at the age of 46 after a battle with glioblastoma, an aggressive form of brain cancer.

While signing the bill, the president acknowledged his grandson, who was seated in the audience next to Brielle, saying: “My grandson, his father, [was] Lost in the same charred pits. He knows what you are going through. “

After the signing, Mr. Biden offered Brielle a used pen.

Despite bipartisan efforts, the bill stalled in the Senate when Republicans blocked the legislation on a “budget gimmick” and claimed spending on veterans should be discretionary and not mandatory.

Several GOP lawmakers who had previously supported the bill changed their votes and it failed 55-42, five short of the 60 votes needed, sparking outrage from campaigners including Mr. Stewart.

After footage emerged of Republican senators celebrating their defeat on the Senate floor, Mr Stewart blasted them as “disgusting” for “celebrating their victory over veterans with cancer”.

“Way to go, guys! You finally handed over to the ‘big veteran with cancer’. Well done,” he mocked them.

Advocates in the Senate worked to convince their colleagues of the importance of the bill and that the spending should be mandatory so that veterans groups would not effectively have to come to Washington and beg for their money every year.

Once the funding scare was over, a vote was set for August 3, and only 11 senators opposed the bill, sending it to the president’s desk for signature.

This is the third major piece of legislation signed by President Biden in two days, with the inflation-reducing legislation expected to pass the House later this week and be signed into law soon.