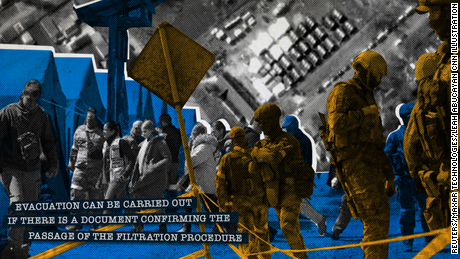 Researchers say the sites are used by Russian forces and their allies to process, register, interrogate and detain Ukrainians trying to leave Russian-occupied territory. Detainees may include civilians and prisoners of war.

The Yale School of Public Health’s Humanitarian Research Laboratory (Yale HRL) in collaboration with the US State Department-supported Conflict Observatory used open-source information and high-resolution satellite imagery to create their map. of

According to the report, there is evidence that it was established before the start of Russia’s invasion of Ukraine and escalated after the capture of Mariupol in April.

“The conditions reported by those released from the facilities examined here may constitute cruel, inhuman and degrading treatment under international humanitarian and human rights law,” the study said, adding, “Conditions include overcrowded facilities, lack of adequate sanitation, inadequate food and clean water, exposure to the elements, Denial of medical care and use of isolation.”

“In certain instances, treatment such as the use of electric shocks, extreme conditions of isolation and physical assault are described as having been endured by those released, potentially amounting to torture if proven,” the study said.

In a separate press release on Thursday, the US State Department described the “illegal transfer and deportation of protected persons” described in the study as “a serious violation of the Fourth Geneva Convention on the Protection of Civilians and a war crime”.

Volnovakha Correctional Colony is one of the sites described in the study. Detailed findings allege that this is a long-term facility for unfiltered prisoners of war who surrendered after the siege of the Azovstal steel plant.

The study openly records the accounts of survivors who described, among other things: overcrowded cells, forced labor and even torture. Yale HRL says it identified two areas of disturbed earth along the south and southwest sides of the facility that appear to be mass graves. of

One account cited in a report by someone described as a “survivor” claimed that the cellmate was working inside the colony digging graves. There was a deadly explosion there in July that Ukrainian separatists say killed 53 militants, but the satellite images used for this report are earlier.

The Yale study noted that “without further investigation, including the ability to independently excavate these locations, no definitive determination can be made about what these sites may contain based on the evidence in this report.”

Speaking to CNN earlier this year Many Ukrainians Those who went through “filtration” described facing threats and insults during the process. He says he was asked about his politics, future plans and views on war. Some people who spoke to CNN said they knew of others who had been picked up by the Russian military or separatist fighters and disappeared without a trace.
The Kremlin has denied using the so-called Filtration camps To cover up misdeeds in Mariupol and target civilians.

In the Yale study, the Russian embassy in Washington said the system is “about checkpoints for civilians leaving active combat zones. To avoid sabotage operations by battalions of Ukrainian nationalists, Russian soldiers carefully inspect vehicles entering safe territory.” It adds that it will “detain bandits and fascists” and that the Russian military does not create obstacles for civilians but helps them with food and medicine.

In a CNN report from July, Dmitry Vachenko, an official at Russia’s Emergencies Ministry in Taganrog, said housing would be provided to Ukrainians, who are free to find work and send their children to school.

“When hostilities end in the future, all these arrivals can decide to return to their homeland. Those who want to stay in Russia, the Russian government undertakes that — they will receive and be protected by a full range of social services,” he said.

Asked about the process of allowing refugees into Russia, he said there are “filtration points” at the border.

“They are investigating people who have acted aggressively towards the Russian Federation,” he said. “Filtering is exact upon arrival, there are no ‘mass camps’. They are border crossing points, nothing more.”

The self-proclaimed DPR has denied allegations of illegal detention, internment and abuse of Ukrainian citizens by Ukrainian authorities, saying people in so-called “reception centers” are properly fed and given medical attention.

According to the study’s methodology, “Each source was evaluated using criteria established by the Berkeley Protocol on Digital Open Source Investigations.”

It added that the data points were “cross-referenced against recent very high-resolution satellite imagery. Five independent sources had to confirm the location of the site and the filtration activity that occurred there for the site to be included in the report. Twenty-one sites met or exceeded that threshold.”