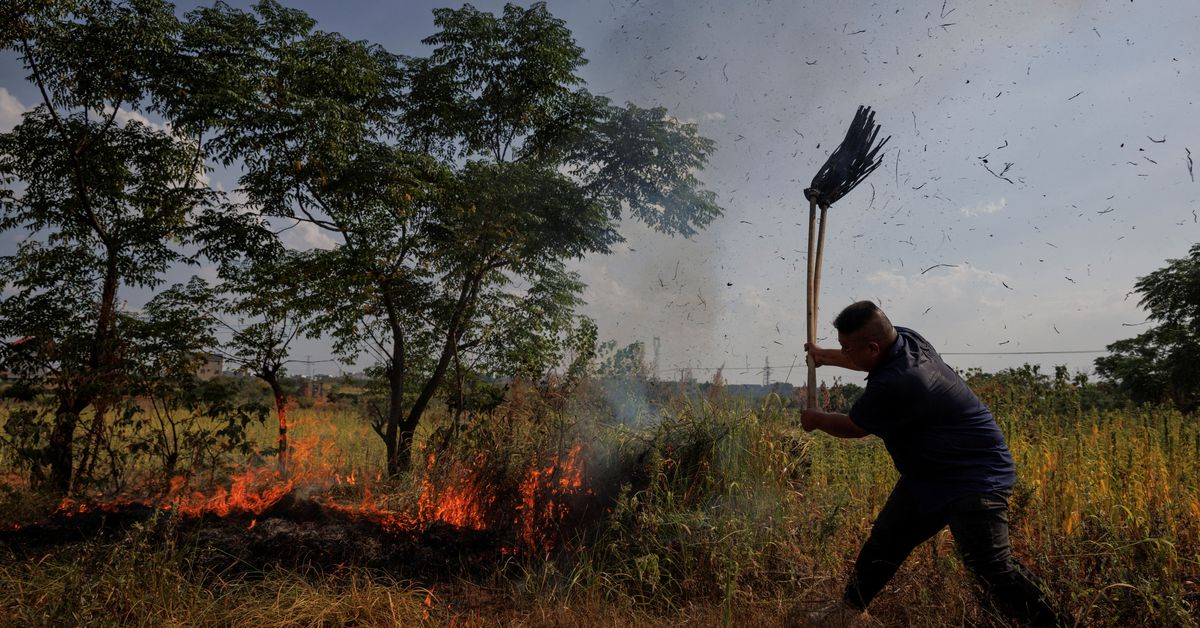 NANCHANG, China, Aug 25 (Reuters) – As China’s record heat wave begins to subside, farmers are assessing the damage from a prolonged drought and the government is urging them to replant or replace as many crops as possible.

More than 70 days of high temperatures and low rainfall have wreaked havoc in the Yangtze River basin, which supports more than 450 million people and a third of the country’s crops.

Although rain is expected in the next 10 days, farmers near the parched Poyang Lake in central China’s Jiangxi province, normally a flood outlet for the Yangtze, worry that the heat has already taken its toll.

The agriculture ministry on Tuesday urged farmers to harvest and store rice through an emergency advisory and take action to strengthen growth of the grain in the coming weeks. In areas where the drought has already done heavy damage, farmers are encouraged to switch to late-autumn crops like sweet potatoes, but that’s not an easy task.

“With no land, we can’t switch to other crops,” said Hu Baolin, a 70-year-old farmer from a village outside Nanchang, Jiangxi’s provincial capital.

He said his plants, including rapeseed oil and sesame, were much less developed than in normal years, and his pomelos were only a third of their usual size.

Nearby wells were largely dry, and goose pieces lay around the lake, which had completely dried up about 10 days ago. Villagers were also battling a brush fire nearby.

“Don’t let people see it and think I brought you here on purpose. You can go anywhere (in this village), it’s all the same.”

The Agriculture Ministry said on Tuesday that the hot weather posed a “serious threat” to autumn grain production and called on local governments to do “everything possible” to find more water. Read on

Drones were deployed to seed clouds and rain in China’s southwestern Sichuan province on Thursday, while other regions, including the Yangtze, mobilized firefighters to spray parched crops, state broadcaster CCTV said.

A villager tries to put out a brush fire during drought in Xinyao village, Nanchang city, Jiangxi province, China, on August 25, 2022. REUTERS/Thomas Peter

“I think the biggest impact of the heat wave is going to be on the rice crop – corn is also having problems but not as much,” said Ole Hugh, director of advisory services at agricultural brokerage IKON Commodities in Sydney.

China, the world’s largest rice consumer and importer, was expected to import a record 6 million tonnes in 2022/23, according to US Department of Agriculture estimates.

Chongqing and Sichuan provinces in the southwest were hit after more than two weeks of temperatures exceeding 40 Celsius (104 Fahrenheit) – causing crop damage, forest fires and power rationing. Read on

Factories in Chongqing were ordered to limit output from Aug. 17 to Aug. 24 to conserve power, but the curbs have now been extended and normal operations will not resume until weather conditions improve and authorities resume operations. Read on

Although national forecasters lowered their heat warning level from “red” to “orange” from Tuesday, temperatures in Chongqing, neighboring Sichuan and other parts of the Yangtze Delta are expected to exceed 40C by the weekend.

Lower reaches of the Yangtze, including Zhejiang and Jiangsu on the eastern coast, have also been affected by low rainfall.

Despite diverting 500 million cubic meters of the Yangtze River since mid-July, water levels in Lake Tai, sandwiched between the two provinces, have dropped to their lowest level in 20 years, the Ministry of Water Resources said Thursday.

China’s Ministry of Water said on August 11 that the drought has affected nearly 33 million mu (22,000 square kilometers) of arable land and 350,000 livestock, but the final impact is likely to be far greater.