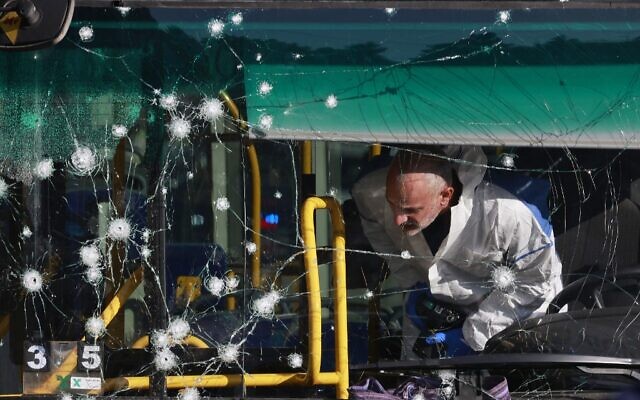 Two explosions at two bus stops near the entrance to Jerusalem on Wednesday morning killed one person and wounded at least 18, police and medics said.

Police have described the blasts as terrorist bombings.

Medical officials said that 12 people at the bus stop were injured in the blast and two of them are in critical condition.

A second explosion occurred shortly after 7:30 a.m. at the Ramot Junction, another gateway to Jerusalem.

An Israeli forensic expert works at the scene of an explosion at a bus stop in Jerusalem on November 23, 2022. (Menheim Kahana / AFP)

In the second blast, three suffered minor injuries and four were taken to a hospital in critical condition, doctors said.

According to initial Hebrew-language reports, the blast was believed to have been caused by an explosive device left in a bag.

Israeli Police Commissioner Kobi Shabtai visited the scene and said that there were two attackers.

“It’s a framework of attack that we haven’t seen in years,” Shabtai said.

He urged the public to be vigilant about suspicious packages and said authorities were scanning the city for other possible devices.

There are no immediate claims of liability.

Security services combed the area in an attempt to track down suspects linked to the blasts.

Police said they had closed the Route 1 highway after the first explosion.

Public Security Minister Omer Barlev spoke with the police chief and was expected to visit the sites of the attacks, his office said.

Following the attack, Defense Minister Benny Gantz held an assessment with the head of the Shin Bet security agency, the deputy army chief and other senior military and police officials. 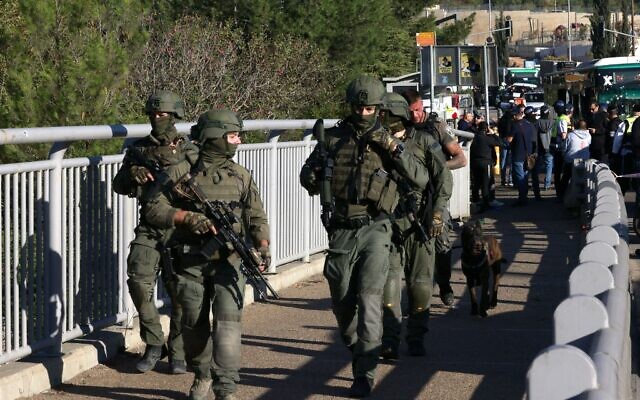 Israeli security forces walk in Jerusalem after an explosion at a bus stop on November 23, 2022 (Menahem Kahana / AFP)

The explosions come amid heightened tensions, following a series of Palestinian attacks in Israel and the West Bank that have killed 29 people since the start of the year.

In recent months there have been several stabbings and attempted stabbings in Jerusalem, mostly in the Old City. Last month, an Israeli soldier was killed by a Palestinian gunman at a checkpoint near Jerusalem.

In the spring, the military launched a major counter-terrorism operation in the West Bank following the attack.

The operation has led to more than 2,000 arrests in almost nightly raids, but more than 130 Palestinians have died, many – but not all – of them in attacks or clashes with security forces.

Bombings of buses and public places were a feature of the second intifada from 2000 to 2005, but have largely subsided over the past 17 years, which Israeli officials attribute to increased security measures and better intelligence, including the West Bank security barrier.

In 2016, the terrorist organization Hamas was accused Bus bombing in Jerusalem21 people have been injured. And in 2011, a bomb hidden in a backpack exploded at a bus stop outside the Jerusalem International Convention Center, killing two and injuring dozens more.

This is a developing story.

I joined The Times of Israel after covering US and Israeli politics for Hebrew news outlets.

I believe that responsible coverage of Israeli politicians means presenting a 360-degree view of their words and actions—not just reporting what happens, but what it means in the broader context of Israeli society and the region.

This is hard to do because you can rarely take politicians at face value – you need to go the extra mile to present the full context and try to overcome your own biases.

I am proud of our work that tells the story of Israeli politics Straightforward and comprehensive. I believe that Israel is stronger and more democratic when professional journalists do that difficult job well.

Support our work by joining The Times of Israel Community It helps ensure that we can continue to do so.